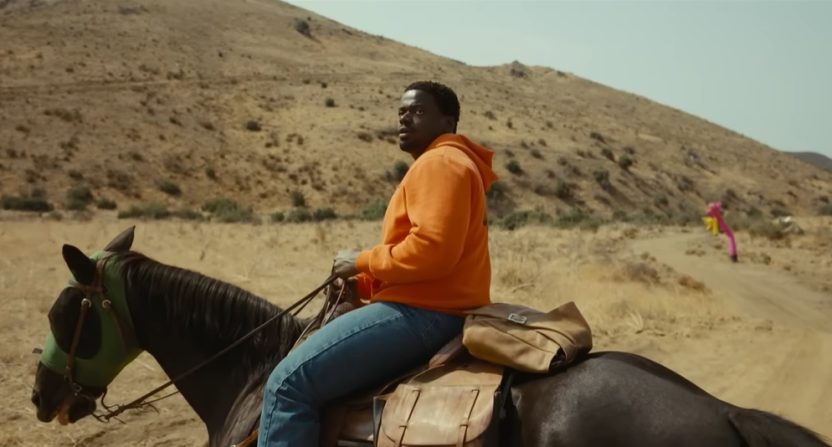 There’s a lot to unpack in Jordan Peele’s Nope. The third film from the horror visionary is his most complex yet. It’s not as easily digestible as his previous works.

Get Out highlighted liberal racism. Us examined the Haves vs. the Have Nots. Nope is more of a Rorschach test. Your experience may vary. We’re not going to spoil the movie for you. But it will be interesting to observe what audiences see. Will it be cultural appropriation, America’s hunger for spectacles, or the foolhardy desire to try and control nature for profit?

All of those possibilities might be right. All may be wrong.

Like any good director, Peele isn’t going to explain away every single detail. An artist’s job is to create something that sparks conversation. It’s the audience’s job to draw their own conclusions. And no artist forces us to think quite like Peele — one of the few bankable original filmmakers, alongside Christopher Nolan and Quentin Tarantino.

Look at the 10 highest-grossing films in the U.S. The top eight are either sequels or reboots. The other two are Uncharted (based on a video game) and Elvis (biopic). If Nope cracks that list, it will be the only one not created from existing intellectual property rights. Peele’s uncanny ability to create fresh content in an industry that relies too heavily on recycled fare is gratefully appreciated.

Despite modest budgets, Peele’s previous two films turned in huge profits. Nope’s $68 million budget is over three times what Us cost. Early returns are promising. It was No. 1 at the box office over the weekend, grossing $44 million. It was, however, behind Us’s $71 million debut in 2019. Now, is that because theatre-going habits are different in a pandemic world? Or does that drop-off mean something significant? It will be interesting to watch.

Repeat viewings drive box-office dollars. And certainly, a second viewing of Nope would help untangle exactly what’s going on. The opening alone is a bit of a head-scratcher that’s not fully explained to our satisfaction. It’s a traumatic backstory to one of the characters (Steven Yeun’s Ricky) who was a former child star on a 1990s sitcom.

The crux of the story has to do with siblings played by Daniel Kaluuya (OJ, yup that’s his name) and Keke Palmer (Emerald), who are running the family business of providing horses for television and movie productions. Soon they learn about the presence of an extraterrestrial on their California ranch. To prove the existence of this phenomenon, they try to capture the UFO on film.

That’s the plot in a nutshell. Unfortunately, the setup takes a long time. Peele is asking for patience from his audience, and he’s earned the benefit of the doubt. But it takes a while for the action in Nope to get going. When it does, it’s quite a ride.

Like any good auteur, Peele gets the most out of his actors. The breakout star here is Palmer, who’s a jolt of electricity. She’s an energetic hero who is easy to root for. Palmer helps set the tone by revealing an educational story about the history of the family business, which is based on a true story. You see this in the trailer. Palmer is also fearless in the movie’s exciting climax, which is best experienced on an IMAX screen.

Visually, this is easily Peele’s most impressive feature. The scenery feels big and wide open. Kudos to cinematographer Hoyte Van Hoytema, who’s best known for his work with Nolan in Interstellar, Dunkirk, and Tenet.

At times, Nope feels like an homage to Steven Spielberg’s early films with references to Close Encounters of the Third Kind and Jaws. But Peele, of course, digs deeper. He’s interested in the racial and social dynamics of what people are willing to do when there’s a UFO in their backyard. His view of what happens to human beings and the choices they make are at the root of Nope.

It’s fascinating to debate, but audiences may struggle to connect to Nope as easily as they did to Get Out or Us. Critics love this movie. It will be curious to see how regular folks respond in the coming weeks.

This film challenges us, but do we just want to be entertained? Your answer might determine how you feel about Nope.