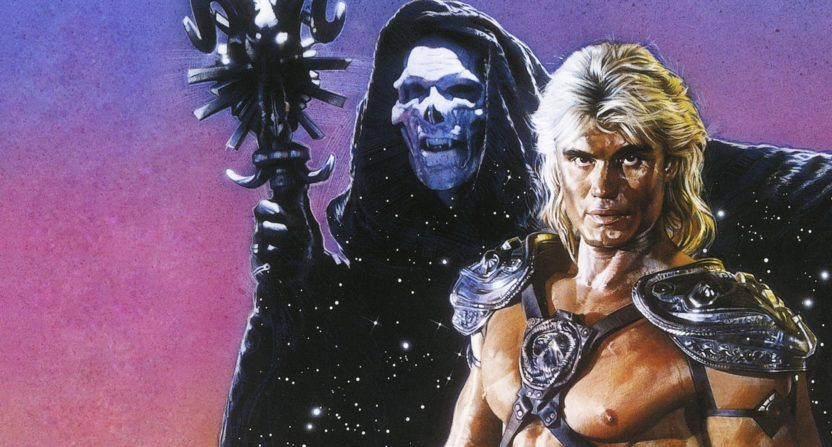 In an alternate universe out there, the world is eagerly anticipating the latest installment from the highly successful He-Man Cinematic Universe. It began with He-Man, followed of course by He-Man 2: She-Ra Rising. The original trilogy culminated with Masters of the Universe. That was inevitably followed by a She-Ra spinoff, a prequel about how Skeletor became an angry dude with a skull for a head and maybe even some kind of Suicide Squad-esque side story involving Beast Man, Evil-Lyn, Tri-Klops, and Trap Jaw. And then we’d continue the main film series with an even bigger scope in something we’ll call Greyskull. And so on…

Sure, that sounds ridiculous. But does it really sound that much more ridiculous than the actual Transformers film franchise? The series already includes five films with a Bumblebee spinoff in the works. Despite what you probably think of the quality, they’ve amassed $4.2 billion in box office to date. There’s also the Power Rangers movie franchise, which may still get a sequel in spite of a poor showing for the initial film. All of this is to say nothing of the impending Hasbro Cinematic Universe.

For various reasons, perhaps none so paramount as the lack of enduring appreciation of the title character, the He-Man Cinematic Universe will have to succeed in another timeline because it doesn’t look like something that’s going to happen anytime soon in ours (a reboot has been in the works for over a decade), but always seems to get pushed back). One of those reasons also has to be just how muddy the franchise’s first cinematic foray went when it premiered in theaters 30 years ago.

To understand what went wrong with 1987’s Masters of the Universe, you have to understand the company behind the film. Much has already been written and said about Cannon Films, but what you need to know is that owners Menahem Golan and Yoram Globus had a very specific business model. They would churn out B-movies and action films made from questionable scripts with the hopes that star power and marketing would turn them into hits. You might not be too surprised to learn that Cannon ceased to exist by the early 1990s.

While you could make the case that 1985’s bomb Lifeforce was the quintessential Cannon release (semi-recognizable director, semi-recognizable cast, terrible script, overhyped as “”the cinematic sci-fi event of the ’80s”), Masters of the Universe stands out as the shining example of the company’s “let’s just do it and be legends” methodology.

Dubbed “the Star Wars of the 80s” by Cannon before it was released, MotU was ahead of its time in that it ushered in the impending era of toy and comic book adaptations to the big screen. Had it been a success, who knows what could have happened as Cannon also held the rights to Spider-Man and Captain America (of which they did make a very bad direct-to-video movie). The era of the superhero movie could have begun way before schedule and we’d have a lot more shoddy CGI and costumes to answer for.

It might be hard to remember, but He-Man was a big deal in the mid-1980s. The top-selling toy line on the market (outpacing even Barbie) spawned a hit cartoon, a DC Comics series, and animated movies. A live-action adaptation seemed like a no-brainer.

In SlashFilm’s fantastic oral history of the product and production, the people behind the scenes admit something that you’ve probably assumed for 30 years. Dolph Lundgren, fresh off the success of Rocky IV, was cast as the titular hero because he looked like him, without any regard as to whether or not he could actually act the part. There’s a reason he only has a handful of lines in his breakout performance. Director Gary Goddard said that he tried to convince the studio to hire another actor to dub the voice, but they said no.

As the story goes, Sylvester Stallone visited the set of the film and upon discovering Lundgren had been given a part that required extensive talking in English, he turned to an executive on hand and asked, “You gave that guy dialogue?” When Sly Stallone is concerned with your lead actor’s pronunciation, you’ve set yourself up for failure.

One decision  producers made which could have counteracted that one was the hiring of Frank Langella as Skeletor. To be fair, Langella is the best thing about Masters of the Universe, chewing up scenery like he’s at an all-you-can-eat buffet. The decorated thespian took the role because his four-year-old son loved He-Man and to this day, he says it’s one of his favorite roles. That’s clear to see, even if everything around him feels cheap and beneath his talents.

If you grew up in the 80s and owned your fair share of He-Man toys, you were probably confused to see the film spend most of its runtime on Earth and not Eternia. Like so many issues in the film, financial considerations drove that decision. The company was simply unwilling to invest in a believable set for another world full of strange creatures and ominous castles. Instead, Goddard was able to convince Golan and Globus to pay for the throne room set that bookends the film to at least spend a modicum of time on the planet where the characters are actually from. The only saving grace from spending so much time on Earth is that we get a helping of iconic 80s curmudgeon James Tolkan complaining his way through the film.

While certain characters were carried through from the cartoon (Man-At-Arms, Teela, Evil-Lyn), others were created wholesale to compensate for the strained budget. Out was the floating wizard Orko and in was inventor Gwildor. There was no way they’d be able to pull off Cringer/Battle Cat, He-Man’s faithful animal companion, as well.

When those decisions were done and the film was made, all of those budget concerns and cut corners were evident in every scene. Costumes seem ill-fitting and awkward. When not in the capable hands of Frank Langella, the dialogue is clunky. The special effects are, even by 1987 standards, shoddy and distracting.

Even with all the problems, it’s a miracle the final product seemed as complete as it was. Cannon was already in the process of going out of business and fought Goddard at every turn for more money, even to the point where the climactic battle between He-Man and Skeletor almost didn’t happen. The producers were forced to work out a deal to forgo an outstanding rights payment just to get the money to film the finale. Who knows what it would have looked like without that.

By the time Masters of the Universe came out, it was up against its own failings (reviews were harsh and unforgiving) as well as the beginning of the end for the He-Man toy franchise. The film opened in third place, garnering $4,883,168 in its opening weekend. Less than a month later, it was basically out of theaters having earned just over $17,000,000. The Star Wars of the 80s, it was not.

As for those involved, it went mostly as expected. Goddard never directed another major motion picture, but did find success as the CEO of an entertainment design firm for theme parks. Lundgren’s movie career faded and he spent most of the 1990s and 2000s as a lynchpin of the direct-to-video action film market, though he’s seen a bit of a career resurgence, thanks to The Expendables series. Coupled with the failure of Superman IV, this film helped put the nail in Cannon Films’ coffin, saving us from many more terrible adaptations of popular pop culture properties. The only people involved whose careers flourished in the years after were Langella and Courteney Cox, who would probably prefer that you forgot she was in this.

The legacy of Masters of the Universe isn’t complete until you also discuss the plans for its sequel. Skeletor’s survival at the end of the credits set up what was supposed to be known as Masters of the Universe 2: Cyborg (seriously) and would have turned Earth into a post-apocalyptic wasteland ruled by Skeletor (seriously) featuring pro surfer Laird Hamilton as He-Man (seriously), who has returned to Earth disguised as an NFL quarterback (seriously). Oh, and it was going to be filmed consecutively with a Spider-Man movie on the same set (seriously). The project was abandoned when Cannon refused to pay licensing fees to Mattel but the production happened anyway, resulting in the Jean-Claude Van Damme vehicle Cyborg (seriously).

As terrible as the end result might be, Masters of the Universe’s terribleness was an essential result that needed to happen in order to prevent so many further terrible things from happening. And for that, we salute you, He-Man, for sacrificing the financial possibilities of your intellectual property so that so many others could fulfill theirs.