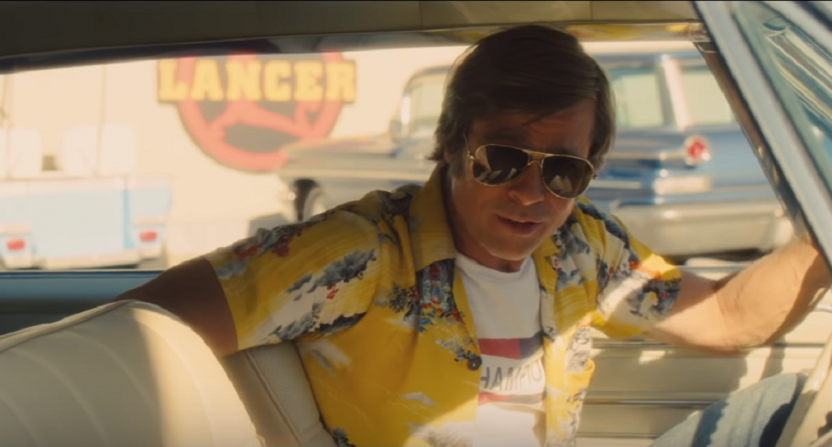 He’s all washboard abs, tanned, and hunky. Viewers of Once Upon a Time in Hollywood either chuckled softly or whistled enthusiastically. This beefcake scene felt like a playful wink to show that the 55-year-old has still got it.

Sex was created by Quentin Tarantino for all of the people in the movie theatre who got to watch Brad Pitt shirtless, fixing an antenna on a roof pic.twitter.com/SEqj44hEon

It’s been two decades since Pitt became the first person to be named People magazine’s Sexiest Man Alive twice (1995, 2000). But Pitt wouldn’t have lasted this long in Hollywood if he were merely a pretty face with a pretty body. Good looks can only get you so far. Beauty fades. Actors peak.

Quentin Tarantino’s latest film, Once Upon a Time In Hollywood, is about an aging actor Leonardo DiCaprio (Rick Dalton) and his stunt double Cliff Booth (Pitt) coming to grips with a changing entertainment industry. In real life, Pitt might have a slightly better appreciation of this fickleness than the 44-year-old DiCaprio. Perhaps that explains why he has spent more time behind the camera (as a producer) over the past decade than in front of the camera.

Pitt’s peers – Tom Cruise, Robert Downey, Jr., Will Smith, Johnny Depp – have immersed themselves in blockbusters to stay relevant. They are action stars, comic book heroes, and franchise film headliners. Don’t knock it. It’s steady work with a great paycheck. But commercial vehicles don’t seem appealing to Pitt. He’s chosen his roles carefully and dedicated himself to movies of substance.

As an actor, Pitt is a three-time Oscars nominee. One for best supporting actor: Twelve Monkeys (1995). And two for best actor: The Curious Case of Benjamin Button (2008) and Moneyball. Once Upon a Time In Hollywood might be his best chance at winning an acting Academy Award. That would be something that neither Cruise, Downey, Smith, or Depp have accomplished.

Pitt is THE reason to see Once Upon a Time In Hollywood.

Sure, there are many good performances. (Tarantino’s strength has always been getting the most out of actors). The recreation of 1969 Los Angeles is breathtaking. And the climax is terrific. But Pitt is the one guy who immediately sparkles on screen. He’s compelling as Booth, who’s more than Dalton’s stuntman. He’s Dalton’s best friend, cheerleader, and gofer.

This is a different kind of role for Pitt. Booth is reserved and thoughtful, but also resourceful and rough. He’s good at his craft, but you wouldn’t call him successful. He’s solely dependent on Dalton for financial support and lives in a trailer with his trusty pit bull. You don’t ever feel sorry for Booth. He’s not a loser. He can take care of himself (Tarantino establishes this fact when Booth gets into a fight with Bruce Lee.).  He’s a bit of a mystery man with a hint of danger, once accused of a heinous crime.

Pitt is at his best in two of the film’s most memorable scenes: his first encounter with the Manson family and the movie’s finale. He displays a calmness, but with a sense of urgency as he searches for a senior citizen who might be in trouble. Later, he delivers lines with impeccable comic timing despite the immediate danger he’s facing. We’ve almost forgotten how funny Pitt can be. We haven’t had a chance to see him be this hilarious since Burn After Reading (2008).

Pitt’s Booth is more than the unknown stuntman who makes DiCaprio’s Dalton look so fine. He’s the most interesting character in the film. The performance of Pitt also calls attention to the underappreciated role of stunt doubles. The Academy of Motion Picture Arts and Sciences gives out Oscars for acting, directing, editing, cinematography, special effects, costumes, and makeup. But there isn’t a category for stuntmen and stuntwomen who often risk their lives.

Tarantino has recognized them in the past, particularly by casting Zoë Bell (Uma Thurman’s stunt double for the Kill Bill movies) as an actress in Death Proof (2007) and The Hateful Eight (2015). She’s also in Once Upon a Time In Hollywood.

Pitt’s presence has sparked a dialogue about giving stunt doubles their proper due.

If he’s nominated, can Pitt win an Oscar? His best chance might be in the Best Supporting Actor category so he can avoid competing against DiCaprio. Pitt’s also getting some Oscar buzz for his lead role in Ad Astra which will be released in September.

What an amazing life for Pitt. He’s been married to two superstar actresses – Jennifer Aniston and Angelina Jolie. Now, he might be on the verge of becoming a two-time Oscar recipient – each in a different discipline.

Now that’s something worth taking your shirt off for.