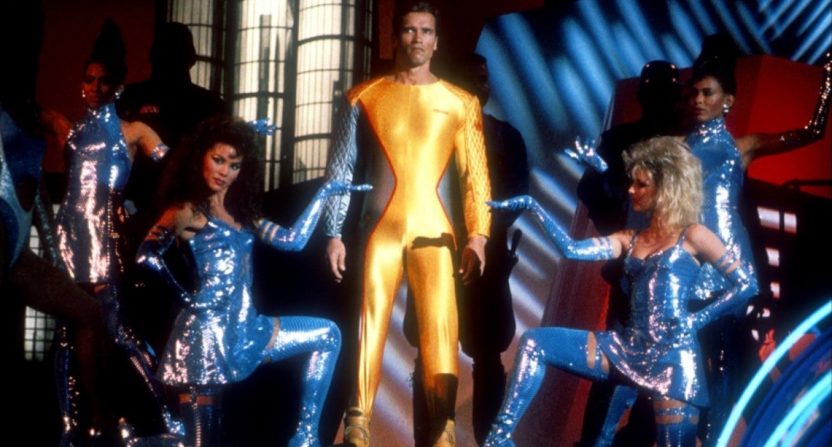 In 2017, the United States is now a totalitarian police state. All entertainment and news programming is controlled by the government and is therefore catered to the whims and desires of those in control. Anyone who resists or disobeys is either sent to prison or killed. The most popular television show is called The Running Man, a reality-based competition where convicted criminals compete against “stalkers” to survive while the audience bets on the outcome to win prizes. Also, there’s a dance troupe in the studio for some reason.

No, that’s not the real world (much as you can cherry-pick some of those details and draw parallels). That’s the world of The Running Man, the 1987 movie starring Arnold Schwarzenegger, based on a book by Richard Bachman, a.k.a. Stephen King. The quintessential 80s action movie was released in theaters 30 years ago on Nov. 13 to middling success at the box office ($38 million on a $27 million budget), but later became a cultural touchstone thanks to a countless number of broadcasts across HBO, TBS, USA, and who knows how many other local networks.

In January, Daniel Oberhaus wrote about the film for Vice, saying that the film’s “depiction of the hyper-militarization of America and the blending of reality television with reality hits a little too close to home today.” Though we’re not killing people for sport on network television just yet, there are a lot of disturbing parallels you can draw from the ideas the film is grasping at between blood-lettings and the current state of our society. We’ve become increasingly desensitized to violence and carnage on our television screens. We live in a world where a branch of our government and a cable network work in lockstep to spread propaganda. The limits of what we find acceptable as a society seem to be stretching and doing more rapidly than ever before.

All of which is to ask the question, so when ARE we going to get to the point where we actually have a TV show that resembles The Running Man?

First of all, here’s a sentence I didn’t expect to ever write. We can thank 9/11 for stopping what would have been our first step towards a real-life Running Man. Inasmuch as you can “thank” 9/11 for anything, that is.

Back in 2000, Ben Affleck and Matt Damon pitched the idea for a reality TV show called The Runner. The idea was for a contestant to start on one side of the United States and have to find a way to make it to the other side without being caught by, well, everyone in America. If the “runner” made it all the way without getting captured, they’d win a boatload of money. If a viewer happened to catch them beforehand, they’d win cash prizes as well. While there were no promises or murder or bloody fights, the basic premise was arguably a G-rated version of The Running Man.

After 9/11, ABC pulled the plug on the series before it began. One executive told the New York Times, “Would people want to watch someone trying to escape capture after what this country has been through?” It took one of the worst national tragedies in American history in order to give us the perspective needed to know that a manhunt-for-sport might not be the best idea for a TV show, especially if all the in-show assignments within it were geared toward product-placement advertising.

However, as we’ve learned the 16 years since, perspective wanes. Affleck and Damon didn’t want to let go of the idea for their show and eventually found a new potential partner in Yahoo! in 2006. The show went back into development, but again failed to manifest. Finally, in 2016, the premise finally came to pass. Not on network TV or pay cable or even on Netflix or Amazon. The first season of The Runner played out on Verizon’s free, ad-supported video platform go90.

Run in part by a former U.S. Navy Seal, the premise remained much the same to the original one. Runners attempted to make it across the U.S. in 30 days without getting caught. Chasers did what their name implies. Viewers earned money by helping the chasers, not to mention getting the chance to win $50,000 at the season’s conclusion. Along the way, contestants drove Fords and wore Under Armour gear.

It’s not clear how successful the show was, though the Twitter account seems fairly light on interaction. However, a second season was confirmed at the end of the first one, though it’s been over a year and it has yet to appear. Regardless, there certainly were enough people paying attention that some of them picked up sizable checks for their efforts helping to catch runners.

Meanwhile. the manhunter genre of reality TV shows eventually did make it to U.S. networks in 2017 with Hunted, a CBS reality series that sent nine teams of regular people off the grid to elude “highly skilled investigators using state-of-the-art tracking methods.” The show premiered with big rating numbers in its first episode, but audiences quickly bailed when the reality of the concept didn’t live up to the hype. Of the nine teams that set out to evade capture, only two made it the full 28 days without being discovered, winning $250,000 for their efforts.

What both shows seem to have demonstrated is that while there’s a desire by some programmers and audiences to see shows pitting the hunters against the hunted, we haven’t quite found a version that’s palatable to mainstream audiences just yet. Though neither of these shows managed to break through the zeitgeist, that doesn’t mean someone won’t come along to find a version that can, especially as we move further down that perspective ladder. Is there a version that inserts ideologies into the mix? Or perhaps one that pits social classes against one another? And if so, does that up the ante for audiences and bring with it an emotional context that doesn’t currently exist?

Which escape tactic are they most proud of? Lee and Hilmar reflect on their #Hunted victory: https://t.co/QQ18Lv7RN1 pic.twitter.com/h7tZ8fhCyY

Ultimately, it goes without saying that we are very, very far away from living in the world that exists in The Running Man, and therefore watching shows about convicts running for their lives from large men who shoot electricity out of their lycra suits. Whatever you think of the current state of things, we’re still not the society depicted in that film, prescient as it may have been on some basic premises.

Of course, we do keep testing the boundaries that do exist to see what we are, in fact, willing to consider entertainment. We’ve watched people eat all manner of gross things for money. We’ve married strangers off to one another for our own amusement. We’ve forced people to give birth in the woods unassisted by medicine for the sake of entertainment. We’ve even asked people to have sex in a box and then talk about it on TV.

In some cases, these ideas have been rating successes. In others, they fizzled out for good reason. But as TV changes and we change with it, the boundaries will continue to be tested. Sometimes, we’ll know it when we see it and sometimes, we won’t realize things have shifted until they already have. We shouldn’t expect to see an actual Running Man anytime soon (thank God). We’re not willing to go there. But don’t be surprised if we keep pushing in that general direction to see how far it is we are willing to go in the name of entertainment. People from 1987 would be surprised to see how far we’ve already come in 30 years. Imagine what we might think of TV audiences in 2047.

2 thoughts on “How soon before we actually create a TV show like The Running Man?”