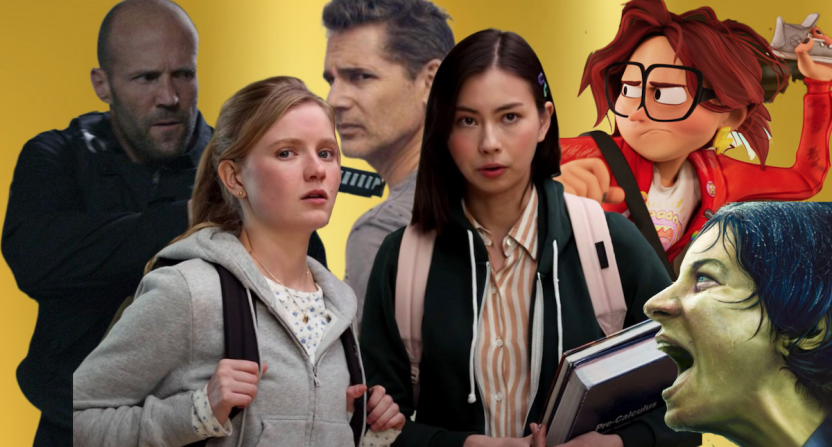 Quote: “Skating is the best thing that has happened to me.”

Skateboards are an endearing symbol of freedom. Young people are immediately drawn to them. Old people often view them as a nuance. So, when skateboards are introduced to a remote Indian village, you can see where the script is going.

Prerna (Rachel Saanchita Gupta) already has a rebellious spirit. The skateboard just makes that defiance more mobile. Her conservative father doesn’t like this at all and tries several ways to control her. But you can’t stop the power of teen spirit, especially when helped by outsiders. Even after the town passes an ordinance banning skateboards, a solution is found: building a skate park. Skater Girl captures the sheer joy of experiencing something new and discovering who you are. It’s told as the story of two women: Prerna, a child with a dream, and Jessica (Amy Maghera), the adult from London who helps a dream come true.

Quote: “You know very well that we’ve never been witches.”

It’s 1609 in Basque Country and it’s the time of the Spanish Inquisition. Also, a time of fear and faith. Six women are arrested and accused of practicing witchcraft. There’s no actual proof, just suspicions. However, in medieval times, that’s more than enough to get you into serious trouble.

Drawing inspiration from true historical events, this is more of a psychological thriller than strictly a period piece. The young ladies are captured, interrogated and tortured by Judge Rostegui (Alex Brendemühl) until they tell them what he wants to hear- that they’re indeed witches. In hopes of saving of everyone, Ana (Amaia Aberasturi) confesses. But she also piques Rostegui’s curiosity by agreeing to perform a ritual. She’s trying to buy time to form an escape plan before they’re put to death.

In Coven of Sisters, the women are on trial, but it’s the men who are guilty of evil.

8. Days of the Bagnold Summer

Quote: “I’m afraid you’re stuck with boring old me for six weeks, but we’ll have fun.”

So much for summer plans. An awkward British teen is supposed to visit his father and stepmother in Florida. But when his father cancels at the last minute, his consolation prize: spending that time at home with his single mom and the family dog. Groovy. This funny coming-of-age film is based on the graphic novel of the same name.

Daniel (Earl Cave, son of Nick Cave) dreams of being the singer for a heavy metal band, but struggles with confidence. He’s not the only one with self-doubts. His mother Sue (Monica Dolan) is earnest and well-meaning, but must navigate the usual challenges of being a working single divorced parent. She battles Daniel moodiness while trying to stay close to him. She’s also dating again, which Daniel doesn’t like.

Days of the Bagnold Summer has a lot of charm. Plus, it features the one of the most realistic portrayals of a mother-and-son relationship you’ll see.

Quote: “I have to tell you something and I don’t want you to freak out.”

Films can simultaneously be excellent and hard to watch. Violation is dark in ways not seen since The Nightingale. This Canadian movie premiered at the 2020 Toronto International Film Festival, but wasn’t available to the public until Shudder, the streaming service specializing in horror, acquired the rights and released it in March. And wow. Certainly worth the wait.

Violation begins with a couple who might be on the brink of divorce. Still, Miriam (Madeleine Sims-Fewer) and her husband go to visit her sister and her brother-in-law back in their hometown. Then one night, a drunken brief flirtation turns into something horrible. It’s one thing to be assaulted by a stranger, but it’s quite another when it’s someone you trust and love. This explicit tale of revenge captures some of the most brutal moments seen on film. Graphic and unsettling, Violation will stay with you for a long time.

Quote: “I want your liver. Your lungs. Your spleen.”

In the hands of a lesser director, Wrath of Man could have been a paint-by-numbers action movie filled with routine guns, explosions, and car chases. Thankfully, Guy Ritchie is a proven craftsman who knows how to tell a story with style. Paying attention to the little details pays off big. This dark revenge thriller (a remake of the 2004 French movie Cash Truck) reunites Ritchie with Jason Statham, who plays the dark and mysterious H.

When we first meet H, he is auditioning to be an armed car driver in Los Angeles. Because Statham has made a career out of playing tough guys, the audience immediately knows that H is way overqualified. What makes the film work is trying to find out exactly why he’s taking this job. As the story unfolds, his motives become clear, and we know this movie is going to have one hell of a violent ending.

5. The Mitchells vs. The Machines

Quote: “The Mitchells have always been weird and that’s what makes us great.”

Technology can be overwhelming. Sometimes it seems like human beings aren’t updating as quickly as the operating systems, apps or devices we rely upon. The Mitchells vs. The Machines, an animated family comedy, finds the funny in highlighting how technology that was supposed to bring us closer together might be tearing us apart.

The tech takeover theme has been explored in many movies, from 2001: A Space Odyssey to the Terminator films and Westworld. The Mitchells vs. The Machines puts a fresh spin on it. Daughter Katie (Abbi Jacobson) is leaving for college and her father Rick (Danny McBride) is struggling to connect with her. When the machines start taking over the world, this dysfunctional family fights together to survive. This is one of the best animated films in years. Listen out for Olivia Colman, who steals the movie as the AI known as PAL.

Quote: “When I was 16, all I cared about was smashing the patriarchy and burning it all down.”

You get the feeling that Moxie is the movie Amy Poehler always wanted to make for the daughter she never had (she has two sons). Poehler’s directorial debut is a comedy-drama love letter to feminism. There’s so much crap women deal with, and it often starts in high school.

In Moxie, 16-year-old Vivian (Hadley Robinson) is being raised by single mother Lisa (Poehler). Vivian is growing weary of some of her classmates, in particular bully and star athlete Mitchell (Patrick Schwarzenegger). While rifling through her mom’s old belongings, she becomes inspired to anonymously write her own zine called “Moxie.” Not a blog, but an actual old-school print publication. How quaint.

The feminist newsletter becomes an instant hit, rallying cry, and inspiration throughout the school. Moxie is about young women finding their voice in a male-dominated world that often fails to listen.

Quote: “When you’ve been lying about something for so long, it becomes second nature.”

The past has a way of haunting your present and future. No one knows that better than Aaron Falk (Eric Bana), an Australian federal police officer who finds himself connected to two murders decades apart. Falk returns to his drought-stricken rural hometown to attend a funeral following an apparent murder-suicide. It’s the same hometown that still harbors suspicions about him and his possible involvement in a crime that happened when he was a teenager.

The Dry isn’t a conventional whodunit. Instead, it’s a slow boil examining the toil that a crime takes on a man and a community. Old wounds never really heal. And Falk’s return pours more salt in it. This wonderful atmospheric film shows images of Australia that American audiences rarely see. The biggest revelation here is the captivating performance by Bana, who skillfully avoids most clichés you associate with cops. He plays Falk as someone who seems utterly lost.

Quote: “You look like Gwyneth Paltrow on food stamps- and not in a good way.”

Funerals are, of course, sad. But like many gatherings, they can also be uncomfortable. It’s one thing to reluctantly be pleasant to people you don’t particularly care for. It’s quite another to unexpectedly bump into someone from your secret life. Awkward.

Shiva Baby is a comedy of unfortunate circumstances, as NYU student Danielle (Rachel Sennott) shockingly runs into her sugar daddy Max (Danny Deferrari) following a funeral (In Judaism, after the burial, mourners gather at a home to “sit shiva.”). If that’s not tough enough, Max is there with his wife and baby. And if that still isn’t stressful enough, Danielle must deal with prying, judgmental relatives, as well as her peeved ex-girlfriend Maya (Molly Gordon- you might remember her from Booksmart).

Conflict makes for funny moments and there are plenty. In a tight 77 minutes, we watch Danielle squirm, pine, get jealous, and feel desperate. How is she going to get out of this mess?

Quote: “They had every advantage, and yet they still cheated.”

When the college admissions scandal broke in 2019, much of the focus was on the celebrities who were indicted by the federal government: actresses Lori Loughlin and Felicity Huffman. That was juicy tabloid fodder: famous, rich parents paying bribes to get their children admitted to elite schools like Stanford, Southern California, Yale, and Georgetown.

Here’s a different approach, focusing on the system that allowed mastermind Rick Singer to flourish. He perfected the “side door” strategy which guaranteed admission, for a price. The scheme included proctors changing test results, phony credentials, and doctored pictures to make non-athletic students appear to be accomplished athletes.

Singer made millions while the schools were portrayed as victims. However, it’s fair to ask: did the entire admissions system enable Singer? Netflix’s documentary, which includes reenactments with Singer portrayed by Matthew Modine, takes a closer look at a flawed process. Makes you wonder if there are more Singers out there.