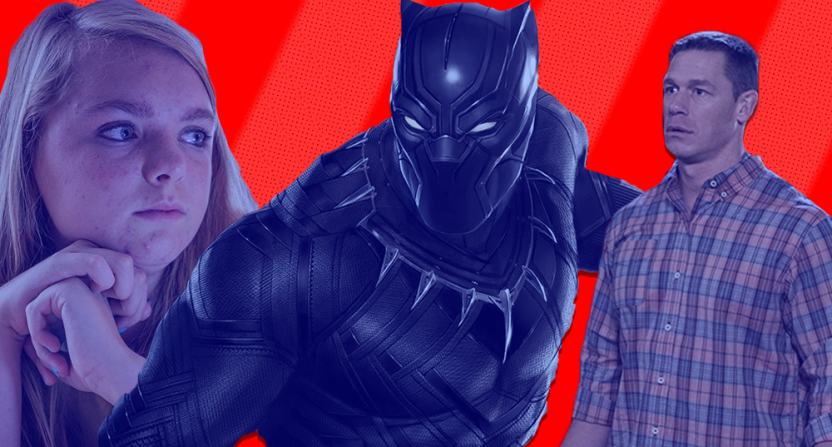 2018 was quite the year and that’s true in the world of movies, too. With less than two weeks left, 2018 box office revenue is on pace for a record domestic gross of $12 billion. On the artistic side, there were some great films and some awful ones. We saw the rise and decline of MoviePass and learned that no one wants to host the Oscars.

After 101 movies (still waiting on Vice and If Beale Street Could Talk), here’s all you need to know about the best, worst and WTF movie moments of 2018.

10. BlacKkKlansman – Spike Lee reminds us why he’s one of America’s greatest directors. This is his best work since the criminally underrated 25th Hour. This movie is based on the true story of an African-American cop who infiltrates the Ku Klux Klan. Lee, who often collaborated with Denzel Washington, directs Washington’s son, John David Washington, as the undercover cop who navigates covert and overt racism while doing his job. BlacKkKlansman is particularly poignant considering the today’s highly polarized climate.

9. The Wife –How would you feel if your significant other basked in the glow of unearned glory? Would you quietly support them? Would you be resentful? The magnificent Glenn Close portrays the wife of an author who has just received the Nobel Prize for literature. The long, married couple has an unusual but successful partnership. The husband is, of course, is completely fine receiving all the accolades. The wife, however, has reached her wit’s end, growing weary of his fraud and philandering.

8. You Were Never Really Here –The thinking man’s action film. Armed only with a ball-peen hammer, Joe (Joaquin Phoenix) ventures into the seedy underbelly of society. He rescues victims of the underage sex trade by dispensing his own form of brutal justice. This killer-for-hire is skillful and efficient. He’s also troubled and suicidal. When a job goes wrong, that might be enough to push him over the edge. With sparse dialogue, You Were Never Really Here still builds tension and fear. Joe has survived this long, but how much can even the toughest tough guy take?

7. Where Is Kyra? – Desperation is often at the root of crime. We would all like to think we would never be tempted to commit a felony. But under the right circumstances, anyone is capable. Desperation makes people do all sorts of things. Kyra isn’t a bad person. But she’s unemployed, poor, her mother just died and there’s a chance she could be evicted from her New York City home. Her crime is victimless, but it is a crime. She does what he must do to survive. What’s the harm? Where Is Kyra? is a commentary on aging and poverty and what it can do to a person.

6. Game Night – One of the most pleasant surprises of the year. This movie could have been basic, but Game Night goes the extra mile because it’s also a David Fincher spoof. Inspired, hilarious and keeps you guessing. Max (Jason Bateman) and Annie (Rachel McAdams) played a married couple who are ultracompetitive game-playing enthusiasts (charades, trivia, etc.). When Bateman’s older brother and more successful brother Brooks (Kyle Chandler) shows up that leads to a game night experience no one will forget. McAdams gives a terrific comic performance. Watching her playful dance to “Semi-Charmed Life” by Third Eye Blind while holding a real gun that she thinks is fake is gloriously funny.

5. The Rider – Under the best of circumstances, being a rodeo rider seems to be a tough life. But it’s a life that Brady loves. He’s good at it. So, when he sustains a career-threatening injury, it’s difficult for him to accept. He could just ignore the doctors and continue like a football player dismissing the dangers of concussions. However, Brady has a constant reminder of what could happen. He visits his friend Lane whose own injury while riding has left him paralyzed and unable to speak. Still, the temptation to return is great. When your entire life is defined by what you do for a living, walking away from that isn’t easy. The Rider is a gorgeous film that feels like a documentary.

4. The Zen Diaries of Garry Shandling – A lot of attention was paid to the Robin Williams’s documentary Robin Williams: Come Inside My Mind. This one is better. It is one of the most thorough examinations on a comedian ever made. Garry Shandling was a pioneer, creating two shows (It’s Garry Shandling’s Show and The Larry Sanders Show) which were ahead of their time. His influence is seen in many modern comedies we enjoy today. Shandling was unconventional, groundbreaking and damned funny. A comic’s comic. He also was tortured, plagued by self-doubt and depression. He had complicated relationships with loved ones. He also never really got over the childhood death of his brother.

3. Tully – Most films tend to glorify and sanitize motherhood. This is not one of those films. It’s the best -and possibly only movie – about postpartum depression. Raising a baby is hard work and presents all sorts of challenges. However, our society doesn’t talk about these issues enough: the stress, the fatigue and the loss of your identity before kids. Often mothers aren’t allowed to complain. They simply smile and bear it. If you’ve had children, there is a lot in Tully you can relate to. If you don’t, there is a lot you will find illuminating. There has been some criticism of Tully but overall it has real value.

2. Eighth Grade –Kids aren’t all that different from generations past. They suffer from the same anxieties, insecurities, and peer pressure. What has changed is the impact of technology and how it plays a role in growing up. Kayla (Elsie Fisher) is your typical teen in her final year before high school. She yearns to be popular and has a secret crush on a boy. She is very active on social media, posting videos on her YouTube channel about developing self-confidence even though Kayla totally lacks self-confidence. Eighth Grade is about the awkwardness we all felt. Kayla desperately wants to fit in. She eventually realizes that she doesn’t need the approval of the cool kids to be cool.

1. Black Panther – The most Afro-centric movie ever made was the best movie of the year. It stars primarily black actors and is directed by an African-American and became one of the highest-grossing films of all time. Black Panther raised the bar on what a comic book movie could be. It will likely be the first in that category to receive a Best Picture nomination. Black Panther explores a lot of areas specific to the black experience. The characters are powerful and smartly written. The people of Wakanda are inventors, liberators, and philosophers who are always looking to better themselves. If you’re tired of Hollywood framing the black experience with stereotypes, this is the film you’ve been waiting for.

Ethan Hawke has been nominated for an Oscar four times–twice as an actor, twice as a screenwriter. His work in First Reformed as a troubled small-town priest is so nuanced that it deserves an Academy Award.

Glenn Close is the Buffalo Bills of movie stars. No actor or actress has been nominated more times (six!) without winning an Academy Award. She won’t be denied again, will she?

A great comic book movie needs a great villain. Michael B. Jordan gives us the best one we’ve seen since Heath Ledger’s Joker in The Dark Knight. Erik Killmonger is a complex, wounded, and tragic figure.

Imagine you’re the wife of an astronaut on the riskiest endeavor mankind has ever undertaken. You’d be pretty stressed out. Claire Foy brings uncommon energy to the role of Janet, Neil Armstrong’s wife.

The 15-year-old must do a lot of heavy lifting since she’s in almost every scene. If she gets nominated for Best Actress, she would be the third-youngest ever.

For Ryan Coogler to put it all together and make a movie that was an artistic, cultural, and financial success is a laudable achievement.

Best Original Song: “All the Stars” by Kendrick Lamar and SZA

A masterpiece with an irresistible hook. This isn’t just the best song in a movie. It’s the best song of 2018. Plus, what a killer video.

The disturbing and unbelievable true story of triplets separated at birth. There’s never been a documentary like this.

Best, worst, most and WTF moments

J–Law is an Oscar winner. She’s cool. But that Russian accent. #ugh

Really wanted to like and support this movie as it aimed to be a female version of Superbad. But it falls woefully short. The kids are fine but the adults are so bad that it undermines the entire film. Blame the script or the actors?

Even Ron Howard couldn’t save this turkey. The Star Wars film no one asked for was so disappointing that it reportedly has put other spinoffs on hold. This scene below is terrible.

Can’t explain it without spoiling the joke.

So powerful, so sad. It might be enough to get Toni Collette an Oscar nomination.

Most Entertaining Movie: Ant-Man and the Wasp

For sheer entertainment, it’s hard to beat. A terrific blend of humor and thrills.

The plot is a little muddled, the Scooby Doo masks really must go but this has some of the best action sequences ever put to film.

Best Performance in a Snoozer You Probably Didn’t See: Bill Nighy, The Bookshop

If you can stay awake, check out the always terrific Bill Nighy.

Why did Thor cut his hair? Why is there a talking raccoon? Why are Doctor Strange and Iron Man constantly bickering? Why is Bruce Banner in an Iron Man suit? Help!!!

Witches running a dance studio! An awesome premise for a movie, right? This remake of a 1977 film is too long and too weird. However, there are genuine moments of sheer terror, especially a key dance scene that you’ll know when you see it.

My eyes cannot unsee this. Now yours can’t either.