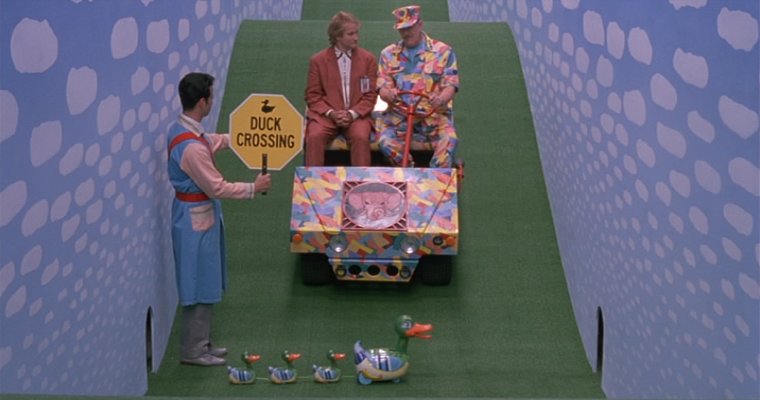 My grandparents have suffered through some truly terrible movie experiences, many of which were my fault.

Visiting them in their retirement village in Boynton Beach, Florida for weeks at a time, there were only so many days you could spend lounging at the pool, schooling your cousins in shuffleboard, or getting schooled at the billiards table by your grandfather. Eventually, because everyone needed some quiet time, you either went to the movies or brought movies home. As the grandchild, it was usually my choice when it came to picking the film and in retrospect, it was a position in which I was terrible at.

I remember dragging my poor grandparents to the movie theater because I was very excited about the potential of Robert Townsend’s superhero comedy The Meteor Man. It did not live up to said potential. Another time I took my grandmother to see Wayne’s World 2, secure in the knowledge that it would live up to the original. It did not.

These were the early and mid-90s so if we wanted to rent a movie, that meant trips to Blockbuster. I distinctly remember making one of those video store trips with a clear intention based on a theory. I bypassed the new release section and went straight for the 1992 Barry Levinson comedy Toys. My theory was predicated on the fact that my Jewish grandparents, whose humor and comedic sensibilities were honed by Ernie Kovacs, Mel Brooks, Carl Reiner, and Sid Caeser, would find a lot to like in this Robin Williams vehicle.

Specifically, I remembered a scene in the movie where Williams is wearing a literal smoking jacket and, after entering a room with plumes of smoke around him, declares, “I’m in the mood for smoked chicken, how ’bout you?” If my theory held, my grandparents would be rolling on the floor in hysterics at this whimsical fantasy I had bestowed upon them.

It didn’t take long in the movie for the scene to appear and I remember having a giddy sense of anticipation. Their laughter at what I had presented to them would be the bond that connected us across generations. “See, I understand classic comedy! And now you know that we share this ancestral bond.”

Williams entered the room and uttered his zinger and just like Michael Gambon in the film, their reaction was… nothing. No laughter. No guffaws. Not even courtesy snort. Dead silence.

In that moment, I came to three stark conclusions. Number one, I had chosen poorly once again. Number two, I had subjected my grandparents to yet another terrible film, cementing my status as the grandchild who cannot be trusted when it comes to cinematic choices. Number three, I apparently didn’t understand good comedy when I saw it.

Toys is one of those movies that begs the question “How did this get made?” so clearly that it’s a minor miracle it took so long for the How Did This Get Made podcast to lambast it. When it was released in the U.S. 25 years ago on December 18, 1992, it came preloaded with all of the pedigrees of the era that signaled a surefire hit.

Robin Williams had become an A-list Hollywood actor thanks to recent films such as Good Morning Vietnam, Dead Poets Society, and Aladdin. Director Barry Levinson was basically working with a blank check after box office and Oscar success with Rain Man and Bugsy. The cast was rounded out with great actors such as Michael Gambon, Joan Cusack, and Robin Wright. LL Cool J is prominently involved and The Kids loved them some LL Cool J in 1992. On paper, this should have been a no-brainer.

So strong was Williams’ stock at the time that the teaser trailer for Toys was literally just him standing in a field cracking jokes. Williams explains that he’s here to promote Toys, but it’s really just 90 seconds of him doing the kind of bits you’d come to expect from the comic, for better or worse. Some of those bits have not aged particularly well, as you’ve probably also come to expect.

Still, the kind of meta-commentary style of the teaser seemed so unique and so unlike any kind of movie trailer at the time, it was hard not to take notice and wonder what exactly Toys was going to be about. Turns out, this teaser trailer of Robin Williams riffing on whatever took his fancy was more of a literal synopsis than we realized.

If you’ve never seen the film, and I can’t imagine there are too many reasons to slog through it in 2017, it concerns the fate of Zevo Toys, whose enigmatic owner, Kenneth Zevo, is near death. Instead of leaving the factory to his man-child son Leslie (Williams), he decides to let his brother Leland (Gambon) take over. A lieutenant general in the U.S. Army, Leland is interested in starting a line of war toys, which goes against the ethos of the company and is cause for concern for Leslie and his woman-child sister Alsatia (Cusack).

Meanwhile, in a secondary plot that is in no way disturbing, Kenneth hires Gwen (Wright) to work in the factory with the implicit hope that she and Leslie would start dating, which would help him to mature.

Jurassic Park wouldn’t come out for another two years, but it’s hard not to think of two infamous lines from that film when describing Toys. The first comes from John Hammond, who reiterates over and over that he “spared no expense” in his creation, which feels like a notion running beneath this film as well. Many of the visuals and sets, designed by Ferdinando Scarfiotti are gorgeous. Much of the costume design and set design is inspired by the works of René Magritte (you know his work from The Son of Man) and influenced in part by Italian Futurism, giving it a distinct style. All the money they put into creating that is on the screen.

The second quote from Jurassic Park that fits here, perhaps even more so, was when Ian Malcolm told Hammond that “your scientists were so preoccupied with whether or not they could that they didn’t stop to think if they should.” It’s hard to come away from a viewing of Toys and not wonder what the point was supposed to be. All of the pieces made sense separately but when they all come together, it fell completely apart.

Perhaps that “blank check” mentality which allowed Levinson to make this film is the same reason it flopped so hard. This is capital R, capital W, capital P, Robin Williams Performance and that’s not as good a thing as a lot of people thought it would be. It almost seems like Levinson just let Williams do whatever he wanted and they filled in the plot around his rants and bits. Instead of trying to find the right tone to fit the plot, the film veers tone wildly in order to meet Williams wherever he wants to be in that moment.

But there’s also plenty of blame to go around elsewhere. There’s a fine line between whimsy and wanking, and the film veers toward the latter often. So much of the wackiness here fails to elicit any kind of reaction, let alone the intended one, creating a strange vacuum of humor in a film that was surely intended to be a rollicking good time. You can say that the film is trying, and it is, but it’s also trying way too hard. One infamous scene has Williams and Cusack recreating MTV’s visuals in a scene that was clearly created by someone who had never actually watched MTV.

If there is something to be said for Toys, it’s that the plot was slightly ahead of its time. Leland’s goal of turning the company into a war games profiteer sees them veering into the world of VR shooters and shooting drones. That’s actually not that far off from the future ahead where video games certainly skew towards violent means.

Toys isn’t too interested in delving into what’s going on beneath the surface with America’s fascination with violent indoctrination, however. It would rather use that time allowing Williams to give a pep talk to a collection of cute toys. What could have been an interesting discussion about whether or not the toys of the previous generation still held value against the toys of the future gets lost in the shuffle.

All of the parties involved in Toys would go on to acquit themselves just fine in the years that followed. Levinson got his groove back with Sleepers and Wag the Dog. Williams was an unending presence in the 90s, showing up in classics such as Mrs. Doubtfire, The Birdcage, and Good Will Hunting. Cusack and Wright both carved out strong careers over time, the former earning her second Academy Award nomination while the latter picked up a Golden Globe win. Gambon’s stellar career is capped by his portrayal of the beloved Dumbledore in the Harry Potter films. And LL Cool J survived super sharks.

I’ve since come to agree with my grandparents that Toys is not a very funny, or good, film. And when it comes to finding great comedy to share with others, I’d like to think I’ve gotten better about it (though I think I should give Meteor Man one more shot). Perhaps had some of the parts been changed out, Toys could have been more fun. Then again, I suppose that could be said of a lot of toys.