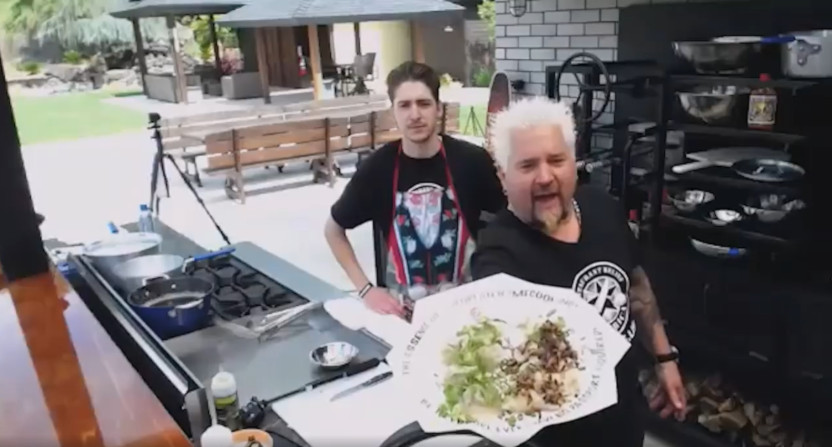 I used to watch Guy Fieri’s Diners, Drive-In, & Dives (commonly referred to as “DDD” or “Triple D”) when it first aired and was a bit of a phenomenon. The show has now been going strong for 13 years, which hardly seems possible. (Wasn’t 2007 yesterday? Time is wild!) It was largely understood that this “Simpson character” of a celebrity chef featured amazing local joints all across America, but that he should not be taken seriously. How could you take someone who slathered “donkey sauce” all over his dishes be treated with any deference? But until recently, I hadn’t really thought about Fieri’s show in several years, except from internet memes and jokes where he was the butt.

Despite those who thought what Guy was selling was subpar and mock-worthy, word trickled out about what a genuinely good guy Guy was. A friend covered him in 2013 at the Pebble Beach Food & Wine Festival and came away having a truly wonderful experience.   I tucked that and other stories of how kind-hearted he was into the back of my mind anytime anyone would malign him. And I’m sure I wasn’t perfect. I’m sure a younger, snarkier version of me took shots at him too. I mean, I get it, there’s a lot there to poke fun at. Spiky bleached tips reminiscent of 90’s boy bands and an Ed Hardy aesthetic a decade too late make an easy punching bag. But it’s time to strip off the veneer and pay attention to what’s underneath.

And now the winds are shifting in his favor. Fieri has single-handedly done more for restaurant employees than the federal government. His Restaurant Emergency Relief Fund is giving grants to unemployed restaurant staff, and raising money through events like Fieri’s Nacho Showdown with Bill Murray (judged by Shaq and Terry Crews). He is cooking meals for healthcare workers and first responders and quietly doing the work in just the way world-renowned chef José Andrés is, without the cachet of being one of the foremost gourmet chefs in the world.

Though, let’s be clear: Guy has his own bona fides. If you watch his show and see him interact in a kitchen, it’s clear he knows what he’s talking about. UNLV is not Le Cordon Bleu, but it’s almost perfect that Guy would go to the well-reputed but hard-partying cousin of the uptight, stuffy cooking schools. He’s your quirky, not too serious but still smart state school cousin in a world that thinks pain and snobbery are the only way to really appreciate food. (It’s not.)

I like to think I’m ahead of the curve in the regard that I came to the reruns of DDD a few weeks before everyone understood how great Guy was, bolstered by being featured on John Krasinski’s Some Good News. But really, I’m not exceptional. We have A LOT of time to sit around right now and sometimes binging shows isn’t what I need. I need background noise. I need something not stressful and fun and easy to absorb while paying 15% attention. I need something pure and wholesome and positive with no stakes. My Twitter friend Katie Dzwierzynski mentioned she was several hours deep on a watch of DDD reruns, so I figured out where Food Network was on my cable, a channel I don’t think I’ve engaged with much since Sarah Moulton was replaced by Iron Chef, and flipped over there and…y’all…it is such a BALM in these troubled times.

Here’s the thing about DDD & Guy: he has such reverence and respect for what people all over America are doing at hometown eateries. He truly, truly loves the food he features. If you watch enough DDD, you start to discern the difference between his “well executed, chef” and his much more enthusiastic “bomb-dot-com”, but regardless of whether he has over the top enthusiasm or a more muted reaction, he adores what he does. And that adoration will make you feel warm and fuzzy. And hungry. And is keeping these locally owned restaurants in business.

As much as we want to be Parts Unknown people, many of us are not eating exotic foods in exotic locales now, or really, let’s be honest, ever. Guy is featuring the kinds of places we actually eat at, as average Americans. The hidden really good, really solid joints in towns like Bakersfield or El Paso or Columbus. And he also hits up big cities and features the kind of spots you meet your friends at, not the Michelin star restaurants. And, honestly, he makes himself less of the story than some shows. He’s not the star. He’s the conduit by which other people are allowed to shine.

It’s not just burgers and greasy food joints that Guy features either. Or abominable frankenfoods that are novelties, though there are those. In the aforementioned El Paso stop, he featured a vegan Mexican food truck. He featured an ox neck dish at Ducks Eatery in New York City that had me drooling. He goes to Hawaii and tells you about a French chef serving delicious dishes at reasonable prices next to the fish market.

Another thing I love so much from my rewatches of Diners, Drive-Ins, and Dives: there’s no room for cynicism or snark or being better than in this universe. These are hard-working people doing amazing work, from Mexican in Minneapolis to Middle Eastern in Texas, and Guy is genuinely appreciative of it. And as I’ve gotten older and softer, I’ve just come to appreciate that more. No one is ever torn down here. It is beautiful and the work these people are doing is beautiful and you walk away with more of an appreciation than ever for what people, literally, bring to your table.

In Guy’s format, he tells you a bit about the restaurant, interviews some patrons (who are fans and friends of the proprietor’s), and then has the chef make a signature dish. Some of my heroes have always been cooks because remembering and doing all that they do in a hot kitchen and doing it well has always made my soft indoor person brain marvel. As they do the cooking demo, you’ll gain the same appreciation. The amount of effort that goes into scratch made mole or even biscuits is astounding and though you could replicate it at home, why would you? Both the economies of scale and passion chefs bring to everything from burgers to bahn mi in strip malls and shacks across this great country (and Canada) are awe-inspiring.

And now, Guy is taking his DDD action to his own backyard. Since a vast majority of us can’t go to restaurants still, and even if we can, that’s a vastly different experience than it was even three months ago, Guy has brought the restaurants to him with Takeout episodes. Past alumni of DDD mail Guy the ingredients for one of their favorite dishes, and while the three or four featured chefs featured are on a video conference with Guy, he, with the help of his sons, recreates the dish in an outdoor kitchen that is nicer than any indoor kitchen I’ve ever cooked in. It’s so damn comforting. He checks in with each chef and sees how they’re doing and how they’re adapting. And these humble heroes are truly on the frontlines and tell Guy how they’re supporting their communities and staff. It just…gives me feelings, dammit.

It is also very funny. As noted above, Guy knows what he’s doing in the kitchen, and the chefs sending him boxes of stuff to cook aren’t doing the average takeaway order for Guy. Chef Rino from Rino’s Place in Boston sent a wildly unnecessary pan, eliciting laughs from all in attendance, and sheets of pasta, pasta dough, and ingredients to make your own pasta dough, just in case. The owner of Catelli’s of Healdsburg, not far from where Guy lives in Windsor, drove down her ingredients instead of mailing them and was running a bit late, creating some in-show hijinx.

My favorite was the ahi katsu from Fresh Catch in Oahu, where the chef mailed the beautiful ahi and the finished product had me about to drive up to Guy’s, about twenty minutes from my own house, jump the fence and try to steal some. I, fortunately, realized sitting on my couch at 11 at night that the show was not live and the ahi katsu was probably put away. Also catching a B&E charge in the middle of a pandemic probably wasn’t worth it.

That’s what Guy does by featuring amazing places right now, from his own above-average backyard: keeps us hungry and keeps us wanting to support the local places that we can, as the dishes to be washed at our own homes seem to never abate. And those featured dishes and chefs give us hope. Not that things will be what they were, because they won’t, but that whatever the future brings will be okay and the people that work so hard to be there for us by making sure we have delicious things to eat will still be doing that. And more than just giving us hope, Guy is making that happen through his monumental efforts to support the restaurant staff that bring that to fruition.

You can catch a marathon of Diners, Drive-In, and Dives Friday and Saturday on the Food Network, including Takeout episodes.