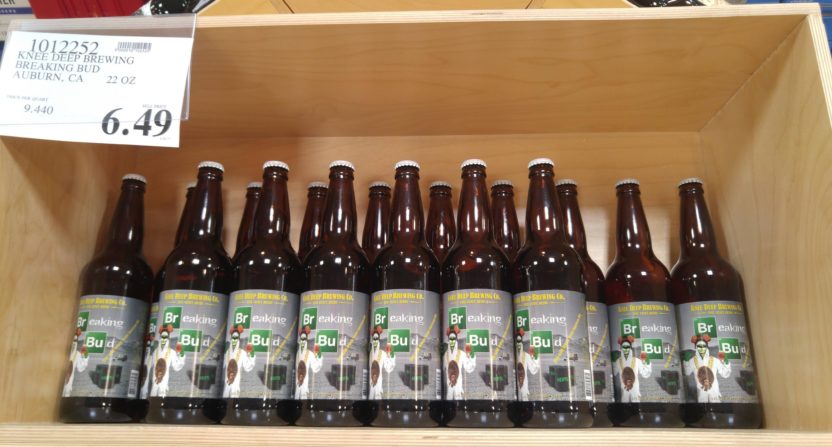 These are tricky times for craft breweries. The days when your story might have been unique but now everyone and their mother runs a local craft brewery with a line of beverages with wacky names. There’s also a decent chance that the glory days are already on their way out and your effect on a neighborhood’s revitalization isn’t quite what you’re hoping it will be.

So in the words of Breaking Bad’s Walter White, maybe your best course would be to tread lightly when it comes to creating unnecessary problems for yourself.

For example, take the hot mess that Auburn, California’s Knee Deep Brewing seems to have stepped in with their Breaking Bad-themed beer. Per The Hollywood Reporter, the studio behind the hit TV show are suing the brewer over their Breaking Bud IPA.

“Simply put, rather than investing the time, effort and resources necessary to establish their own reputation and identity, Defendants have instead opted to hijack the famous brand identity associated with SPT and its BREAKING BAD show for Defendants’ own intended benefit,” writes attorney Jean-Paul Jassy in the complaint. “Defendants’ unauthorized use of SPT’s trademarks and design elements threatens to erode the value of SPT’s BREAKING BAD Marks by undermining SPT’s continuing ability to attract licensees for such marks and secure compensation for the right to associate one’s products with the BREAKING BAD show.”

One look at the beer in question and it’s clear to understand why Sony is so pissed. At first glance, you’d probably just assume that Knee Deep had officially licensed the Breaking Bad logo and just tweaked it for their name. The addition of their mascot in what clearly looks like the meth-making suit that Walter wore in the lab solidifies the not-so-subtle infringement.

It’s interesting that the suit was even filed in the first place as these kinds of issues usually get resolved with a sternly worded letter or phone call. As The Takeout surmises, it sounds like Sony tried that and Knee Deep decided to call their bluff, which was not actually a bluff.

It’s also not the first time Sony has gotten all legal about defending their Breaking Bad copyrights. Albuquerque company Great Face and Body marketed “Bathing Bad” bath salts until they were served with a cease and desist.

The weirdest part of all this is that it would have been pretty easy for Knee Deep to create a beer label “influenced” by Breaking Bad without making it an implicit logo ripoff. Pipeworks’ Hey Careful Man There’s A Beverage Here white Russian imperial stout and Stillwater’s Hopvine Bling Berliner weisse are two great examples of beers that are obviously referencing specific pop culture entities (The Big Lebowski and Hotline Bling, respectively) but can also claim to be distinct enough that lawyers won’t get involved.

For their part, Knee Deep has responded on their Instagram feed.

From our CEO, regarding our friends at Sony: I was surprised by the unexpected lawsuit filed against us by Sony yesterday, especially after they originally contacted us many years ago touting their appreciation of our Breaking Bud beer that made gentle fun of their show. Shortly after Breaking Bud was introduced, in early 2015, I actually received an email from a Sony representative that said, “It seems the Knee Deep team are big fans of Breaking Bad and we really appreciate the call out to our very popular show.” Soon thereafter I spoke with the Sony representative and we discussed the potential benefits of a formal partnership between Knee Deep and Sony but we ultimately decided not to pursue such a partnership because, among other things, our label has always been meant as a joke and not something seriously connected to the show. At no point, during those discussions, did Sony ever threaten to sue Knee Deep over the name of the beer. I’ve always been under the impression that Sony had no issue with our Breaking Bud beer since, after all, the Sony rep is the one who told me he “appreciate(ed) the call out to our very popular show” which is hardly what one would expect from someone who thinks they can sue you for the “call out” if you don’t pay them a licensing fee, which is what I gather they now want from us. Breaking Bud is one of our more successful beers, and I think our customers appreciate that the quirky label is a joke. No one has ever thought the joke meant we were endorsed by Breaking Bad. We are a small brewery and I don’t appreciate the distraction, not to mention the expense of having to deal with something that should have been addressed 3 years ago if Sony really had an issue with it. At the end of the day, the quality of the beer is what has made Breaking Bud popular and we should all be able to take a joke.

It sounds like they’re misunderstanding the issue by assuming Sony has a problem with the “joke” and not with the whole “using copyrighted trademarks to make money without giving it to the people who own the trademark” thing. They’ll probably want to get a lawyer of their own to help figure that out.