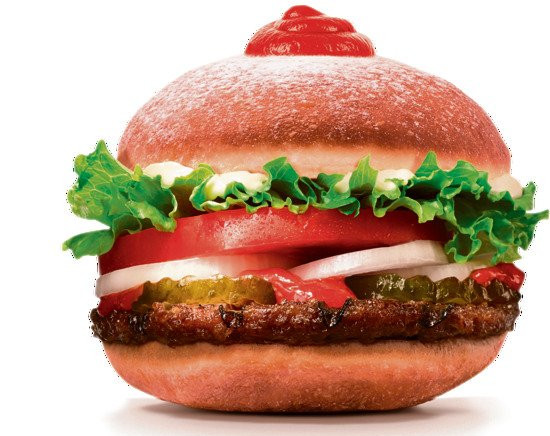 Disclaimer: apologizes for any nausea this article may induce.

Well it’s the holiday season again which means lots of people will be drinking egg nog, building and eating ginger bread houses, and feasting on Christmas ham. Jews, meanwhile, will celebrate Hanukkah with jelly filled donuts known as sufganiyah. However, some Jews and non-Jews in Israel will be treated to a special donut filled with a different jelly like substance.

Burger King in Israel is taking the jelly filled donut to a whole new level. Not only are they placing filled donuts on their hamburgers, but they are going to fill them with… KETCHUP.

The odd combination puts together the sufganiyah and the famous Burger King Whopper. It’s a special burger that patrons can purchase at their local Burger King in Israel this month.

“This matching of two popular Israeli food items was inevitable for us. We’re proud to be able to end 2016 on a creative, festive note,” Israeli Burger King CEO Steve Ben Shimol told Ynet.

While this may seem gross, Burger King is just following in everyone else’s footsteps. Boston has the Boston creme donut and sometimes dumplings have interesting things inside them. So it’s not like Burger King in Israel is the first to create such an odd bread filled item.

Not going to lie, the idea of donuts as buns for a hamburger sounds good and it’s also been done before. The Yarmouth-Dennis Red Sox of the Cape Cod Baseball League sell them at all of their home games every summer.

Meanwhile, the Arizona Diamondbacks created a sweet hot dog that basically combines every sugary treat into one faux hot dog.

New to Chase Field this year: the Churro Dog. pic.twitter.com/drUK3rITxX

But then again, all of these items are pretty much normal and have been done before. Excuse me if I’m wrong, but has anyone ever filled a donut with ketchup before? That’s probably just taking this whole craze a little too far. Then again, people would just be putting the ketchup on the burger itself so I guess it’s not out of this world.

Anyway if you happen to be reading this article in Israel and try one of these burgers, please report back to us.