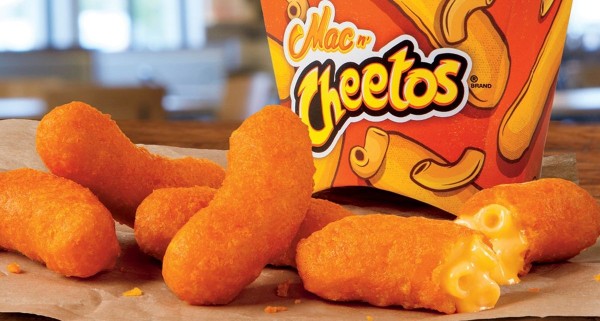 It looks as though Burger King went down the snack aisle for their latest addition to their menu, as the fast-food chain is set to unveil what they’re calling Mac ‘n Cheetos.

Based upon the popular Cheetos snack brand, this latest menu item consists of macaroni and cheese bites breaded in Cheetos and deep fried. That sound you hear is cardiologists across the country picking their jaws off the floor.

The new product, called Mac ‘n Cheetos, emerged from a partnership with PepsiCo Inc.’s Frito-Lay, the snack empire that owns Cheetos, Doritos, Ruffles and other chips. The move mimics the strategy of Yum! Brands Inc.’s Taco Bell, which introduced a taco with a Doritos shell in 2012. That item, called Doritos Locos Tacos, helped turn around sales at the then-struggling chain and offshoots followed: Cool Ranch, Nacho Cheese  and Fiery Doritos.

Mac ’n Cheetos will be sold for about eight weeks or until supplies run out, said Burger King, which is part of Restaurant Brands International Inc. The $2.49 five-pack of portable macaroni-and-cheese bites are similar to mozzarella sticks. The item, which has 310 calories, has already appeared at some Burger King restaurants in a trial phase.

“We’re partnering up with one of Americans’ favorite brands,” Alex Macedo, president of North America at Burger King, said in an interview. “It’s quite unique.”

Burger King, which has been trying to serve a more creative menu in light of increasing competition in the fast food market, has certainly been very active in trying to gain ground over the past few months. Recent additions to their menus also included hot dogs, egg burritos, the Whopperito, and Chicken Fries Rings.

Out of all of their additions, Mac ‘n Cheetos is no doubt the outlier when compared to the other menu items. Only time will tell to see if their cheesiest of options will catch on to the general public.