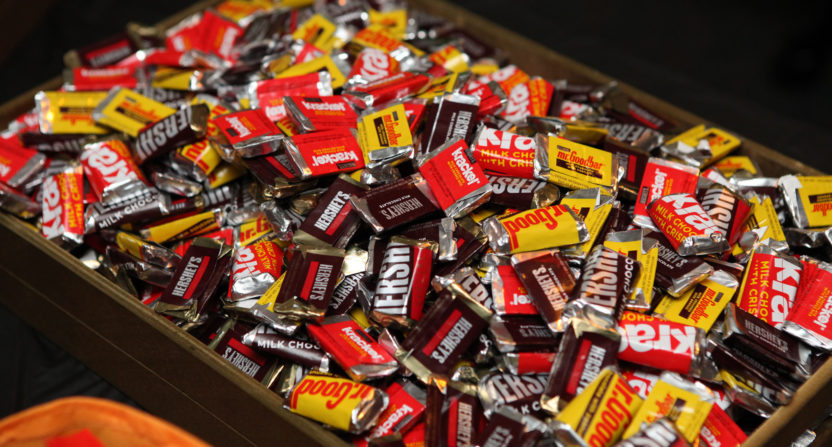 According to the packaging for Hershey’s Miniatures, an assortment of miniature-sized Hershey candy bars most commonly found in your grandparents’ or office receptionist’s candy dish, the four options included offer “a little something for everyone.”

This works on multiple levels. First, they are literally little somethings. Second, everyone seems to have their own rankings when it comes to which minis they eat first, which flavors they save for last, and which flavor gets left behind to occupy the candy dish like some kind of coup d’etat of dissatisfaction. Most people, however, are wrong.

You can probably picture the four options found in every bag of Hershey’s Miniatures. Krackel, Mr. Goodbar, Hershey’s Milk Chocolate, and Hershey’s Special Dark. The product actually dates back to 1939 when Hershey’s put their miniature versions of their most popular chocolate bars of that time together. The original version included five mini-bars. Hershey’s Nougat-Almond was discontinued in 1942 and dropped from the pack. Semi-Sweet, which was basically the same thing as Special Dark, was replaced (or repackaged, depending on who you talk to) by Special Dark in the early 70s.

Since then, the four brands and flavors have remained fixtures, even if the packaging has changed.

(There’s also a Hershey’s Miniatures Nut Lovers version, but we do not acknowledge its existence at this time.)

Because of that, anyone who has acquired the four flavors enough times, be it from a relative’s candy dish or Halloween haul, will tell you where they stand on their order of deliciousness. It’s said that how you rank the Hershey’s Miniatures says something about you, much the same way the Myers–Briggs Type Indicator sorts your personality. No one actually says this, but maybe they should?

All we know is that if the following isn’t their ranking, they’re a human monster.

I love this season for many reasons. Among them is the reminder that Hershey's Krackel still exists. pic.twitter.com/IaQ9KD7Sob

First of all, can we all agree that The Mandela Effect is in play right now? Because I am 90 percent certain it was spelled “Krackle” when I was younger. Regardless, what makes this concoction of milk chocolate and crisped rice the best bite of them all is the way it balances flavor with texture. It’s the most dependable bar in the bunch when it comes to giving you a solid crunch and fair distribution of said crunch in its entirety.

Pro-Tip: Don’t just bite into the Krackel and shove it down your gullet. Savor the mini-bar until it melts into a crispy chocolate rice ball in your mouth. Then, and only then, take a bite. It’s a satisfying texture bomb.

Did You Know: Krackel originally featured almonds and peanuts before both were replaced with crisped rice in 1941, which kinda means the name Krackel didn’t make any sense for its first three years of existence. Almonds ain’t cracklin’, you know?

Milk chocolate and peanuts. That’s it. It’s so simple and yet so satisfying. The second of the two bars in the collection that give you that textured crunch, it falls short of Krackel in that it’s just not as dependable when it comes to distribution of the crunch-provider (in this case, peanuts). Sometimes you might get a really good peanut chunk in there, but sometimes you might just get some flecks. Hershey’s apparently modified the formula in 1995 to add more peanuts into the mix, but results still vary.

Fun Fact: Milton Hershey originally didn’t want the good Hershey name besmirched by a chocolate bar that included peanuts, so Mr. Goodbar was introduced as being made by the “Chocolate Sales Corporation,” which was not a real thing. Business people in the early 20th century were weirdos.

The flagship chocolate bar in tiny form. It’s not flashy. It’s not showy. It’s not full of bells and whistles. It simply is what it is and you’re either down with that or you’re not.

It’s rare for anyone to consider this one their top choice, mostly because it’s just so basic. But for American taste buds weened on years of Hershey’s chocolate, it’s the old and reliable that gets the job done once all the Krackels and Mr. Goodbars are gone.

Fun Fact: The taste of Hershey bars are distinct depending on where you buy them. The original American version is tangier, thanks to the butyric acid in it. Hershey’s formula is different for Europe and Canada, where they prefer a creamier, milder chocolate flavor. As you’ve probably guessed, the American version is factually the crappier version.

Here’s an experiment for you. Go find a dish and fill it with Hershey’s Miniatures. Then, leave the dish out somewhere. Your office is a good place for this, so you can take yourself out of the candy-choosing equation. Now let nature take its course. Check back on the dish a day or two later. You know what you’ll find?

Nothing left but Special Dark. Every. Single. Time. pic.twitter.com/3jzLumSzdm

Also, they’re bound to try to convince you that you should choose the Special Darks because dark chocolate is good for you. That, like so many things, is more wishful thinking than actually true. Especially when that dark chocolate is coming from, you know, Hershey (#HotHersheyTakes).

Fun Fact: In 2006, Hershey’s started selling Hershey’s Special Dark Miniatures, which is just the Special Dark bar and a version with peanuts. What have they done to you, Mr. Goodbar?