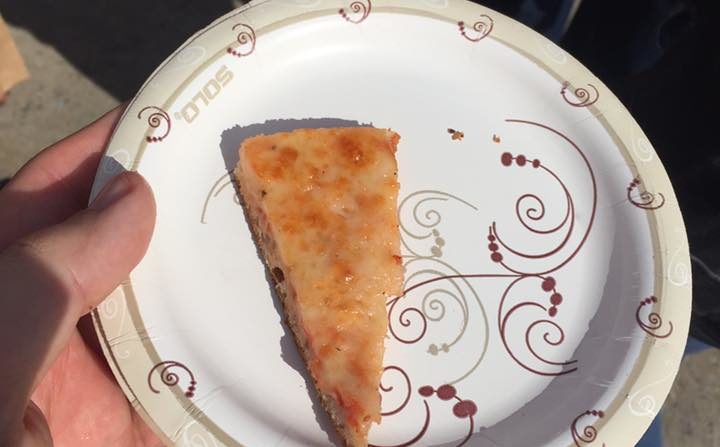 How do you make people angry? Well, one particularly effective strategy seems to be charging them a lot of money for a “pizza festival” without much pizza. The “New York City Pizza Festival” was held this weekend at a parking lot in Brooklyn, promising “an eclectic tasting of the best pizza in NYC,” then not offering much pizza, only doling out tiny slices of cold delivery pizza, hours after initially promised. It’s an approach that was likened to the infamous Fyre Festival. Gothamist’s Nell Casey has the breakdown of everything that went wrong this weekend, and boy, it’s a lot:

Hungry pizza lovers, some of whom spent $75 each to attend the New York City Pizza Festival, are demanding refunds for what they’re calling a “total scam” that had them waiting over an hour to enter a “shady parking lot” for empty tents and barely any food. And there’s a familiar name attached to Saturday’s widely panned event: the organizer is allegedly one Ishmael Osekre, the man behind last summer’s “EPIC DISASTER” African Food Festival.

“It was like the people from Fyre Festival decided to throw a pizza party,” quipped Connell Burke about the Pizza Festival, referencing the infamous luxury festival that promised supermodels and Ja Rule and instead delivered disaster relief tents and slices of cheese, and an indefinite stay on a Bahamian island.

“It was my girlfriend’s birthday so I got the VIP tickets, so I spent $150 total for the two tickets,” Burke told Gothamist. “There’s three pop-up tents to my left, one where they’re taking cold pizzas out of delivery boxes and cutting them. Those pictures don’t do it justice, because they look like they’re normal-sized plates but they’re actually cake-sized, like what you’d use for cake at a children’s birthday party. They’re small, tiny little slivers of pizza.”

The event, which took place in a parking lot on Flushing Avenue in Bushwick, was promoted as a “day long celebration of the dough, cheese, tasty sauces and delicious toppings.” But attendees report they were greeted with “pizza…smaller than a sample size,” according to one person on Facebook. “Cold and tasted awful.”

It gets better. Consider this photo from Chip Shannon, who posted to Facebook that “We came up all the way from DC and all we got was this slice.”

And in addition to Osekre being involved with that African Food Festival last year (which was described as 90-plus degree heat in a greenhouse with no air conditioning and expensive bottles of water, to say nothing of having next to no food vendors compared to their promises), it sounds like he and other organizers tried to promote a “Hamburger Festival” in the same place at the same time:

To make matters worse, the event organizers also appeared to have sold tickets to a “Hamburger Festival,” that was scheduled for the same exact time and place as the Pizza Festival. That event promised “mountains of french fries, oceans of ketchup and waterfalls of beer,” with admission prices ranging between $35 and $69.

“This was a rotten scam, they promoted this as a pizza festival and a hamburger festival. People who arrived early said there were about 5 pies cut into micro slices of really bad pizza. There were no hamburgers!” reads a Facebook group called Pizza Festival Scam Victims started to organize attendees looking for their money back. “Clearly this is a scam and the organizers should be held accountable.”

“Those people were sitting, waiting in line to get the burgers that were not there,” [attendee Connell] Burke recalled. “And when they tried to eat pizza, the people were like, ‘No, no, that’s for the pizza people.'”

You can check out all the pizza festival’s promises on their EventBrite page here. Here’s their description:

New York City makes the best pizza in the country, we are delighted to present an eclectic tasting of the best pizza in NYC?! Heck, we will conduct an anonymous vote to settle the NYC styled Pizza against Chicago Deep Dish pizza wars!

Whether it be pepperoni, mushrooms, onions, sausage, black olives, bacon, green peppers, extra cheese, plain or even experimental combos, there will be pizza for taste buds of all types!

It sounds like there wasn’t much pizza for taste buds of any type. And the blowback is escalating. Even the company hired to provide furniture had to make it clear that they weren’t putting on the event, and they’re even offering free drink tickets to wronged patrons:

So, yeah, this didn’t go well at all. And it’s understandable that the people who paid big money for next to nothing are upset. In the case of the Fyre Festival, that led to a lawsuit; we’ll see if anything similar happens here.