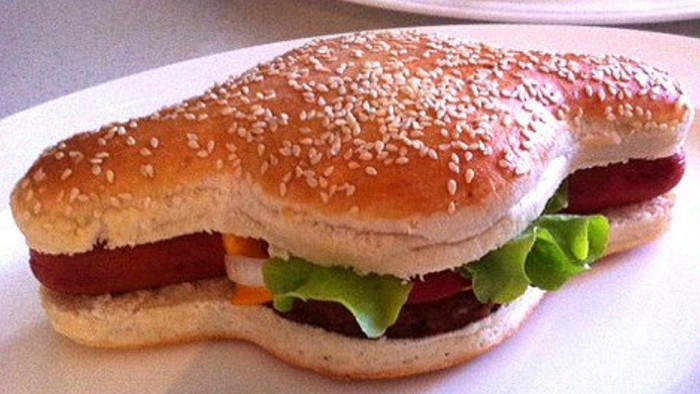 How many times have to been to a cookout and been asked if you wanted a hot dog or a burger? Or one of each? Or two of each? Now, thanks to one brave Australian, you no longer have to choose. Just ask for one Hamdog!

It started as a sales pitch to the Australian version of Shark Tank, where he was turned down for an investment by the sharks down under, but the appearance led to a viral push to fund the Hamdog to become a reality. What a world in which we live.

This isn’t merely just a hot dog and a burger placed on the same specially-designed bun. There is a certain craftsmanship to it. The burger is a patty split down the middle in order for a hot dog to be slapped right in the middle. The ends of the hot dog stick out from each side of the burger, making for quite a unique-looking menu item.

The Hamdog made its first appearance in 2009 but struggled to take off in the crowded food market. The recent boom in Australia, however, may give it new life. How this item is not being sold in some baseball stadium is beyond me, but I hope we see some baseball team add the Hamdog to their menus in 2017. I’m looking at you, Lehigh Valley IronPigs!

A couple of questions come to mind that I just have to ask. I refuse to put ketchup on a hot dog, but can’t eat a burger without it. What do I do now? The only other question left to ask is whether or not you would consider this a sandwich. We can save that debate for another time.