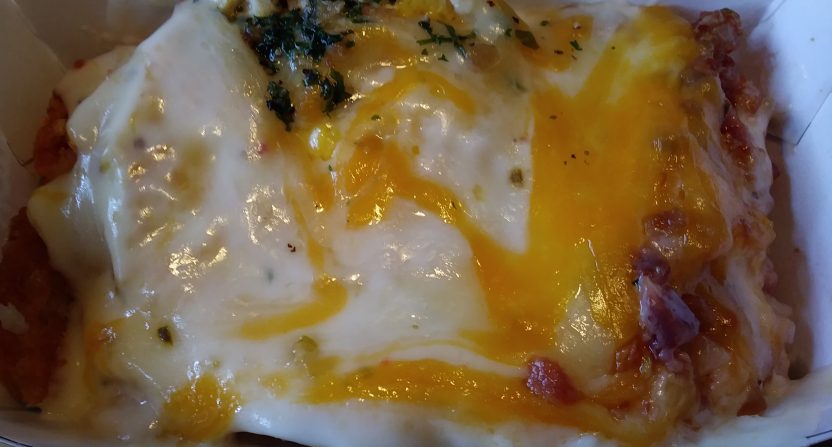 Note from Andrew: After a long DMV appointment recently, I stopped at Jack in the Box (in my town of Petaluma, California), saw a new “Munchie Mash-Up” display, and figured the Hangry Chicken Hash sounded like just the food I needed.

I then went home, shoved it in my face, and started talking about it on the internet (as one does) only to find that it was curiously absent from Jack in the Box’s national menu site, and that there was no mention of it anywhere else. I finally found the Munchie Mash-Up items listed on a Jack in the Box delivery service menu in Redwood City, California (under “Sides”), but was told this was the only mention of them out there:

@AndrewBucholtz @unmatchedsock @humidbeing Sorry to butt in, but so disappointed in the Internet. Your tweet and that link are the only evidence of this "food"! Thanks for posting.

My journalistic instincts demanded a further investigation, as did my undying love of deep-fried hashbrowns and odd food combinations.

On Friday, I convinced my wife Lisa to join me in a quest to eat and review all of these Munchie Mash-Up varieties. I ordered all three (for the whopping price of $9), plus a guacamole chicken burger, curly fries and a bacon ranch monster taco, brought them home, and we then ate our way through them while providing commentary for my recorder. I then transcribed our comments, while Lisa added further parenthetical asides after the fact. All italics that follow are hers, until my conclusion.

Lisa: I would like it noted that it’s 11:30 in the morning and we’re both totally sober doing this.

Andrew: That is a valid point. Perhaps we should not be sober.

I would also like to note that this is not our usual breakfast.

As background: we probably eat fast food about once a month. Not to justify this foray into stoner food to y’all, but… I think we’re both pretty diverse eaters. Andrew is much more of a pizza aficionado and I love burgers and wings, but spend mostly during the week eating sad desk salads so that I can gorge on stuff like this.

L: So, the first one I tried is this hashbrown buffalo chicken nuggets with cheese sauce. It’s surprisingly good. Must be consumed quickly. Like poutine, it has a shelf life of about 30 seconds.

Or else the nuggets will get soggy, and no one wants soggy nuggets.

A: Yes, I think this is delicious. I agree with you, it does have a short shelf life.

L: They have a nice buffalo sauce!

L: It’s not too spicy, it has the nice buttery flavor buffalo sauce should have.

A: Yeah, it’s more flavor than spice, I would say.

L: Their nuggets are surprisingly good.

A: Yeah. They’re not McDonald’s nuggets, but…

L: Right. I never eat Jack In The Box nuggets because I am a McDonald’s nuggets loyalist, but…

A: I would say they’re better than Burger King nuggets.

L: Oh, for sure. So, in between these, we’re eating curly fries.

A: That is the jalapeno one. So jalapenos, and cheese, and bacon bits, and hashbrowns.

L: So there’s no meat in this?

A: Well, bacon, but no other meat.

L: Those are some sad-looking jalapenos. Like they’ve been in a jar somewhere for like six years.

A: Not feeling it?

L: No. I’d honestly rather have their cheddar potato wedges.

L: Which this is kind of a riff on.

A: Yeah, it’s sort of along those lines.

L: You do get the nice… I don’t like eating the jalapenos, but I like the jalapeno juice that sort of makes things spicy.

A: Yeah. See, I enjoy the hashbrown texture more than wedges, so I think this will work for me.

A: Well, the jalapenos may not look the greatest, but they taste decent. But I agree, I like the other one better. This isn’t bad, but you’re right that it is pretty much the cheddar potato wedges, just on hashbrowns. The other things are more different than what they’d normally do.

L: What’s this last one?

A: This is their Wakey Bakey hash…

L: Which is not at all pot-influenced!

A: No, not at all! They’re not marketing any of this to stoners!

L: Which I think is kind of the genius of Jack In The Box. They know their market, they totally market to it. They’re open 24/7, I think…

A: And they’re open to those of us who aren’t stoners, but enjoy stoner food.

L: Yes, I’m definitely putting in whatever we type up about your sex noises at every fast food commercial ever. Even if we just ate, you will groan lustily at food.

Every time a fast food commercial comes on TV, which is often because when we’re watching commercials we’re watching sports, and sports advertising, regardless of any actual demographics, still basically advertises to man-children, so there are tons of fast food commercials, Andrew will make a groaning noise and say “That looks sooooo gooood!”, to no one in particular. We could have gorged ourselves on food recently and this will still happen.

A: This is fried egg, bacon, cheese, and the cheese sauce, I think.

L: Oh, good lord. I would first say that the fried egg, it’s not poorly done, but you don’t get the runny yolk. I love the runny yolk. But it’s fast food, I’m not trying to get my egg to order here.

A: Fair enough. That is a valid point; it might be better if the yolk was runnier. That’s a relatively hard-fried egg.

L: This one, they even put their herb butter on, I think?

A: Oh yeah, they did mention that. Is the butter a good choice, or a bad choice?

L: No, it’s delicious! It makes it like, fancy. It’s like, “Look, it’s not only this giant stoner thing, it’s fancy! With herbs!” And by the way, that’s the only green thing that’s been on any of these. Oh, I guess the jalapenos. But no, this is friggin’ delicious.

A: Yeah. Fried egg and bacon with cheese sauce and hashbrowns.

L: Since we’re being critical, I would do bigger chunks of bacon. I would probably even do strips of bacon.

A: Rather than the little bacon bite things?

L: Yeah. You’re not getting enough of the bacon.

A: Fair enough. So is that the biggest hit of the three?

L: I would say so. Just because it’s so different.

L: And we’ll both immediately have heart attacks after this taste testing.

A: No one ever said journalism was easy.

L: [Cracks up] For all you war correspondents out there!

A: Hey, we could be the Woodward and Bernstein of fast food here.

L: [Laughs] So what do you think of that?

A: The chicken nuggets are my favourite, but this is good. But you’re right that it is the most different.

L: I mean, I like eggs a lot. I definitely like the chicken nugget thing too. The jalapeno one is the biggest misfire.

A: Yeah, it’s not bad, but it’s not very different. And so much of fast food is trying to do things like that. Wendy’s had the jalapeno fries, everyone’s all “Jalapenos! Spicy!”

L: Yeah, I really think the potato wedges — which if people aren’t ordering, they should be — are delicious.

A: Sure. They’re pretty much the same and probably better.

L: Yeah. Because cheddar’s such a more interesting cheese too than whatever they’re using in this cheese sauce.

A: Than vague white cheese sauce?

I am (not) sorry for planting this image in your brain for all time about the white cheese sauce.​ 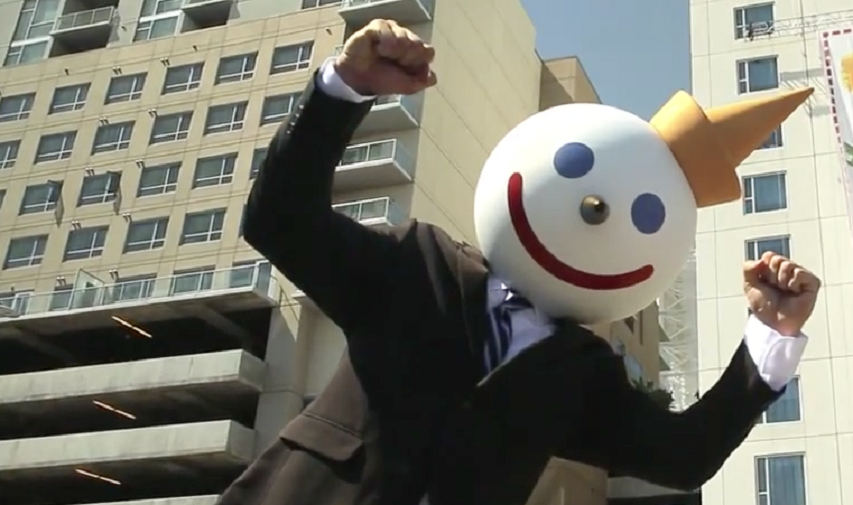 A: That’s moderately disturbing, but it’s not going to stop me from eating it.

A: Absolutely. Do you want any more of any of these?

A: Fair enough. Sorry I got all the food.

L: No, thank you for getting all the food.

A: Thank you for trying these. You’re welcome to some of my taco, too.

THIS IS THE MOST CANADIAN DAMN EXCHANGE EVER. I did not talk like this before I married a Canadian.​

L: Yeah, as a bonus, we should mention that Andrew got a… what is that?

A: A bacon ranch monster taco.

L: Actually, I do want a bite of that, because I’ve been wanting bacon so much. …Their taco shells are so flipping good, honestly.

L: They fry the shit out of them.

A: Yeah, we had a story on this, tacos are like their biggest selling menu item. They sell millions of tacos a year.

A: No, but A) tacos are like a buck, and even a fancy one like this is only like two bucks, and then B) they include them in all the Munchie Meals and that.

L: Ain’t nothing wrong with that. And I have the new guacamole fried chicken burger. I’ll say that I love the Carl’s Jr./Hardee’s guacamole burger, but they’re doing theirs with chicken at Jack In The Box, so I thought I would give their foray into guacamole a try and maybe get some fried protein down my gullet.

L: In addition to the three boxes of hashbrowns we just ate.

L: It’s not bad. I think I’d like it better if it was a burger. And is that their white sauce? I think it’s a ton of mayonnaise. I don’t know why they put mayonnaise with their guacamole. That’s an odd choice.

A: So it’s no Carl’s Jr. guacamole burger?

By which I mean some of JitB​’s more “unique” burgers are better than this guac sandwich, which I would pass on if I were you.

A: I don’t think the guacamole’s all that good, really.

L: No, because it’s boxed guacamole.

A: I understand, but I feel like there are better boxed guacamoles we’ve seen, even. Some fast food guacamole, I think, is better than that.

A: Yeah, it does have a good spice. I’m sorry that’s disappointing.

We only ate about half of everything. There is a bag of leftover Jack In The Box in my fridge if anyone wants it… At least there is until Andrew sees another commercial for fast food, is reminded that he has some in the fridge, and goes and eats these leftovers. Which is probably about a half an hour from now.

A: Okay, well, thank you for your participation in this taste test.

Andrew again: Little is still known about these mysteriously appearing Munchie Mash-Ups, and if they’re only in some California locations or if this is a prelude to a national rollout. If you can get them, though, I recommend trying them out. You have only your heart health to lose!