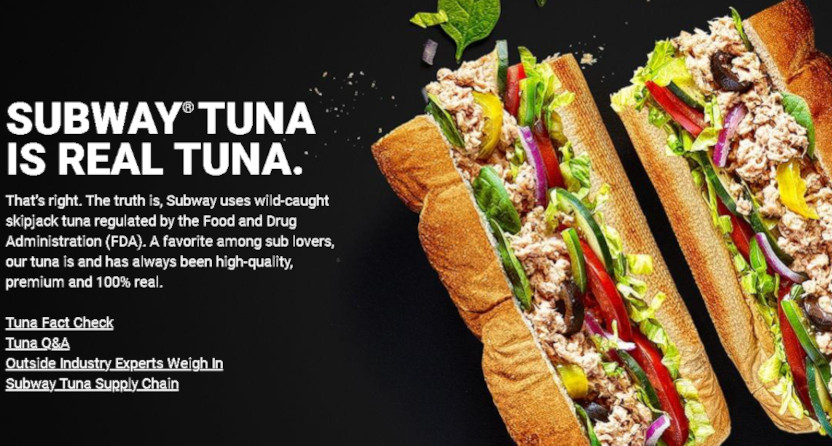 Last January, a strange saga started when plaintiff Nilima Amin and Karen Dhanowa filed a proposed class-action lawsuit against Subway, saying the sandwich chain’s tuna products were “completely bereft of tuna” and concocted to “imitate the appearance of tuna. ” That complaint has since been amended several times, with two versions dismissed by U.S. District Judge Jon Tigar in San Francisco. But last week, Tigar ruled that the most recent version (filed last November) can proceed (although with only Amin as a plaintiff now), saying it would be premature to accept Subway’s argument against the DNA test results underpinning that lawsuit. Here’s more on that from Jonathan Stempel at Reuters:

A federal judge said Subway can be sued for allegedly deceiving customers about its tuna products, including a claim it uses other fish species, chicken, pork and cattle instead of the advertised “100% tuna.”

U.S. District Judge Jon Tigar in San Francisco called it premature to accept Subway’s argument that any presence of non-tuna DNA might result from eggs in mayonnaise, or cross-contact with other ingredients that its restaurants’ employees handle.

“Although it is possible that Subway’s explanations are the correct ones, it is also possible that these allegations refer to ingredients that a reasonable consumer would not reasonably expect to find in a tuna product,” Tigar ruled on July 7.

…The judge also said the plaintiff Nilima Amin, an Alameda County resident who claimed to order Subway tuna products more than 100 times from 2013 to 2019, could try to prove that the salads, sandwiches and wraps “wholly lack” tuna.

…In a statement, Subway said it “serves 100% tuna” and was disappointed the “reckless and improper” lawsuit could continue.

“We are confident that Subway will prevail when the court has an opportunity to consider all the evidence,” it added.

The DNA results are the key part of this lawsuit, and they were described in a Reuters piece Stempel wrote last November around this specific refiling:

The Nov. 8 lawsuit relies on testing by a marine biologist of 20 tuna samples taken from 20 Subway restaurants in southern California.

The “eggs are in mayonnaise” argument could certainly have some relevance to the detected chicken DNA (otherwise, that’s a whole new take on tuna as the “chicken of the sea“), but that doesn’t seem to explain the detection of pork or cattle DNA. The “cross-contact” argument might explain that, but that’s also perhaps not a great look for Subway, especially when it comes to customers who are trying to avoid pork or beef for dietary or religious reasons. And while Subway says their restaurants “serve 100% tuna” (and has a whole section of their website devoted to discussing that in the wake of this lawsuit), it also seems strange that tuna DNA was only detected in one of the 20 samples, five percent.

Tigar’s ruling here is not a finding that Amin’s claims have merit, or even that the discussed DNA sampling is accurate. It’s just a ruling that Amin’s lawsuit against Subway can proceed, with Subway’s explanations so far not sufficient to get it thrown out. It’s quite possible a further stage here could see more exhaustive sampling than 20 samples, and/or more discussion around the validity of the tests run on those samples, and perhaps Subway will eventually prevail. But it’s interesting to see this lawsuit allowed to proceed, and it will be an interesting one to follow.