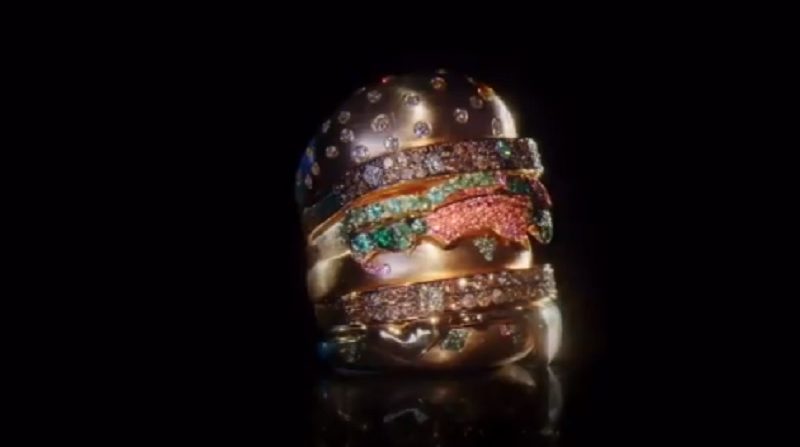 When you think of extravagance and glamour, you think of McDonald’s. Well, at least, that’s what the burger joint is hoping for in this one instance.

McDonald’s is unveiling a new line of Big Mac sizes (the Grand Big Mac, Big Mac, and Mac Jr.) and they’re going all out with the celebration. They’ve started a contest in which they’ll give away something they’re calling the “Bling Mac.”

Love is in the air! Literally. With the aroma of the 3 Big Mac burgers.? And we're celebrating with the Bling Mac—a gratuitously diamond-encrusted prize for the fan who tweets the best, most creative vows of Big Mac burger love to @McDonalds in the #BlingMacContest! ??? pic.twitter.com/EADWJzVOvU

The 18K gold, stackable ring of seven individual tiers of diamonds and gems is meant to resemble the ingredients of the Big Mac. Champagne diamonds were used to create the “two beef patties,” tsavorite has been turned into “lettuce, pickles, and onions,” and orange sapphire takes the form of McDonald’s Special Sauce. The entire thing is valued at $12,500.

Only one version of the ring will be designed by fine jewelry designer Nadine Ghosn, who will custom make it for the winner of the contest. In order to get your grubby hands on this fancy burger, McDonald’s is looking for the person who “tweets the best, most creative vows of Big Mac burger love.”

Contest entrants are already starting to roll in on the #BlingMacContest hashtag and they run the gamut of neat puns to disturbing imagery, which kinda sums up McDonald’s cuisine when you think about it.

"Everyday I thank God that I was able to meat you. From here on, lettuce continue to love each other. We were able to ketchup after years apart & fell in love. It's not bc of your hot buns, but bc of your saucy personality. What can I say? I'm Lovin' you" #blingmaccontest

When we met, I was engaged to another. She was a real Whopper. But after that first time I found myself coming back, again and again. Idk if it was your sauciness or the way you felt in my hand but I fell in love with you. You’re the only #1 for me. #BlingMacContest

You’ve got until Valentine’s Day to get your entry in.

The contest is reminiscent of a similar promotion that McDonald’s ran last August in which London designer Julien Macdonald designed a luxury takeaway box for their new line of “gourmet” burgers. The end result featured a baroque gold print, sequins, and crystals. It was auctioned off to benefit the Ronald McDonald House, so, unfortunately, don’t expect to be able to put your Bling Mac inside one of these boxes if you win.