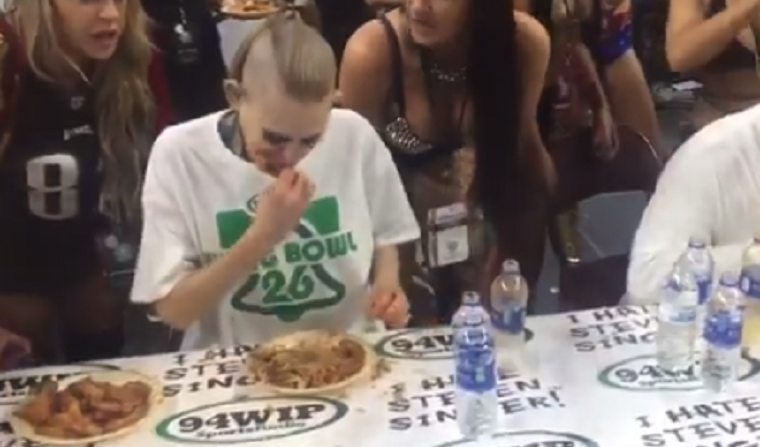 What did you eat for breakfast? A bowl of cereal? Maybe some toast or a breakfast burrito or an egg sandwich on a bagel on the go?

Competitive eater Molly Schuyler spent her morning in Philadelphia at the annual Wing Bowl and walked away the champion after setting a new Wing Bowl record by consuming 501 chicken wings. The runner-up ate 396 wings, so this wasn’t really much of a contest at all.

It is the first time in the 26-year history of Philadelphia’s Wing Bowl any eater has gone over 500 wings (the previous record was 444, set in 2015), and it is the second time Schuyler set a Wing Bowl record.

The Wing Bowl is broken into three rounds, with the field of competitors being trimmed after each round. The first round lasts 14 minutes and is followed by a 14-minute second round, with a two-minute mini-round to finish things up.

Competitors include a wide assortment of bonafide champion eaters and local residents who reach the table by accomplishing various eating challenges. The contenders separate themselves fairly quickly from the pretenders as they work their way through plates of wings, while others hit a wall early on or just realize they have no shot and simply bask in the glory and enjoy their free plate of wings.

The rules are simple. Clean the chicken off the bones to keep eating, and if you heave, you leave. After each round, the field is trimmed and whoever eats the most wings through all three rounds is crowned the champion. On this Friday, Schuyler would have no competition to fear.

Ever have 500 wings in 30 minutes for breakfast? ? pic.twitter.com/9glTAHPPa1

After the first round, Schuyler was one of three eaters to consume over 200 wings with a new first-round record of 241. After two rounds, Schuyler was up to 455 wings, with the next closest eater only getting down 382 wings. Game, set, match.

Schuyler won the Wing Bowl in 2014 to become the second woman to win the Wing Bowl (Sonya Thomas was the first in 2005). She won again in 2016 and now adds her third Wing Bowl title to her profile. Schuyler finished second in 2015, losing by just four wings. Other three-time winners of the Wing Bowl include Bill “El Wingador” Simmons (not that Bill Simmons, as the nickname hopefully makes clear), Joey Chestnut, and Jonathan “Super” Squibb.

It became pretty clear toward the end of Round 2 that Molly was going to win this. Take a look at the video to see how she continued to plow away at the wings while her competition nearby was clearly struggling. After easily cruising through the first two rounds, Molly had already set the record for most wings eaten. So she was able to put some serious distance between the previous mark and her new standard.

The Wing Bowl originally started off as a promo for Philadelphia sports radio station WIP to be held the Friday before the Super Bowl at a time when frustration with the Eagles’ inability to get back to the big game was growing. The event has become a staple of the Philadelphia sports scene, for better or worse. With the Eagles in the Super Bowl this weekend, the Wells Fargo Center was full of energy. Ric Flair was a celebrity guest at the Wing Bowl and played to the home crowd by picking the Eagles to beat the Patriots on Sunday.