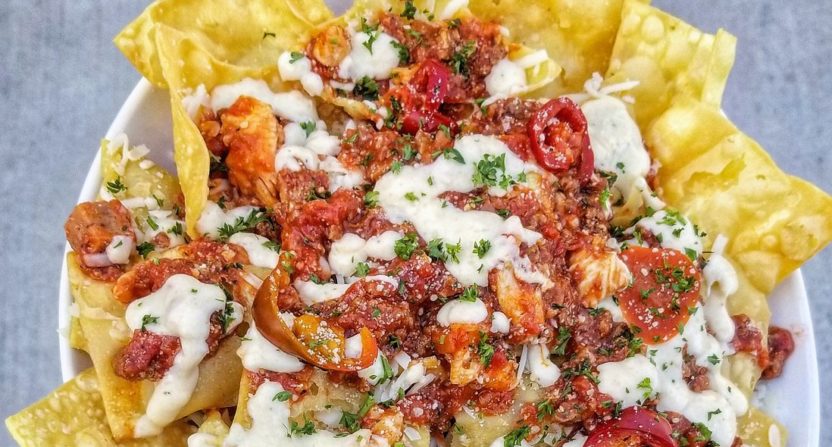 Olive Garden doesn’t have the best reputation when it comes to serving authentic Italian cooking. That reputation isn’t going to get any better with the news that the restaurant chain has started serving “Italian nachos.”

Technically, the dish is referred to as “Loaded Pasta Chips,” but we all see what you’re doing, Olive Garden. As Eater details, the dish in question uses “fried lasagna pieces” as the nacho chips, which should have disqualified it from ever reaching someone’s table but apparently there were no safeguards in place to make that happen. The “chips” are topped with mozzarella and parmesan cheese, a meat sauce containing chicken, meatballs, and sausage, cherry peppers, and finished off with some Alfredo sauce just because they can.

Foodbeast has sampled the “nachos” for our benefit and comes away with an “actually not the grossest thing in the world” take.

To us, the lasagna chips had a crunch similar to that of wonton chips, but they didn’t crumble as much and held up the mound of toppings on it pretty well. The Loaded Pasta Chips are definitely more savory than spicy, but the creamy, nutty Alfredo harmonizing with the hearty meat sauce made you want it that way. They are incredibly rich, so you’ll either need the squad with you to finish them all or expect to take some of it to go.

We suppose that we might be judging Olive Garden a little too harshly. To be fair, we also live in a society that has deemed it okay for American Irish pubs to serve “Irish nachos” for decades. We have no one to blame for Italian nachos but ourselves.