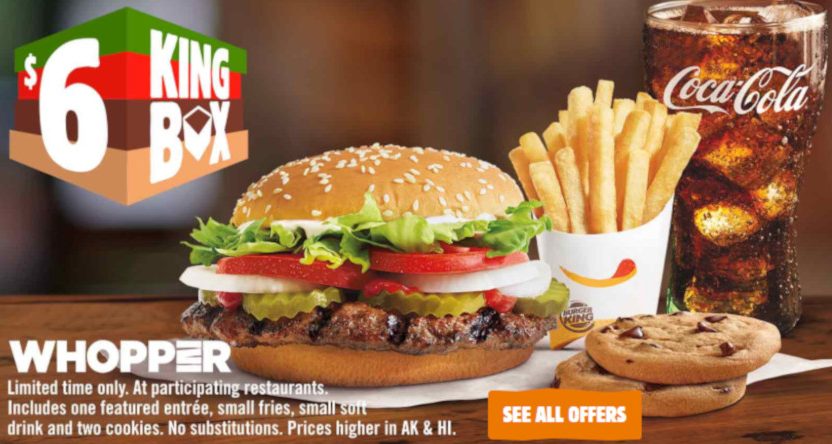 Free fast food for life sounds great, right? Well, one Oregon man is claiming that his local Burger King didn’t live up to that promise. As per Aimee Green of The Oregonian, 50-year-old Portland-area resident Curtis Brooner has filed a lawsuit seeking $9,026, the estimated cost of a Whopper meal a week for the next 22 years. Brooner is doing that after he got stuck in a Burger King restroom for an hour, was apparently verbally promised free food for life, ate there for free for the next 13 days, and then was told district management had cancelled that offer:

According to Brooner and his lawsuit:

Brooner had just finished a meal and stepped into the single-user restroom. When he tried to leave, the lock on the door jammed. After several minutes of trying to get the door to open, he called the phone number on his receipt. Several employees responded, ultimately handing him a hard plastic-edged card and later a fly-swatter and instructions to squeeze it through the crack between the door and the door frame to move the locking mechanism.

…Brooner was too shaken to immediately leave the restaurant — and that’s when employees gave him a bandage and some ointment for his cut and a manager apologized and offered him a verbal promise that he could always eat there for free, Brooner said.

“She said, ‘Yeah, man. We understand it’s a terrible situation and we want to make it up to you,” he recounted.

Even before the promise, Brooner said, he frequented Burger King nearly every day because he enjoys the food and it’s just one freeway stop from his work in Troutdale. He said after the free-meal promise, he ate there for free every day for the next 13 days, with the exception of Dec. 24 and Dec. 25. Twice, he ate breakfast and dinner there on the same day, he said.

But when he went in on Dec. 28, Brooner said, he was told “district management” had yanked the free-meal pledge.

On one hand, some sympathy for Brooner is understandable; he wound up stuck in that washroom for over an hour on Dec. 15 before a locksmith was finally able to free him. And sure, if a restaurant offers you free food and then pulls that back, that’s not great. But on the other hand, does having an hour of your time wasted really mean you should be able to get free food for life, especially if you’re planning to take advantage of that every day (and twice a day some days)? It’s interesting that his lawsuit is for a sum based on a Whopper meal a week, far less than the amount he was actually consuming.

And, on an unrelated note, The Oregonian‘s piece mentions that Brooner “was convicted in 1994 of first-degree sexual abuse and first-degree sexual penetration for crimes committed in 1992 in Multnomah County. He was sentenced to about 6 ½ years in prison and a requirement to register as a sex offender, which he says is for life.” While Brooner says those charges are old and that he’s been a model citizen since, that still doesn’t really make him look great.

At any rate, we’ll see how Brooner’s lawsuit goes and what’s eventually decided there. But it’s certainly not all that typical for someone to get stuck in the washroom at a Burger King, get promised free food for life, and then have that taken away by “district management” after he chooses to use that by eating there every day. This is definitely an unusual story, and it will be interesting to see how it ends.

7 thoughts on “Oregon man has free Burger King for life (given after he got stuck in a restroom) revoked after eating there on 13 of 15 days, sues”