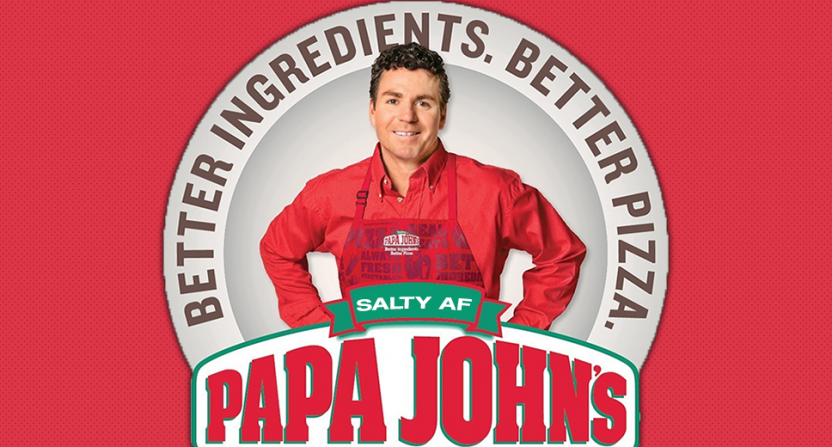 Like a divorced dad letting his kids read the legal settlement in order to win back their trust, Papa John is pulling out all the stops in order to get his pizza company back.

It’s been quite the couple months for the former pizza mogul. To recap, John Schnatter, the founder and chairman of Papa John’s, no stranger to making poorly-thought-out comments, used the N-word during a conference call in which he was attempting to figure out how not to be associated with people who use the N-word. He then resigned as chairman of the board and stepped down from the Louisville Board of Trustees. Major League Baseball suspended its Papa Slam promotion with Papa John’s, whose shares tanked. The company removed Schnatter’s likeness from all of their promotional material and logos. Meanwhile, Louisville removed Schnatter’s name from the Center for Free Enterprise at their College of Business, which he had donated $4.64 million for and the school also removed the name Papa John’s from their football stadium (formerly known as “Papa John’s Cardinal Stadium”), which was doable because the naming rights belonged to Schnatter and not the company. Then, Schnatter appeared on a radio program and blamed the agency on the conference call for “bullying” him into saying the N-word. Then, a letter he wrote to Papa John’s board of directors after stepping down surfaced, revealing how he felt betrayed on all sides. Since then, Ball State, Schantter’s alma mater, has also voted to remove Schnatter’s name from a building he donated money to.

We guessed that the next logical step would be for Schnatter to pull a Michael Scott and start a rival pizza company out of spite. He hasn’t done that yet, but he’s doing the next best thing: launching a spite website in an attempt to…well, it’s not really clear.

SavePapaJohns.com features a message from Schnatter that appears to be aimed at Papa John’s employees and franchisors, letting them know that as the company’s largest shareholder, he still knows what’s best for the company and that the board is trying to silence him. The site also includes an entire section with copies of legal documents, select links to positive press coverage, and a personal note from Schnatter to employees.

As I said in a recent letter, I miss you all very much.  More than words can express!  Papa John’s is our life’s work and we will all get through this together somehow, some way.  I can only imagine how difficult this entire situation is on you, and I’m very sorry you all have to go through this.  Know that in every minute of every day you are all in my thoughts and prayers.

That letter Schnatter is referencing is a full-page ad he took out in Wednesday’s edition of the Louisville Courier-Journal. Schnatter seems to think that there is a large group of people working for Papa John’s who want to see him back where he “belongs,” but those employees are probably too busy just trying to earn a living and remain gainfully employed to care about the concerns or platitudes of mega-rich Schnatter. Still, that’s certainly not going to stop him from pretending they miss him.

To be fair, the entire saga surrounding his departure has hurt company sales and Papa John has had to offer financial assistance to struggling franchises. We can’t imagine there’s much Schnatter could do to fix the problem he created at this point, other than maybe shutting down this website and going away for a long time.

1 thought on “Papa John’s founder has started his own truther website, which will definitely help matters”