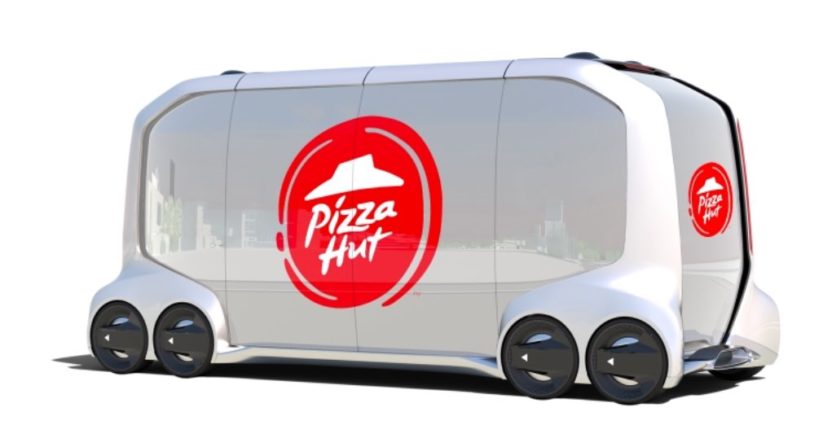 Pizza Hut seems willing to do just about anything and everything to stem the tide of customers leaving them for Papa John’s and Domino’s. While they continue to tweak their pizza-specific offerings (beer-infused crust?), they’re also trying to make it as easy as possible for people to get their hands on those pizza pies, even if they’re not interested in coming into the restaurant.

That includes “smart shoes” ordering systems and even sweetening the deal by offering actual booze delivery with that beer-infused pizza crust.

According to the No. 1 fan of brands himself, Darren Rovell, The Hut is now ready to roll out self-driving vehicles to deliver that pizza to you.

Pizza Hut just unveiled a vehicle, in partnership with Toyota, that will drive to a delivery location without a person at the wheel. Company says plans to use it by 2020. pic.twitter.com/FQXTKzymyg

The move is a “global partnership” between Pizza Hut and Toyota for a self-driving concept vehicle called e-Palette. Toyota plans to test out the vehicle in several places around the world, with the United States being one of them. While Rovell notes the plan is to use them by 2020, it’s possible we could see them on the streets as soon as 2019.

Pizza Hut isn’t reinventing the wheel here, they’re simply playing catch-up with rivals big and small. Domino’s Pizza and Ford launched a similar collaboration back in August. They’ve been testing the product in Ann Arbor but with Ford’s plan to start production of self-driving vehicles in 2021, it’s unclear when you’ll see these autonomous pizza cars on your street.

@zumepizza is an innovative start-up based in California that uses robotic technology to make fresh pizza en-route to ensure warm deliveries straight to your doorstep. #StartupoftheWeek https://t.co/M5dPk3ZNs2 pic.twitter.com/wzmMqRu5Yk

If you’re desperate to know what it’s like to get a pizza delivered by a robot, head to the Bay Area. There, Zume Pizza has been using a robot named Doughbot to make your pizza in the back of a delivery van while it’s en route to your house. It’s still driven by a human, but you’ll know for sure that your pizza was made fresh and to-order. According to Zume, the robot also ensures that each pizza has the perfect amount of sauce and an exact crust-to-pie ratio.

Good luck getting that from your average Domino’s employee.