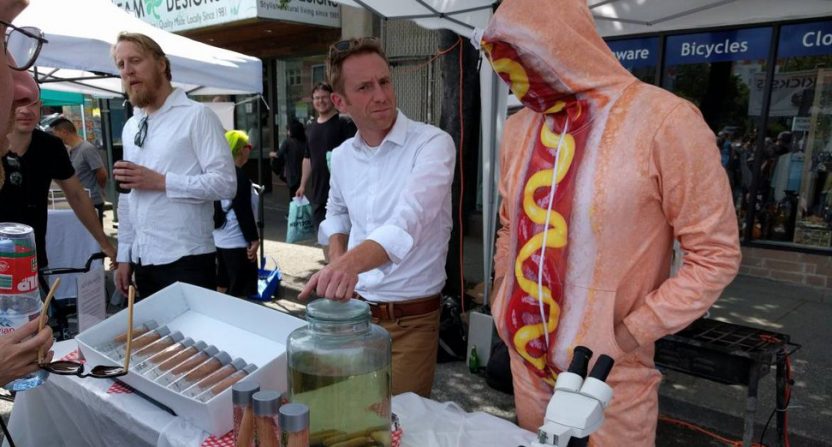 There are plenty of bizarre things sold in this world, but Douglas Evans perhaps took that to another level at last weekend’s Car Free Day Festival in Vancouver, British Columbia, Canada. Evans sold “hot dog water” for $38 Canadian (currently $28.77 U.S.) a bottle, and made plenty of claims about what it could do for you:

The drink’s impressive marketing advertises it as gluten-free, Keto diet-compatible, rich in sodium and a source of electrolytes.

“So the protein of the Hot Dog Water helps your body uptake the water content, and the sodium and all the things you’d need post-workout.”

A bottle of Hot Dog water would set the adventurous water fan back $37.99, while a “Father’s Day special” will get you the bargain price of $75 for two. Hot Dog Water lip balm, breath spray and body fragrance were also for sale.

Well, that’s certainly a thing. And it’s notable that its creator intended it as more of a commentary than an actual product:

The unusual beverage was billed as “keto-compatible,” gluten-free, rich in sodium, and shown to increase vitality and brain function. Of course, such a miraculous beverage commands a hefty price: $38 per bottle, or a Father’s Day special of two bottles for $75. Signage on the vendor’s white tent advertised the hot dog water as a creation of L&A Labs, but it was actually the brain child of Douglas Evans, Hot Dog Water CEO and an artist, who tells Global News he created it as a stunt. He calls it “a commentary on product marketing, and especially sort of health-quackery product marketing.”

Evans points to scientifically baseless products like raw water and pure water, for which consumers actually do shell out big bucks. “I think people will actually go away and reconsider some of these other $80 bottles of water that will come out that are ‘raw’ or ‘smart waters,’ or anything that doesn’t have any substantial scientific backing but just a lot of pretty impressive marketing,” he told Global News. A disclaimer at the bottom of the hot dog water’s marketing materials read: “Hot Dog Water in its absurdity hopes to encourage critical thinking related to product marketing and the significant role it can play in our purchasing choices.”

Evans himself spent real money to make his point, though: he estimates the bottles, labeling, and marketing materials cost him about $1,200. (He said the hot dog water stunt also got about $500 in grants, and festival organizers waived his table fee.) Not everyone at the festival picked up on his joke, though; Evans says he sold about 60 liters of the stuff.

So, yes, a lot of people bought hot dog water. (No word on how many bought chocolate starfish as well.) And Evans’ effort appears to have gone pretty well overall. But if you’re going to pay almost $30 U.S. for hot dog water, you might want to ask yourself some questions…