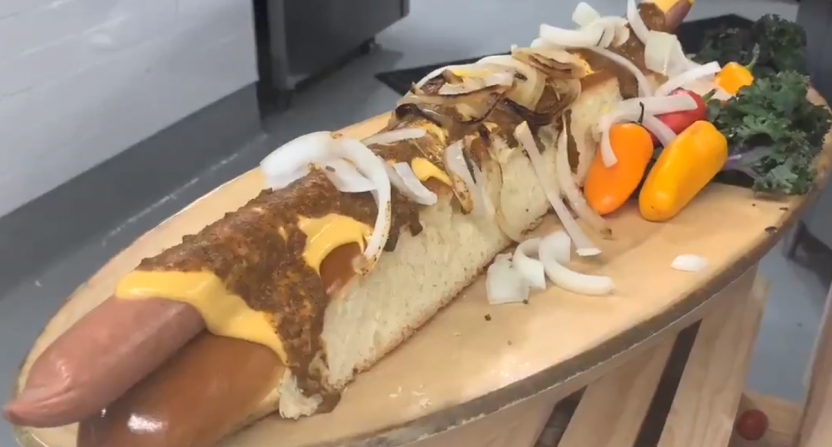 Last night, Arash Markazi took to Twitter to highlight a ridiculous ballpark food item on offer for those in attendance at the World Series.

Everything is bigger in Texas including the $27.50 Boomstick, which is a 2-foot all-beef hot dog, smothered in chili, nacho cheese, jalapenos and caramelized onion. It weighs three pounds. #WorldSeries #Dodgers pic.twitter.com/KIVHtHOSnh

The thing is, Globe Life Field in Arlington might be brand new, but the boomstick has been around for a long time. The neutral site park brought over some of the classic staples from the Rangers last home, and they obviously didn’t have to bring them that far.

so what do they do with the other stadium across the parking lot? pic.twitter.com/BIYL6ACpVn

The Boomstick dates back to 2012, and we (well, a former version of we, but still we) wrote about it then:

First, we start in Texas. On Opening Day, the Rangers sold 191 of their “Boomstick” dogs, and considering the Opening Day crowd of slightly over 49,000, that’s not even half a percent of fans in attendance buying this dog. The Boomstick is two feet long and costs $26, loaded with jalapenos, cheese sauce, onions, and chili. Why would you even want to eat this? A report from Fox Sports Southwest says the bun has the density of a pretzel, and that the dog has over 4,000 calories.

From the late Richard Durrett at ESPN:

So how many people are willing to pay $26 for a one-pound hot dog?

The nearly two-foot-long dog can weigh nearly two pounds, once you pile on the chili, onions, mustard, ketchup, relish and whatever else you want. And there were a number of fans either attempting to eat the entire hot dog by themselves or sharing the dog with others around them.

The Rangers have a special carrying case for the hot dog, complete with handles, so fans can get it to the seats.

It will be on sale all season and is called the “Boomstick” at concession stands in honor of right fielder Nelson Cruz.

Nelson Cruz hasn’t played in Texas since 2013, so it’s kind of fun that what was originally an homage to him remains part of the ballpark experience. Let’s hope there are special World Series commemorative carrying cases for anyone in attendance who dares to try one of these monstrosities. (They would make a great souvenir, you can take them home and use them to carry all your everyday two-foot hot dogs around the house.)

Perhaps most surprisingly, the cost hasn’t really gone up! Sure, it costs $27.50 now relative to $26 in 2012, but according to some very scientific research, inflation adjustment alone would see a $26 item in 2012 cost basically $29.50 in 2020. We’re willing to bet that you won’t find a better value for a 4,000 calorie ballpark hot dog anywhere in the greater Arlington area.

(Unless they’re still selling for $26 across the parking lot.)