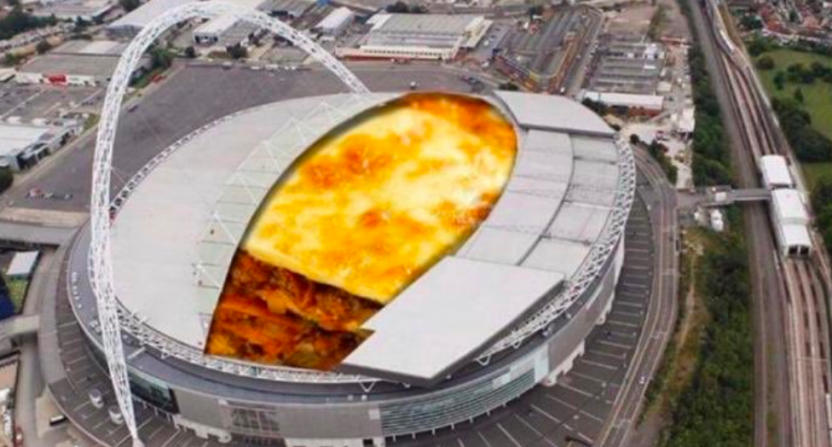 In the midst of the ongoing COVID-19 pandemic, misinformation and rumors are spreading like wildfire while everyone scrambles to keep up with what’s true and what’s not. It’s the perfect scenario for fake stories like dolphins returning to Venice canals or elephants getting drunk after eating too many grapes in an empty vineyard to flourish. We’re more willing to suspend our disbelief because it’s hard to know what’s even possible at a time like this.

That’s the only way to make sense of the fact that a rumor that the UK government was requisition London’s Wembley Stadium in order to fill it with lasagna layers and cook the world’s biggest lasagna actually required an official statement of denial.

29-year-old Billy McLean decided it would make for a funny joke in his WhatsApp chat group if he made up a story about the Ministry of Defence building a massive Italian dish the size of a football stadium, heated by the underground heating and kept warm by the closed roof.

“My sister, her boyfriend’s brother works for the Ministry of Defence and one of the things that they’re doing to prepare … is building a massive lasagna. At the moment, as we speak, they’re building the massive lasagna sheets…They’re putting the underground heating at Wembley on, that’s going to bake the lasagna, and then they’re putting the roof across and that’s going to recreate the oven, and then what they’re going to do is lift it up with drones and cut off little portions and drop it off to people’s houses.”

McLean’s bit is certainly detailed, but, like, very clearly a joke…right? Well, the timing was right for people to take this joke very wrong and pretty soon the recording was being shared outside of the group, quickly going viral within hours.

UK: whatsapp voicenote about the Ministry of Defence making lasagne the size of Wembley

Giant lasagne at Wembley, garlic bread in the Channel tunnel, and the Home Office working the Ministry of the Magic: The hilariously fake voice notes going viral on WhatsApp https://t.co/ztqRG8lpgs

“It went around the football group,” McLean told The Guardian. “Then I got people that I know forwarding it to me, not knowing it was me, or forwarding it to me asking if I’d heard it. Ex-girlfriends were coming out of the woodwork asking was it me.”

By Friday, the country’s Football Association was forced to confirm they had heard the clip but were unaware of plans to turn the English national football stadium into a humungous potluck dinner. Though we should note that they said they have no plans…but it doesn’t mean turning a football stadium into the world’s biggest lasagna is off the table, so to speak…