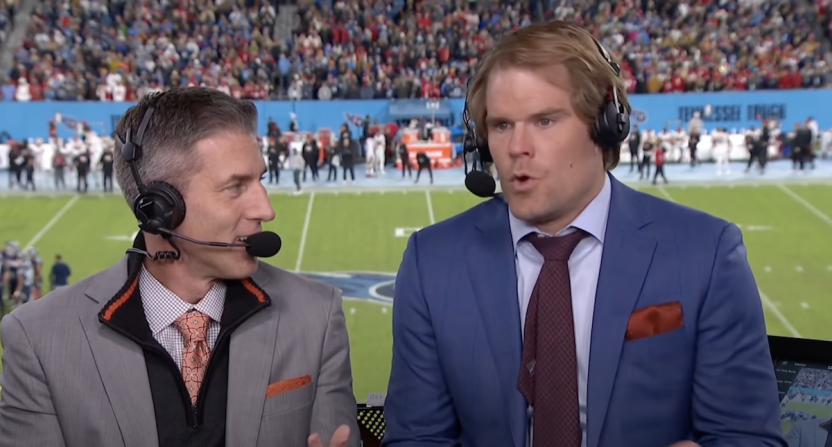 The NY Post’s Andrew Marchand dropped a huge scoop Wednesday night when he reported that Fox NFL analyst Troy Aikman was in deep negotiations with ESPN to be their new Monday Night Football analyst. The news sent shockwaves all over the NFL world and opened up a lot of questions about how the dominoes will fall for ESPN, Fox, Amazon, and other NFL broadcasting partners.

One of the most obvious questions that came up was who will replace Aikman in the booth at Fox? He and Joe Buck have been calling games together for 20 years and this would truly be the end of an era. Whether you like them or hate them, they have strong chemistry that is hard to duplicate. Buck recently said that Aikman is “legitimately one of my best friends and I think he would say the same about me.”

Troy speaking for everyone still watching this one 😂😂 pic.twitter.com/bObFae5CaZ

But if Aikman does leave, that means Buck needs a new partner, and there are plenty of potential options being discussed. Drew Brees, Sean Payton, Sean McVay, and others have been thrown out there as options, though all of them would require some heavy lifting on the part of Fox.

Meanwhile, Greg Olsen appears to be the obvious candidate, having spent last season in the booth with Kevin Burkhardt. Olsen has done solid work for Fox and is considered by many to have already been the heir apparent to the No. 1 analyst job whenever Aikman left or retired.

And it appears, based on a lot of chatter in NFL circles on social media, that Olsen has a lot of fans out there assuming this will be the case as well.

Joe Buck and…dare I say Greg Olsen as the new number one crew for FOX? https://t.co/lnpZBb1Hwv

The simple solution to replacing Aikman is Greg Olsen. The more complicated but fun solution is Sean Payton. https://t.co/LzUH1VTsQI

Give me a Joe Buck/Greg Olsen booth please and thank you https://t.co/rLjMsIbRyT

Troy Aikman had great chemistry with Joe Buck for 20 years. I really wonder how he'll do with someone new.

And FOX would be insane to not bump up Greg Olsen to the top spot. He's everything Tony Romo should have been.

There’s really no good reason not to slide Greg Olsen right into the number one chair. https://t.co/y7hNXly3qj

While moving Olsen up is the most obvious move, we’ll see if the seismic shifts of Aikman’s departure make them go for a wild card decision instead. Either way, expect Olsen to be a top analyst for the network for years to come.