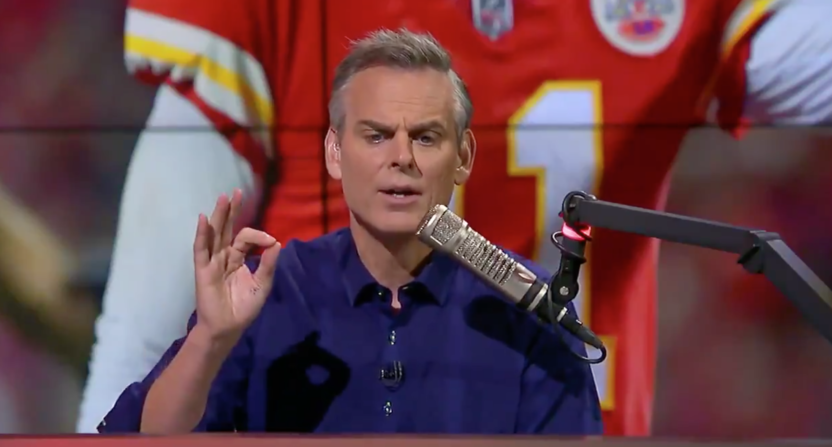 Cowherd was reacting to the Kansas City Chiefs, who just improved to 4-0 following a Monday Night Football victory against Washington. The Chiefs are coached by former longtime Philadelphia Eagles head coach Andy Reid, and Cowherd used this as his entry for a hot take about the intelligence of the Philadelphia sports fan.

Philadelphia is the dumbest sports city in America pic.twitter.com/gx10OchApB

Ahh yes, the “dumb sports fans who are afraid to read” comment. So original, Colin. Did you run out of time to make a snowballs-at-Santa reference, or what? Let’s put aside the minor points made without actual context, like why Philadelphia lost being the nation’s capital or the stadium jail joke that hasn’t carried water in over a decade (because there is no jail cell below the stadium). Let’s instead focus on the more substantial bullet points in Cowherd’s ridiculous rant.

There are so many inaccuracies and misguided viewpoints here to handle that I’m not even sure where exactly to begin. But because this rant was focused on Andy Reid, let’s start there and set a few things straight.

First of all, was Andy Reid run out of town by Philadelphia? It can be easy to come to that conclusion given how the Reid era in Philly came to an end, but to simply say Philly fans are dumb for turning on Reid is misguided. Reid coached the Eagles for 14 seasons and will always be regarded as the most successful head coach in franchise history, but that was a 14-year run without a Super Bowl championship and with four losses in the NFC Championship Game along the way. Reid had done all he could in Philadelphia, and by the time he was finally let go, it was clear it was time to change things up. In the business of professional sports, the ultimate goal is to win a championship, and Reid had proven over the course of 14 seasons he was unable to get the Eagles there.

When a guy on a channel no one can find? gets mad on line. @ColinCowherd ??‍♂️ pic.twitter.com/zFlqaHBEWz

Sure, Reid was a really good coach for the Eagles. Nobody would dispute that. But he was also seeing his win total diminish three straight seasons from an 11-win season in 2009 to 10 wins in 2010, to eight in 2011 to four in 2012. How Cowherd can’t pick up on the fact that it was time to sell on Reid given the track record is unfathomable. Reid may have had some harsh critics, but the Eagles needed a new messenger and a new spark.

And by the way, what is happening in Kansas City is no surprise to Eagles fans. Reid has built a team that is perennially strong in regular-season play, yet Kansas City has just one postseason win with him as coach (although that is one more postseason win than the Eagles have had since 2008 — yeah, that’s right, Reid won zero playoff games in his final four seasons in Philly).

How many coaches get 14 seasons in one city without a championship parade? Not too many, especially in this day and age. Andy Reid wasn’t run out of town. His message and methods were just falling on deaf ears in the locker room. His own players, whom he drafted and brought in through free agency, ran him out of town. Sometimes a change of scenery does good for both sides.

In Philadelphia, the fans demand to win. If demanding better of an organization on a steady decline makes us dumb, then so be it.

Colin Cowherd bought oregano from that dude on South Street and he's been mad every day since.

OK, but what about Terry Francona? How could the Phillies have run Francona out of town?

Another point without full and proper context on the situation. Terry Francona was an awful manager with the Phillies, in his first job as a manager, even if the front office didn’t help him out much.

His four-year run as a manager of the Phillies saw him working with very little talent while the team was still a few years away from seeing guys like Jimmy Rollins and Chase Utley and Ryan Howard build the nucleus of a team that would go on to win a World Series.  Even though Francona was managing a roster with Scott Rolen and Bobby Abreu and Gregg Jefferies, he also had the likes of Kevin Sefcik and Rico Brogna and Wendell Magee. His pitching staff had Curt Schilling, who himself grew frustrated with the talent level around him and essentially talked his way out of town.

But some of the failures were Francona’s fault. Cowherd didn’t watch Francona manage a bad Phillies team for 162 games for four years. He didn’t see the inability to pull off a double switch properly. He didn’t see a manager who was still learning on the job fail to improve the way he managed a staff and make calculated decisions in the few times a clutch situation arose. I did, and he was not good at it.

Even Francona himself admits his run as a manager in Philadelphia was not good. There is a reason nobody in baseball hired him for four years before he took on the job in Boston, where he no longer had to worry about decisions like when to pinch hit for your pitcher.

Mind you, this is the same fan base that just gave a standing ovation to Pete Mackanin in his final game as manager of a similarly bad Phillies team despite going 30 games under .500 this season and 50 games under .500 the last two seasons. We’re so dumb.

Nobody was running Jay Wright out of town

One of the more bizarre and asinine points brought up by Cowherd was the pressure on Villanova men’s basketball coach Jay Wright. In fairness, Cowherd covered his tracks by first saying Philly sports fans were all over Wright for early-round exits from the NCAA men’s basketball tournament prior to winning it all two seasons ago. To some degree that might be fair, but I can count on my left hand how many people legitimately thought Wright should be canned and still have fingers left over. Were some Villanova fans not happy seeing their Wildcats be bounced early from the tournament? Of course. But fans realized that Wright also took Villanova to a Final Four before winning it all. The man is well-liked in the entire college basketball scene. Even Temple and St. Joe’s fans have some level of respect for Wright because the man has always been all class in Philly.

Cowherd outed himself as lacking knowledge of the Philadelphia sports base with his comments about Wright. For starters, nobody is calling up the Philly radio stations putting pressure on Jay Wright, because college sports doesn’t get that kind of attention in the city. And to suggest Philadelphia was running Wright out of town is completely off base because this is not a situation where a city rallies around one particular college basketball program. There are multiple Division 1 programs in the city, and they all absolutely hate each other. It makes the passion for college basketball strong and the rivalries fun. And Villanova is the most hated of all the local schools. And yet, even the fans of the rest of the Big Five would admit nobody would be sane to suggest Villanova should get rid of Wright. There is more talk about Wright one day leaving on his own for a job in the NBA or perhaps another college program than there is a line of people offering to give Wright a ride to the airport to get out of town.

But Cowherd wouldn’t know that because he is too busy making up his own fake news-fueled sports rants for the sake of a few retweets and social media shares on Facebook.

This is just how Cowherd gets his kicks, or his clicks. He zeroes in on an easy target and fires away at the low-hanging fruit the way so many national blowhards will. It will generate a viral reaction and ignite fans from regions he may have no voice in otherwise. Philadelphia has two sports radio stations, and neither one carries his show. And you don’t need to be Richard Deitsch to know there are very few people in Philadelphia tuning in to his show on television either. But the rant goes out on social media and generates a reaction there to give the social media interactions a jolt, even if that comes in part from one of the local teams responding to such a wild accusation.

It turns out Philadelphia is one of Cowherd’s usual go-tos when he needs to fill time. I have no clue what he was discussing at the time, but I seem to remember we’ve been down this road before with Cowherd.

So maybe we are dumb in Philadelphia, because how else would you explain getting all hot and bothered by some radio blowhard in a cushy Los Angeles studio who has to stoop so low to make the same tired lame jokes about whatever team he happens to set his sights on?

So go ahead and attack us from your radio studio and behind the TV cameras, Cowherd, because you can feel secure lobbing verbal jabs at a market with no interest in listening to your show, and you will not have the courage to come on a local sports radio show to defend your ridiculous comments. We can take it, because we’ve heard it all before. Your rant was nothing more than the recycled garbage that has been hurled our way far too many times over the years by voices more creative and unique than you anyway. We may have our faults, but at least one of them isn’t bowing to your ignorance and pompous jackassery of a clown show just because you are a national radio guy.

4 thoughts on “I am a Philadelphia sports fan, and Colin Cowherd is a misinformed idiot”