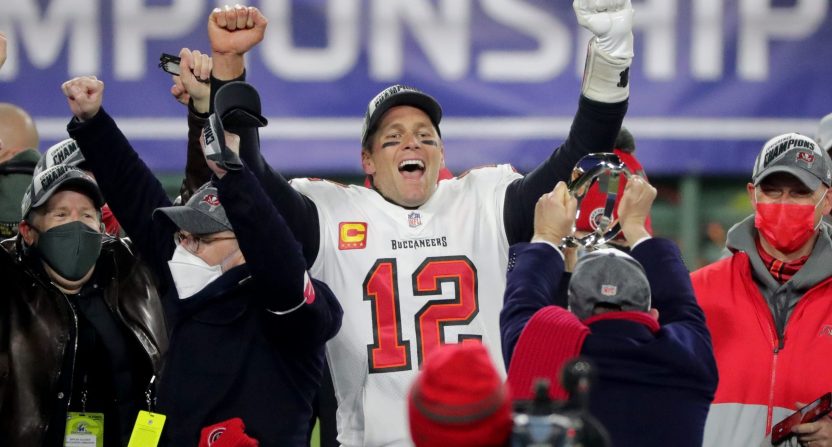 Tuesday, Fox announced that Brady will serve as the network’s lead NFL analyst alongside play-by-play voice Kevin Burkhardt whenever he officially retires.

Over the course of this long-term agreement, Tom will not only call our biggest NFL games with Kevin Burkhardt, but will also serve as an ambassador for us, particularly with respect to client and promotional initiatives.

Brady then chimed in to share in the announcement as well.

Excited, but a lot of unfinished business on the field with the @Buccaneers #LFG https://t.co/FwKlQp02Hi

Fox signed Brady to a monster deal, coming out to $375 million over 10 years. That seemingly completes the circle on the recent broadcaster chess moves that have generated massive contracts. To put that in real perspective, that’s more than Brady will make as an NFL player, making the decision pretty easy to understand.

Brady has been rumored for some time as a candidate to be an analyst for all the major football broadcast partners. It makes total sense that he would end up parlaying his playing career into a broadcasting one. However, no one expected the details of that move to come so soon.

Brady will be a great litmus test for Greg Gumbel’s theory that broadcasters don’t attract audiences. Fox certainly is paying Brady to do that, and bring a certain football acumen with him.

The news certainly sent shockwaves through the NFL world and there were some very strong reactions, from those who can’t understand why Fox would spend that kind of money on an unproven announcer and those who find the humor in Brady’s ongoing career escapades.

A needed deal for both sides: Everyone decides which NFL game they’re going to watch based on the announcers, and Tom Brady and his family badly need more money. https://t.co/yY9yFCw1Ms

Probably where the top of the market deals will be when Brady retires at age 52.. https://t.co/wFirSB1sLW

We (Fox) got Tom Brady! Wow!! Can't wait for the day he reports to work so I can sit him down and remind him what the "Tuck Rule" was in 2001. He seems to have forgotten! Sorry Charles. @tombradby

Took less money during his career to win more and make more money after his career. The legend we will never escape https://t.co/sTMzFmwvSd

this is SO stupid … im sure he will be fine but what a waste of money https://t.co/B9Opf2CSGU

Finally, Fox found a way to get people to watch NFL games. https://t.co/Yu113KD0jD

Of course, we don’t know if Brady plans to retire after this season or will continue sticking it out for as long as he can. The big question is…if the Buccaneers don’t make the Super Bowl, does Brady join the booth?