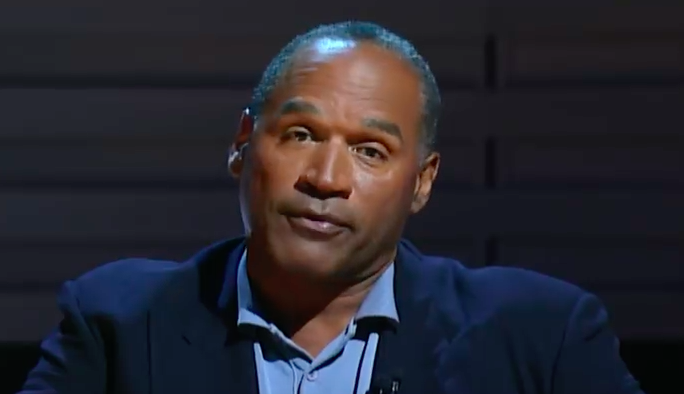 There have been a lot of bad decisions made when it comes to primetime American television. Like Cavemen, for instance. But Fox may be taking the prize for the worst, most insane broadcasting decision in television with what they’re about to do with noted criminal O.J. Simpson.

In 2006, Fox was planning to air a television interview with Simpson based on his planned book “If I Did It,” a disturbing work from Simpson that would “hypothetically” explore the killings of Nicole Brown Simpson and Ronald Goldman if he were indeed the one responsible for them. Fox planned a sit-down interview with Simpson to coincide with the book’s release. Here’s how Fox promoted the interview at the time:

“O.J. Simpson, in his own words, tells for the first time how he would have committed the murders if he were the one responsible for the crimes,” FOX said in a statement. “In the two-part event, Simpson describes how he would have carried out the murders he has vehemently denied committing for over a decade.”

Fortunately, people finally came to their senses and the rights of the book went to the Goldman family while the interview was never aired. Unfortunately, they’ve now apparently lost their minds again.

Twelve years after deciding it was too distasteful to make public, Fox has now reversed that decision. They will air Simpson’s interview on March 11th, the same night that ABC happens to be resurrecting the former Fox smash hit American Idol on its new network.

Here’s more about Fox’s decision to resurrect “If I Did It” from USA Today. Now it will air under the title of “O.J. Simpson: The Lost Confession?”

The interview was part of a campaign timed to publication of a ghost-written book, If I Did It, which featured Simpson offering a hypothetical description of how his ex-wife, Nicole Brown Simpson, and Ronald Brown were killed in 1994. Simpson was charged with the murders but eventually acquitted in what was called the “Trial of the Century.”

The interview, which was scheduled to run on Fox 12 years ago, was never broadcast because of a public backlash. And until it was recently “discovered,” the recording had been lost.

In the interview with publisher Judith Regan, “Simpson gives a shocking hypothetical account of the events that occurred on the night Nicole Brown Simpson and Ronald Goldman were brutally murdered,” according to the Fox announcement. “During their conversation, Simpson, in his own words, offers a detailed — and disturbing — description of what might have happened on that fateful night.”

Journalist Soledad O’Brien hosts the special, which will air with limited interruptions and feature public-service announcements about domestic violence. O’Brien will head a panel discussion to provide analysis and context.

Simpson was released from prison last fall after serving nine years for an armed robbery scheme. He has largely stayed out of public view since then, but this will bring his criminal record and the 1994 murders of Brown and Goldman back into the spotlight.

What exactly could have transpired in the last 12 years that suddenly makes this a good decision? It reeks of nothing more than a desperate ratings grab to combat Idol’s debut on a new network and does little more but give Simpson a platform that simply should not exist. Fox can air all the PSA’s they want, but it does not counter-balance giving airtime to someone meticulously detailing how he “theoretically” would have committed double murder.

There are no words to describe how insensitive, irrational, and irresponsible this decision is from Fox.