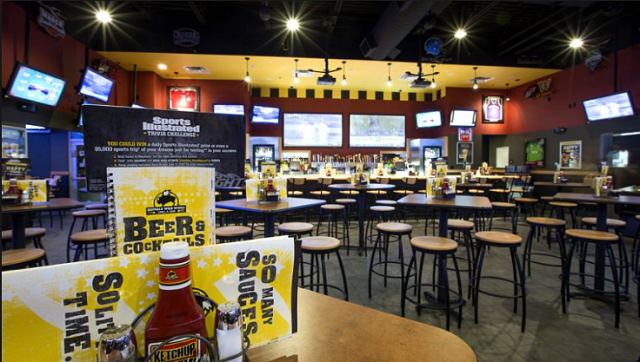 When the U.S. Supreme Court struck down a federal ban on sports gambling, we knew that the effect would be wide and varied. One thing we knew for sure was that if there was a way for companies to make money off of it, they were going to explore it.

You may know Buffalo Wild Wings as one of the many chain restaurants that millennials are killing. Considering anyone can just pull up their food delivery app and get all the chicken wings they need, there isn’t as much reason to actually go to the restaurant. So, the company has been looking for ways to get more young folks to show up again. It turns out that legalized sports betting might be just the thing.

The sports bar chain, of which there are 1,200 across all 50 states, told CNN Money last week that it’s considering allowing wagering on athletic events in their establishments in states where sports betting is now legal. Right now that would be New Jersey, Delaware, and Mississippi, though more states are likely to jump into the fray soon.

“As the largest sports bar in America, we believe Buffalo Wild Wings is uniquely positioned to leverage sports gaming to enhance the restaurant experience for our guests. We are actively exploring opportunities, including potential partners, as we evaluate the next steps for our brand,” a company spokesperson said.

It won’t be as easy as setting up a bookie at the bar during college football games. According to John Decree, head of North America equity for Union Gaming, each state is still working out all the rules and regulations. And because “it’ll be hard for them to try to get licensed in every state that allows it,” he expects BWW to partner with an established casino or gambling entity with its own licenses rather than explore getting ones for themselves in every state.

It’s also expected that states will likely enact some kind of requirement that calls for online wagering to be done via an account or special card rather than a personal credit card or bank account. That likely means BWW would have to create their own account system or partner with a company that had one.

It’s worth noting that Buffalo Wild Wings was purchased by Arby’s earlier this year and is now packaged as part of “Inspire Brands” along the Arby’s and R Taco. If BWW is able to make sports betting work well, we might just be able to gamble while grabbing a roast beef sandwich to go, too.