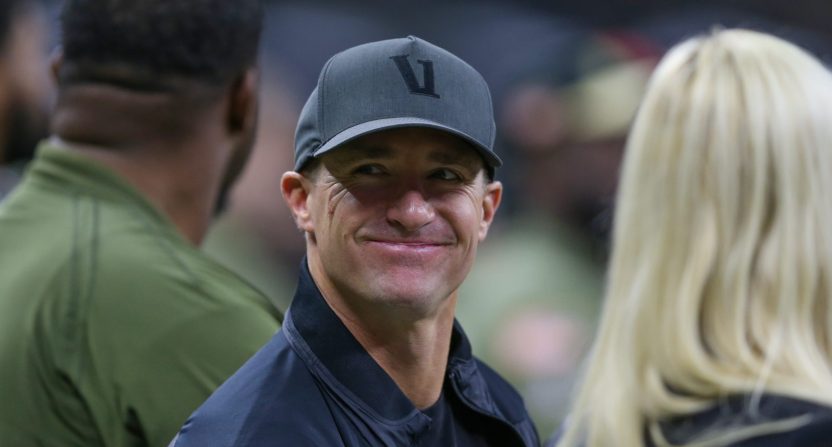 If you’re a New Jersey resident and you’d like to place a wager on the Citrus Bowl between the Purdue Boilermakers and LSU Tigers, you’re officially out of luck thanks to Drew Brees. Seriously.

New Jersey gaming regulators ordered sportsbooks to halt betting on the 2023 Citrus Bowl on Friday because “an individual associated with Purdue Football team” is in violation of state regulations. According to ESPN, that person is former Purdue quarterback and current interim assistant coach Drew Brees.

Per ESPN, the New Jersey Division of Gaming Enforcement (NJDGE) told the state’s sportsbooks to stop taking bets involving Purdue football and that any bets placed after Dec. 15 must be voided. That’s the date that it was announced that Brees would take on the new role with the Purdue football team.

The notice to sportsbooks did not name Brees but it said the individual was in violation of statute 5:12A-11 (f), which prohibits athletes, coaches, referees, or directors of a sports governing body from having “any ownership interest in, control of, or otherwise be employed by an operator.”

Brees is also a brand ambassador for PointsBet and has an equity stake in the sportsbook. PointsBet, which has a license in New Jersey, announced that it was ending that partnership a week after the Purdue announcement.

Brees had appeared in a viral video for PointsBet in early December to promote them. In the video, he faked being struck by lightning, something that was condemned afterward.

The point spread on the Citrus Bowl shifted from LSU -11.5 to LSU -14 over the last two weeks, for what it’s worth. The game is scheduled for January 2 in Orlando, Florida.