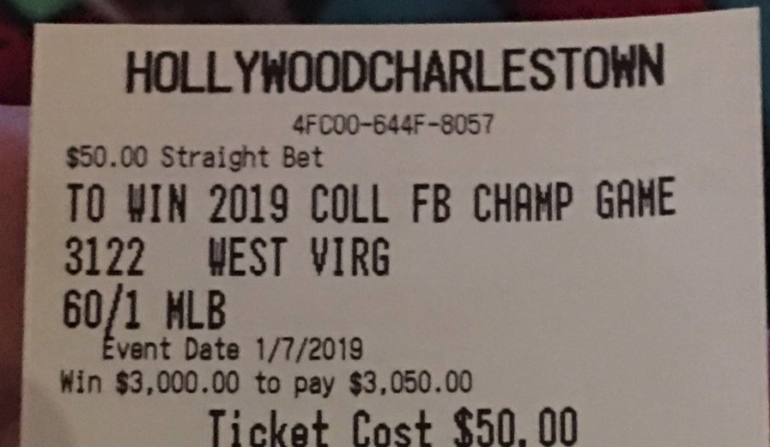 Guess what happened in WV today?! The first legal wager was made @HollywoodCCTR today!!! Sports wagering has officially launched in WV!!! pic.twitter.com/yPye4k5mPH

60-to-1 on West Virginia to win the 2019 National Championship game? That’s a bold bet, albeit it a very fitting one given the local interests.

Other bold ones came from New Jersey governor Phil Murphy, who made the first bet in that state’s history. He put $20 on Germany to win the World Cup (whoops) and $20 on the New Jersey Devils to win the 2019 Stanley Cup Finals. At 40-1, that’s pretty bold.

Delaware’s governor also made the first bet there when it became legal, though he put $10 on the Phillies to win a game rather than putting some money on the Delaware Blue Hens to win the FCS title. Go hang out in Philly if you love them so much, governor. (Note – Turns out, you can’t bet on Univ. of Delaware sports in Delaware, so we’ll give him a pass).

In Mississippi where sports wagering became legal earlier this month, a group of VIPs all simultaneously made the first bets in state history. State Rep. Richard Bennett is on record placing a parlay bet on the Braves to beat the Marlins and the Cubs to beat the Pirates. Yawn. No bet for Ole Miss or Mississippi State to win the SEC? Cold.

The next three states on the docket to approve sports wagering appear to be Pennsylvania, Rhode Island, and New York. We got to thinking, what would be the ideal first bet in those states? First, we need to establish the expectations:

Or, if you are an online bettor, make sure to check out 5Dimes sportsbook, the best in the business.

This is a tricky one because you don’t want to piss off one side of the state by putting all your eggs in one major market basket. So your best strategy is to parlay something from Pittsburgh and something from Philly, or at the very least make a bet for each of them. Betting on the Eagles to win the Super Bowl won’t yield you much so we think you go with the Sixers. Trust The Process and put down $50 on them to win the NBA Finals. Why the hell not? And while you’re at it, place $50 on the Pittsburgh Steelers to win the Super Bowl. If you really want to balance the state out, also throw some cash on Penn State to win the national championship. Extra points if that’s for college basketball.

First thing’s first, no bets on Boston teams. They’ve got plenty of things, they don’t need to steal your thunder, especially since they’re already stealing your AAA baseball team. The most obvious choice is to throw down $50 on the Providence Friars. Winning the national title is a bold move, but maybe you just pick them to win the Big East. That feels like a big bet that’s also possible, right? Feel free to throw the Rhode Island Rams some love as well. No reason you can’t do the same bet for them.

This is a tough one! Especially when you factor in that Governor Cuomo is almost certainly going to make sure he’s the one to make this bet in an election year. But it’s so easy to screw up. Place a bet for an NYC team and you remind the Upstate folks that they don’t matter as much. Place a bet for one college and you’re alienating so many other fanbases. Place a bet for one NFL, NBA, NHL, or MLB team and you’ve pissed off the rival team.

Our solution? $100 on the Buffalo Bills to win the Super Bowl. Yes, it’s far removed from Manhattan but this alleviates all the unwanted criticism of putting a bet down on the Yankees or Knicks over the Mets and Nets. You can always say that the Giants and Jets don’t actually play in New York, making the Bills the actual in-state team to support. It’s a fun pick because let’s face it, it’s not happening…but what if the Bills make a crazy run? Throw Western New York a bone and it’ll pay dividends, unlike that bet.

3 thoughts on “What is the ideal first legal sports bet in the states planning to allow sports wagering soon?”