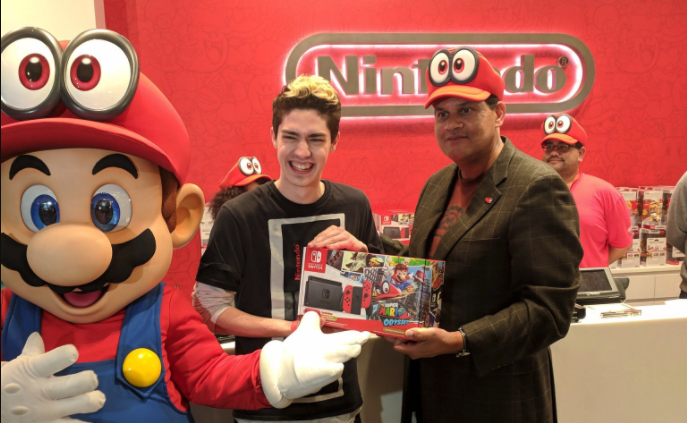 In the video-game industry, there are fanboys and there are obsessed fanatics. Then there is Alex Pekala, better known to his online followers as Captian Nintendo Dude. And we have to hand it to Alex, because he has lived up to the nickname he uses to certify himself as Nintendo’s No. 1 fan on the internet.

Being the first person in line for Super Mario Odyysey was no stroke of luck for Pekala. It was actually carefully planned and arranged by the Nintendo fan. Alex camped out across the street of the Nintendo retail store in New York City for the past 10 days to assure he would be the first person in line for the midnight launch of the new video game. And he’s been video blogging his entire experience on his Youtube channel.

Pekala is becoming an expert in camping out for Nintendo’s major launches. He is now 3-for-3 in his campouts in New York in 2017. Earlier this year, Pekala was the first person in line for the launch of the Nintendo Switch, making him the first owner of the first Switch officially sold in stores.

The first #NintendoSwitch has been sold at @NintendoNYC! We hope everyone has a great time playing! pic.twitter.com/CG3BuwFec6

Pekala camped out for 30 days in the same location to be first in line for the Switch. And just last month, Pekla was back in his familiar campsite across the street as he camped out for 10 days to be the first to get his hands on the Super NES Classic. I walked up to my local Walmart and waited in line for 15 minutes and got one. But it wasn’t the first one sold, so joke’s on me.

Some Hater Person Be Like: Why is @OfficialCND waiting for the SNES Classic Edition? That's such a waste of time.
CND and the squad be like: pic.twitter.com/8gG3aCqDsi

So, what is Captain Nintendo Dude going to be camping out for next? Considering the upcoming release schedule for Nintendo the rest of this year, it’s probably safe to assume CND is done for 2017, but 2018 could see him right back across the street in his signature folding chair with a new Metroid game potentially on the way. And then there is always the possibility of a Nintendo 64 Classic Edition coming our way. Considering how much fun he seems to be having camping out to be first in line at Nintendo’s store, it feels like a safe bet to say Captain Nintendo Dude will return in the future.

Super Mario Odyssey is already getting tremendous reviews, with some even suggesting this could be the best Super Mario game in the history of the storied franchise. If that is true, then the Nintendo Switch could be home to the best Mario and Zelda game (Legend of Zelda: Breath of the Wild is so good) in Nintendo history, taking over the title previously held by the Nintendo 64 for a generation.