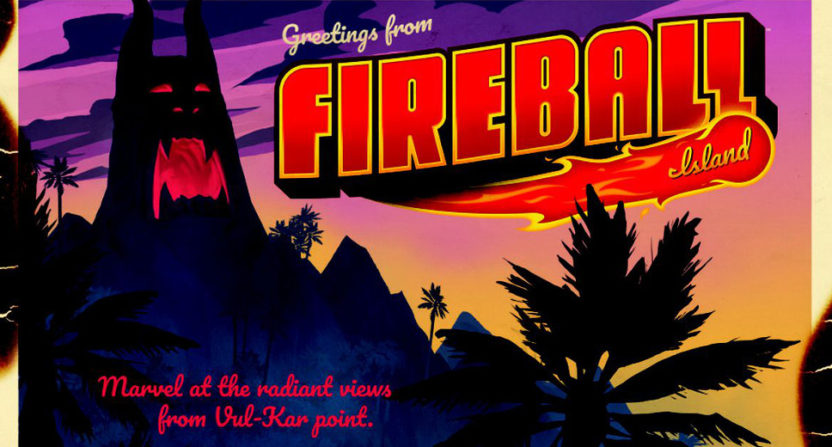 One of the most famed board games of the 80s was 1986’s Fireball Island, which featured explorers climbing around an island in quest of a giant ruby and facing fireballs (read: marbles) spit out by the central Vul-Kar figurine and volcanic vents across the board. Well, it’s making a comeback thanks to Restoration Games, a company spearheaded by attorney Justin Jacobson and famed game designer Rob Daviau (Pandemic Legacy, Risk Legacy, Seafall, Mountains of Madness, Betrayal at House on the Hill,  many more), and it’s found huge public success so far, hauling in close to $1 million U.S. on Kickstarter by Thursday morning. Here’s a look at the incredible island planned for the new version: 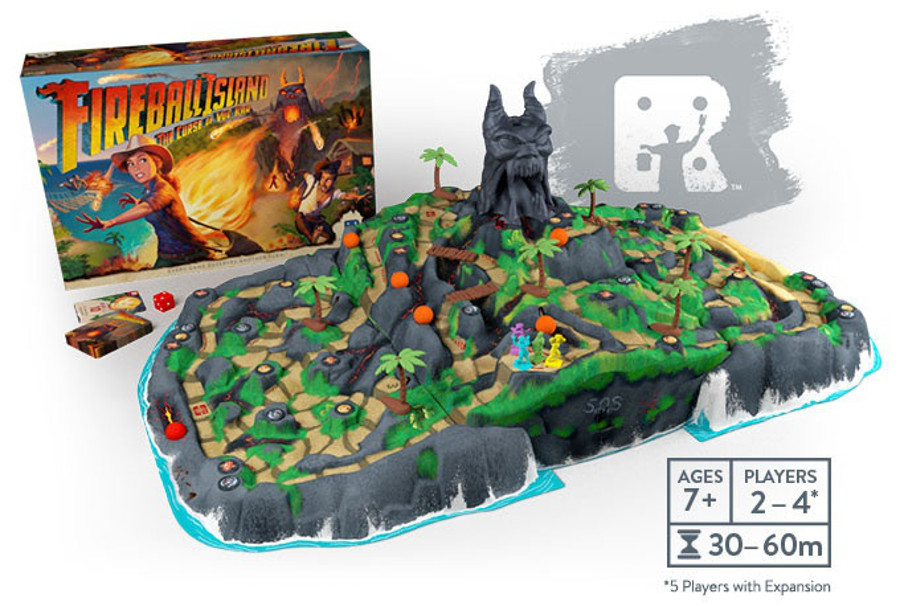 Restoration Games launched last year with a mission that “every game deserves another turn,” acquiring rights to classic games and bringing them back with beautiful production aesthetics and updated gameplay that’s a better fit for today’s hobby board game market. They started off with a Kickstarter launched last March for three games, Stop Thief! (based on the 1979 game of the same title minus exclamation point), Indulgence (based off 1930’s Barbu, 1966’s Coup d’Etat and 1981’s Dragonmaster) and Downforce (based off 1980’s Niki Lauda’s Formel 1, 1990’s Daytona 500 and 1996’s Top Race), and all three of those titles have brought in rave reviews. (I can personally vouch for the excellence of Downforce, but it, Indulgence and Stop Thief! have all received excellent reviews elsewhere too.)

Given both its popularity and the production challenges involved in making it work, Fireball Island is a quest on a whole different level. But in their January announcement of the title, Restoration’s Jacobson said their goal was always to “Be a year-two company in year one and a year-five company in year two.” And boy, does Fireball Island do that. It’s a title many hoped they’d one day bring back, as evidenced by it being the most popular submission on their suggestions form, but with the licensing and production challenges, few figured it would come this soon. They’re doing it, though, and the results look absolutely amazing; the Kickstarter video is a good sample of what they’re up to, and has some excellent humor about just what Ember Corp. has in store for visitors to the island:

So, what will be new in this new edition? Well, Restoration Games has been posting detailed designer diaries on their site, and the full rules are available for review as well, but one key change is summed up in Jacobson’s first designer diary. A key goal is giving players more control over their own movement (thanks to using movement cards instead of dice), but less control over where fireballs will wind up:

Once we had the basic structure of the island down, we had to look at the pathways. We wanted to provide more paths for both the players and the marbles to increase variety. We also wanted to vary the types of paths. Now there are split paths. So you can play the percentages, but you’re never certain which particular path a marble will take. Some areas aren’t paths at all, but rough terrain that sends the marbles down Plinko-style. And some areas include other marbles, precariously balanced, ready to cascade if bumped just so.

That was a nice start, but we wanted even more variation. So we came up with this idea for trees. These pieces slot into the island and have a little flipper that juts out into the path. By rotating the trees, players can have some control over which way a marble will roll, trying to guide it away from themselves or, better yet, toward one of their opponents. All while adding a great 3D look to the surface of the island.

Great. But we still weren’t satisfied. We kept looking for ways to add uncertainty. Then, we came up with an idea that just blew everyone away: What if Vul-Kar himself were devilishly sly about where he sent those fireballs flying? The team devised a design for Vul-Kar’s interior piece that splits the chute into three directions as it leaves his mouth. His imposing lower canines provide perfect dividers. Now there are three potential exit points for each marble that Vul-Kar spits out. There are five different paths that begin at the top of the island. You can turn Vul-Kar so he faces any particular set of three paths. When you drop a marble in, it will go down one of these three possibilities. But we didn’t want to leave the marbles to pure chance. The team spent weeks tweaking this interior design so the marbles most often exit the center path, while occasionally spitting out one of the side paths. While players can never be certain which path a marble will take, they can certainly “play the percentages”.

Here’s a look at those marbles in action:

This sounds awesome, and it should be an excellent step in making this more friendly for veteran gamers than the original version while still keeping it accessible to families. Oh, and the Kickstarter backer tiers help there too; the base game is available for $60 plus shipping ($15 to the U.S., $20 to Canada, the E.U. and Australia), but there’s also a tier available with all expansions for $130, which will incorporate everything from an Indiana Jones-style adventurer and snake marbles to a pirate ship to a tiger and bees.

All in all, this looks incredibly cool for hobby gamers, for those who remember the 80s game, and for anyone else interested by this premise. And it’s certainly gone over well so far, raising over $900,000 since its launch Tuesday. With 28 days still to go (the project ends on May 3), there’s a lot of potential for Fireball Island to become one of the largest board game projects ever on Kickstarter. The current record is Kingdom Death: Monster 1.5’s $12.39 million, and this might not get quite that high, but it definitely looks like it will bring in multiple millions. And that’s pretty neat. What’s old is new again, and Restoration Games looks to be doing a great job of bringing this classic back to life.