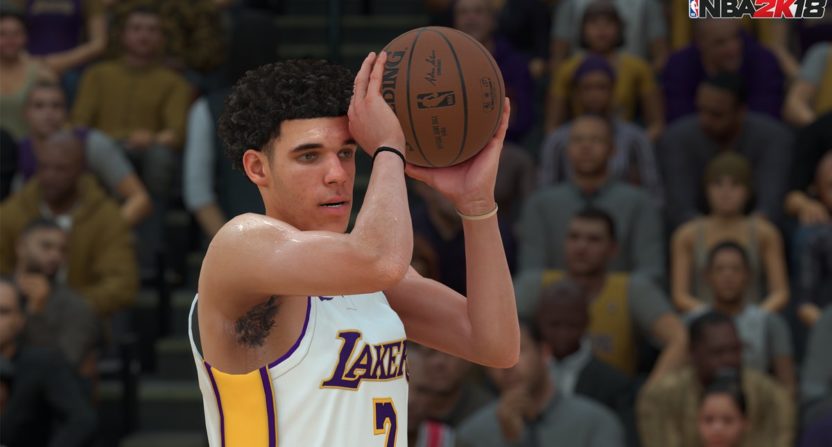 Sports video games continue to push the limits to make the game feel as authentic as possible. In recent years, that means developers have paid extra close attention to as many small details as possible to best represent the players they are including in the game. With NBA games, a little more time and effort goes into micromanaging every detail of a basketball player’s look from head to toe. Of course, that means making sure they get the shoes just right.

With NBA players having their own shoe deals, and a number having their own signature shoes, digitizing their signature looks is key to keeping the game as real as possible. This year, Lakers rookie Lonzo Ball will be the first to sport the Big Baller Brand on the court, and the developers at 2k Sports working on NBA 2k18 are making sure Ball’s own shoe is included among the digital footwear options from Nike and Adidas and so on.

2k Sports announced today, via their NBA 2k Twitter account, that the Big Baller Brand shoes will be available in the game this year, and Lonzo Ball’s digital recreation will be sporting them as well.

We're excited to announce the @bigballerbrand shoes will debut in #NBA2K18 & be laced up on @ZO2_ at NBA Season Tip-Off! pic.twitter.com/X4NcMS1aNH

You may recall that Ball’s signature shoe was initially listed at an incredible $495, which led to plenty of criticism. Fortunately, the shoes will cost considerably less for anyone who wants to use the shoes in the game.

The inclusion of the Big Baller Brand shoes in NBA 2k18 did not impress everybody though.

But 2K generics have always been there…

During the summer league, Lonzo made headlines by not having his signature shoe ready to wear and instead wearing different brands each game. Now, if you can change Lonzo’s shoes each time you load up the game, because big ballers wear what they want, that would be fun.