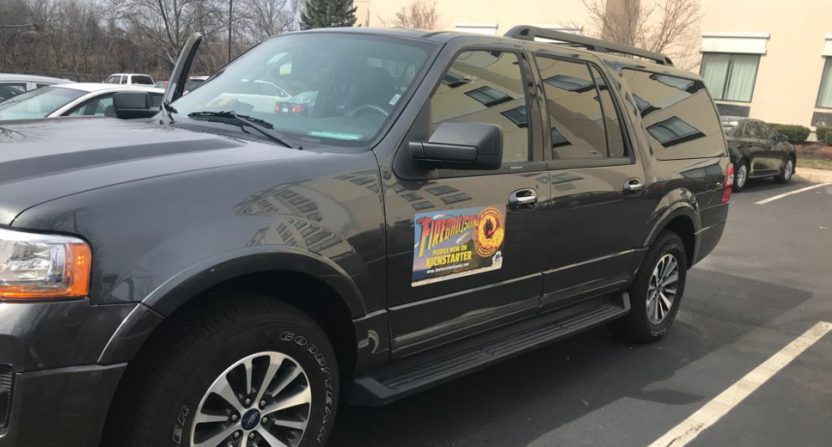 One of the biggest new tabletop gaming stories of 2018 has come from something old, and an unusual road trip has played a role there. Restoration Games’ update and revision of 1986 classic board game Fireball Island has raised over $2.3 million on Kickstarter so far (the Kickstarter ends Thursday night at 11:59 p.m. Eastern), and it’s been a success with both plenty of modern hobby gamers (boosted by revisions from the Restoration team, including famed designer Rob Daviau) and those who aren’t normally into today’s board games, but fondly remember the original or are curious about all the excitement.

Promoting a game like this comes with plenty of challenges, though, and one particular one has been that their prototype’s big enough and expensive enough that they couldn’t follow the more typical strategy of making a bunch of early copies and sending them to reviewers. Instead, Restoration tinkerer-in-chief J.R. Honeycutt decided to take a road trip with the prototype, driving across much of the eastern and parts of the southern U.S. in a “Embermobile” and demonstrating Fireball Island at game stores, game cafes and conventions along the way.

Honeycutt spoke to The Comeback from the road last month, and said that the reception has been incredible.

“It has been fantastic,” he said. “We had 35 people show up at Games Unlimited in Pittsburgh, which is a huge crowd for a board game. Often, you’re lucky to get three or four. And I was doing like, stand-up comedy, it was like being on an improv stage for three hours. It was nuts. And it’s been like that everywhere which is really nice. This road trip thing has really entered the zeitgeist of Kickstarter and board games.”

Honeycutt’s been a prominent gaming figure for a while, founding the Dallas-Fort Worth Nerd Nighters, running YouTube shows, working on some big titles for Level 99 Games, Artana Games, and now Restoration Games, plus designing some of his own games, including Fantasy Fantasy Baseball and Fantasy Fantasy Football (both with Daryl Andrews). But he said the Fireball Island project has stood out for the sheer amount of excitement around it.

“In terms of gaming stuff, this is the most hype I’ve ever seen for something I’ve worked on,” he said. “This is new and unique. It’s pretty cool.”

Restoration Games has become reasonably well-known amongst avid gamers thanks to the involvement of famed designer Rob Daviau (known for his work on Risk Legacy, Pandemic Legacy, and many more) and the success of their first three updates and revisions of older games, Downforce, Stop Thief! and Indulgence. But Honeycutt said the attention around Fireball Island has dramatically expanded their profile.

“We’re a second-time Kickstarter company that’s had three games, and we started the company last year. No one’s heard of us, no one outside the core even knows that we exist. I think, A. what a wonderful way to announce that we exist, Fireball Island, but B. we were on the front page of IGN, 10 million people saw that video, so people are starting to know who we are, which is nice.”

Honeycutt said the road trip was borne out of necessity, but it’s been a terrific experience.

“It’s been great, it’s been wonderful,” he said. “We only had one prototype the first three weeks we had the game. We couldn’t get reviews because we can’t ship this thing anywhere, and no one lives close enough to Rob to just come over and play it. The only way that we were going to be able to get anyone to play this thing was to take it to where they are, and that was the impetus for the road trip. And it’s worked out great.”

Honeycutt has been on the road since April 5 in Boston, and wraps the tour up in his home state of Texas with evenings at San Antonio’s Knight Watch Games Wednesday and Houston’s Coral Sword (the new gaming hub founded by Hunter and Alexis Pence) Thursday. Along the way, he’s made stops in 12 different states, as well as the Canadian province of Ontario. That’s a long haul, but Honeycutt said a road trip was an easy sell for him.

“I’m from Texas, I’m from Fort Worth, and I love to drive. I love to drive everywhere, I go to conventions, a day trip to Houston (around four hours away) is not a big deal, so this is fine.”

And he said it’s been particularly rewarding to see the response, and to see how many people across ages and genders have been interested in the game.

“One of the things that’s so exciting about this, and is also strange and wonderful, the response has been incredibly consistent across every demographic. Kids have loved it, older people have loved it. Men have loved it, women have loved it. It has been the same response from all players. And demographics is a big part of how I approach design, who the game is for. I’ve never had a game deliver even a little bit like this to that wide of an audience. It really is impressive.”

The Restoration Games version of Fireball Island has plenty of differences from the original, including shifting roll-and-move gameplay to a deck of cards, adding different paths to victory, and making the fireballs a bit less predictable. And they’re also offering expansions to vary the game more, including a pirate ship, a Last Adventurer module that brings up memories of Indiana Jones (complete with boulders and snakes), and the addition of bees and a tiger. Honeycutt said the expansions have been great to demo, as they add in some fun dexterity moments and opportunities for tricky shots.

“People love it so far,” he said. “It’s been wonderful. People really enjoy the dexterity elements. And the game is about kinetic chaos, and introducing anything that amplifies that is a positive that people enjoy. I have a little GoPro and I like to record whenever someone’s doing a boulder shot, or a tiger shot, or snakes, or whatever, because I just want to see how it goes. And it’s hilarious. Somebody was like “I’m going to get you with the tiger” and they didn’t know how to do it, they hit it way too soft, and it went like a millimeter. It was just hilarious, the table exploded in laughter. I’ve also got some video of people doing trick shots, like shooting a boulder off of a tree, up over [central idol] Vul-Kar and knocking someone over, just some absolutely insane stuff.”

This dude knocked over like everybody, including himself. #FireballIsland pic.twitter.com/R9CpBiYrEm

He said sometimes even the failures can be memorable, and flicking well isn’t essential to winning, which helps the game keep its appeal to a wider audience.

“It captures the essence of really good dexterity games because, I don’t want to call out any games individually but oftentimes if there is a critique of dexterity games, it’s that the game ultimately is just about dexterity and none of the rest of the mechanisms matter. It’s ‘Are you good at flicking stuff?’, or hitting stuff, or whatever. But I think in Fireball, the dexterity thematically comes in. You don’t feel like you’re flicking a boulder, you feel like you’re rolling a boulder towards Indiana Jones, and I think that distinction matters. And the dexterity is a fun and interesting but not necessary part of the overall experience, which isn’t necessarily dexterity-based. I think that nuance is important because even if you miss, it’s funny and it feels good. People laugh at their own misfortunes, which isn’t something you do when you’re playing a normal dexterity game, you’re just frustrated about it.”

Honeycutt said one of the trip’s highlights came near its start at Penny Arcade Expo (PAX) East, a giant convention in Boston.

“PAX East was awesome. It was the first time I’d demoed a product at PAX East, I’d been there as a panelist the last four years or so, but just seeing crowds who know it’s there coming and checking it out, and watching people just walk past and be drawn to it, like moths to a lamp. People are like ‘What’s all that fun happening? I want to know what that noise is!’ And then they’ll come and check it out. It’s just really, really cool.”

Honeycutt said another great part of the trip has been experiencing different game stores and cafes across the country, and seeing what makes each one unique.

The road trip wraps up Wednesday and Thursday in San Antonio and Houston respectively. Fireball Island’s Kickstarter ends Thursday night at 11:59 p.m. Eastern. Pledges are $60 for the base game and the unlocked Treasure Trove expansion or $130 for the game and another three additional expansions.