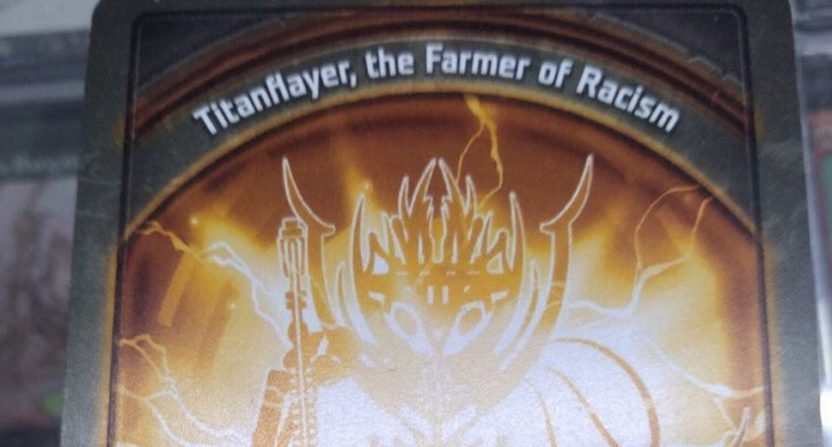 Much of the board and card game world has been buzzing lately around Fantasy Flight Games’ upcoming release Keyforge, and that’s probably not for the reasons the publisher had hoped for. Fantasy Flight is one of the largest hobby gaming publishers out there (especially when considered as part of parent corporation Asmodee, which also owns everything from Catan Studios to Days of Wonder to Z-Man Games), producing many of the Game of Thrones and Star Wars titles on the market, and Keyforge has been getting a lot of buzz thanks to both its design pedigree (it’s from Richard Garfield, who designed Magic: The Gathering, Android: Netrunner, King of Tokyo and much more) and its original conceit of unique, procedurally-generated decks for each player. But it’s that very procedural generation that’s now causing some problems, as seen in photos from pre-release events Saturday.

First, let’s explain what Keyforge is all about. In contrast to both collectible card games like Magic (where players buy sets of cards without knowing exactly what’s in the set) and living card games like Netrunner (where every copy of each expansion contains the same set of cards), Keyforge doesn’t involve deck construction; you’re not buying a larger set of cards and then turning some of those into a particular deck as per the game’s rules. Instead, it’s billed as “the world’s first unique deck game,” and you’re buying (for $10 U.S.) and running a unique, individual, already-complete deck. That significantly reduces the financial barrier to entry, and it also means that people aren’t just copying successful decks previously posted online.

But the game is still trying to provide the feel of ownership towards a particular deck, and it’s doing so with a new approach that sees each 36-card deck sold be both complete and unique. Some cards will be the same across decks, but procedural generation means that each deck will have its own unique makeup, and these decks are not modifiable after purchase (at least not for organized play; in unregulated casual play, as with all analog games, people can do whatever they want). The procedural generation component (which FFG says means there are 104 quadrillion possible decks) also extends to the name of each deck, though, and that’s where the issues have arisen.

The game is set on “the Crucible, an artificial world built from the pieces of countless planets,” where “two players step into the roles of mighty Archons, racing to forge keys that unlock the Crucible’s hidden Vaults.” Each of those Archons (unique to each deck) has a name, and FFG apparently procedurally generated those as well. That led to an unusual news post on Fantasy Flight’s website Friday; here’s the key part.

Archon names in KeyForge are procedurally generated by an algorithm that pulls from a list that includes tens of thousands of words. The result is that every Archon name (i.e. every deck name) generated by the algorithm is unique. Regrettably, some of the words that were included in the pool created the potential for defective Archon Decks with an unfortunate pairing of words.

We have taken corrective measures to adjust the naming algorithm for future decks, but a small percentage of decks including these words (less than 0.05% of the initial print run) have already reached the public. Instead of allowing these decks to persist in the KeyForge community, we have determined that the best course of action is to remove these decks from the play environment. Defective Archon Decks that we have flagged for removal will not be playable in any official KeyForge Organized Play events.

Okay, so, “an unfortunate pairing of words” could be anything, right? And when this post first came out Friday, much of the online discussion around it was that the names at issue were probably words that were reasonably innocent in their own right, but carried sexual connotations or something when combined. And the FFG response there seemed relatively reasonable; they were going to ban these decks from organized play (to avoid annoying anyone in that environment), but arrange for returns and offer two brand-new decks to those who returned them.

And people could always just keep the decks for causal play, or just thanks to their rarity, or sell them on to those who want them (as with anything collectible, misprints tend to be valuable). And if it was just sex jokes, that probably would have been the end of the story. But it turns out at least one of the decks in question appears much worse than that, as first posted on Reddit and then shared by many (including game designer/publisher Grant Rodiek) on Twitter:

This is better than I could have hoped. pic.twitter.com/iTBH2BbSLH

Okay, yeah, that’s not great. And there’s a whole lot of debate out there about the responsibility FFG bears for this. Blocking problematic content is a challenging task for computers, as shown in everything from the famed Scunthorpe problem to content issues on services like Twitter and Facebook, but many of the difficult cases come from where it’s a combination of words (as mentioned in one of the Reddit threads on this, online RPG Path of Exile wound up with an area called “Black Scum,” words that aren’t inherently bad alone but create issues together) or something contained inside a non-problematic word (like Scunthorpe).

It’s not clear why there would ever be a reason to include “racism” in a list of possible names, though. Maybe that comes from pulling the list from a larger dictionary or whitelist without fully filtering it, and not providing enough human oversight to conclude that a word like “racism” probably shouldn’t be used in this context. Or maybe there’s another explanation. At any rate, it’s not so great when products you’re putting out are carrying problematic names, and it’s perhaps even a bigger issue than with online games where people create troubling usernames, or with questionable license plates or whatever. There, it’s people actively trying to subvert the system; here, it’s the system itself creating the problem. In any case, however, FFG is already taking measures to address this, and other names that have come up so far are more funny than really bad:

We got dickjokes too, but they are also banned and being recalled. pic.twitter.com/PA1gRCuCGt

And some of this procedural generation has produced quite funny names:

There's been some attention for names gone wrong with the random generator for keyforge, but how about names gone oh so right?

The real villain here is the person burying the porridge in the first place. pic.twitter.com/ZAqwdVB650

Teaching a little KeyForge. I don’t mean to brag (I do, actually), but this is the best deck name in the game. pic.twitter.com/5g78A1Rfr9

(That one is “Rock, The Disconcertingly Arrogant,” for those who don’t want to click through.)

Went to the KeyForge pre-launch event at my local game store. Had a great time with a great game. It really is one of the best (if not the best) card game out there. If you're into card games and have a sense of humour you should check this out when it releases next week 🙂 pic.twitter.com/xMlb7TZ9qx

Took no photos at the #Keyforge prerelease because I was pretty occupied. Did get a pic of our Root game afterwards though.

Well if that isn’t a poignant name, idk what is. #Keyforge pic.twitter.com/RduGxxCRy8

All in all, this isn’t the biggest deal in the world, and it’s probably not going to diminish much from the long-term popularity of Keyforge. And it seems like FFG was smart to address this before these started popping up in the wild and present a solution for those who buy the now-banned decks. And hey, given the way markets tend to work, finding those will probably actually be quite a boon. Matt Morgan illustrated that nicely in this tweet:

Still, though, this is a definite warning about the limits of procedurally-generated names, and about the importance of human oversight. And it’s probably not what FFG wanted the Keyforge conversation to be about.