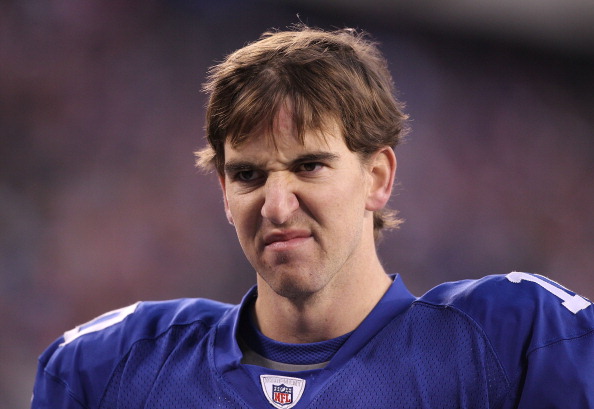 “In a time of deceit telling the truth is a revolutionary act.”
– George Orwell

In sports, the truth can be elusive. We think we know, but we rarely know the complete story. Athletes and coaches sometimes tell us half-truths and white lies, but sometimes provide complete fabrications.

These days, press conferences often have stenographers. Wouldn’t it be great if polygraphists were there too? Imagine how much more entertaining Nick Saban would be if he were hooked up to a lie detector.

We would like to know the truth from these five people in sports.

Question: Were you running a fake memorabilia scam?

Follow-up: If Bill Belichick were on fire and you had the lone extinguisher available, would you save him?

As far as conspiracies go, this is a doozy. Eli Manning and the New York Giants have been accused of knowingly trying to defraud collectors of game-worn gear. The suit alleges that Manning and the Giants distibuted memorabilia that wasn’t actually worn in a game. The New York Post reported that there’s a damning email from Manning:

“2 helmets that can pass as game used. That is it. Eli,” Manning wrote to equipment manager Joe Skiba from a BlackBerry on April 27, 2010, according to the documents.

Oops. There is more compelling evidence. A 2004 helmet bought by the memorabilia dealer in 2015 for $5,000 cash and two Michael Jordan rookie cards doesn’t appear to be from the 2004 season.

The lawsuit has been delayed indefinitely, but it seems strange that a wealthy Manning and a billion-dollar franchise would conspire for this type of fraud. Than again, a lot of shady things happen in the NFL.

Besides, there is just one Giants item worth top dollar:The  David Tyree helmet from one of the most amazing plays in sports history.

Follow-up: If the media were on fire and you had the lone extinguisher available, would you save it?

The most successful legal cartel in America is the NCAA. It spends a lot of money and it makes a lot of money. According to the latest figures, the NCAA spent $1.6 billion last year and president Mark Emmert made $1.9 million in total compensation in 2015. That’s a nice paycheck for running a non-profit.

The days of true amateur sports are long gone. Once the big money from television started rolling in two decades ago, college sports became a business. Major conferences, administrators and coaches were flush with cash. Everyone gets money except for the labor force.

Yes, scholarships have value but it’s not the same as actual dollars. If it were, coaches wouldn’t get cash bonuses. Instead, Roy Williams would get $1 million worth of free classes instead of the bonus he received for the Tar Heels winning the national championship.

Schools will often bellyache that there is no way they could afford to pay the players. That’s preposterous considering the wasteful spending, arms-race mentality in big-time college sports.

Question: Did you know there were hookers in the dorms?

Follow-up: If John Calipari were on fire and you had the lone extinguisher available, would you save him?

Rick Pitino is one of the smartest guys I know. I'm not buying it that he didn't know (about the scandal). – @JFeinsteinBooks on @espnVshow

The University of Louisville leads the nation in coaches with sex scandals. Football coach Bobby Petrino had the infamous motorcycle accident at Arkansas. Basketball coach Rick Pitino was the victim of an extortion plot after an affair. But the latest scandal is the most salacious and it could cost Louisville its 2013 championship banner.

Louisville is fighting the NCAA penalties. Pitino is fighting a 5-game suspension for failure to monitor. The NCAA is arguing that Pitino did not exercise sufficient oversight. A former staffer paid women for stripteases and sex with players and recruits.

Pitino supposedly took a lie detector test. The scandal has caused much embarrassment and people are wondering what Louisville’s coach knew and when did he know it.

This is what longtime columnist Rick Bozich wrote in 2015, when the scandal came to light:

“A coach who micromanages the percentage of body fat of every player was not aware that somebody was allegedly bringing women into the dormitory he built to honor the memory of his late brother-in-law?”

There’s a good chance we might never have all the answers to what exactly happened.

Question: Are you really going to leave the Cavs for the Lakers?

Follow-up: If Dan Gilbert were on fire and you had the lone fire extinguisher available, would you save him?

LaVar Ball on LeBron & if he’s a good fit w/ Lonzo Ball: “Let me tell you this, it would be a great fit, & LeBron is coming to LA” #Lakers

All signs seem to be pointing at a LeBron exit. He’ll become a free agent in the summer of 2018 and hasn’t publicly said that he’s returning. That would leave quite a legacy for Cleveland owner Dan Gilbert. He had arguably the greatest player in NBA history and managed to chase him off twice.

LeBron is a one-man dynasty. No matter where he goes, the team will be a contender. But why would he go to the Lakers? In the East, LeBron has reached the NBA Finals seven straight times (four with Miami and three with Cleveland). He has a puncher’s chance in that conference.

Well, LeBron has a house in L.A. He has other business interests, particularly in the entertainment world. From a non-sports point of view, it makes sense. On the court, assuming Paul George joins him, George would be the most complete teammate he has had since Dwyane Wade in his prime. If Lonzo Ball lives up to the hype, the Lakers team would be an interesting mix. But they would still be a fourth superstar short of challenging Golden State.

Follow -up: If Alex Rodriguez were on fire and you had the lone fire extinguisher available, would you save him?

The worst part is that the Red Sox got the watches from a Derek Jeter gift basket.

Derek Jeter’s greatest accomplishment is not his five championships or his 3,465 hit. His most amazing feat is playing his entire career in New York City – the tabloid mecca – without a public foible. By that measure, Jeter is an unprecedented celebrity. Everyone gets caught in some embarrassing snafu, no matter how small. Think about it. Jeter has been linked to beauties like Adriana Lima, Mariah Carey, Jordana Brewster, Jessica Alba, Scarlett Johansson, Jessica Biel, and Minka Kelly.

The biggest Jeter “scandal” involves gift baskets. In 2011, the New York Post unearthed this juicy nugget. It reported that Jeter would often give gift baskets of autographed memorabilia (a signed Derek Jeter baseball) to his one-night stands when they left. The funniest paragraph from the story:

“Yankees captain’s wham-bam-thank-you-ma’am kiss-offs came to light when he mistakenly pulled the stunt twice on the same woman — forgetting she had been an earlier conquest, a pal told The Post.”

Jeter has denied the story. Still, the details are so specific and weird, that it seems like it could absolutely be true.