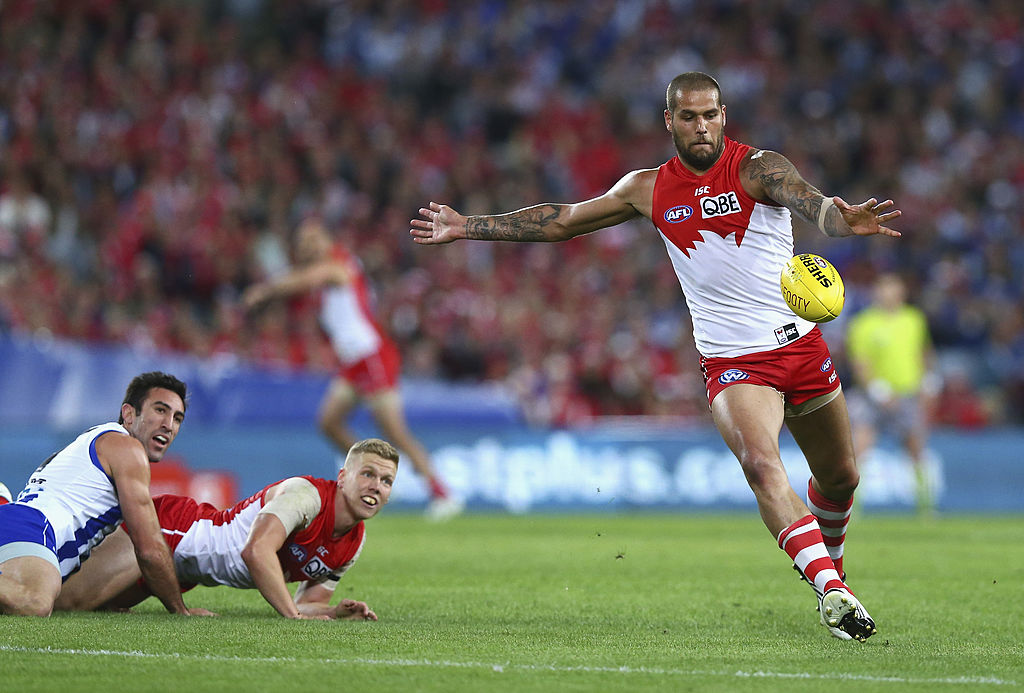 Tonight around midnight on the east coast the Western Bulldogs will face the Sydney Swans in the 2016 Australian Football League Grand Final – Australia’s equivalent of the Super Bowl. It promises to be a massive contest to end the AFL season.

I got hooked on the AFL more than a decade ago when games and highlight shows would regularly air on the old Fox Sports World alongside cricket, rugby, and other international sports. Before that, many Americans got a taste of the Australian game of football when it became a cult classic on ESPN back in the 1980s.

These days, FS1 and FS2 will air games in the wee hours of the morning throughout the season. Unfortunately you’ll need Fox Soccer Plus to watch tonight’s Grand Final in the USA. If you can find a way to watch, you certainly should. And even if you can’t, there are many reasons why you should be all-in on what is one of the most exciting sports on the planet.

First a quick primer on the AFL. You might have seen one of the goal umpires give the goal signal (even college football players were using it as a celebration in the Cal-Hawaii game played in Sydney earlier this year) and that’s the main target in the game. Kick it through the big sticks in the middle for a goal and earn six points, kick it through the smaller sticks on the side for a behind and one point. Players can pass the ball through a kick (which results in a mark for kicks over 15 meters) or a handball and have to touch the ball to the ground every 15 meters when running. Maybe the most thrilling aspect of the game are the marking contests, which allow players to use the opposition as launching pads for amazing marks.

The AFL combines the high flying that you might see in an NBA slam dunk contest with the exciting open field running and breaking tackles that you would expect in an American football game.

Some of the “party tricks” that the game’s best players can do with the ball are amazing. We’ve seen a few former AFL players come to the NFL to be punters and boom the ball 60 or 70 yards, but the accuracy and the movement players can put on kicks for goal are a sight to behold.

And when you combine those foot skills with the athleticism above, you get some spellbinding candidates for the best goal of the year.

The high flying of basketball, the open field running of football… and now we’ll throw in hockey style hitting for good measure. This hurts just to watch.

There can be some nasty collisions in Aussie Rules that can lead to some serious injuries because of the physicality and tough tackling in the sport. And when two players are flying towards one another at full speed in a marking contest, the bravery on display is much like a receiver crossing the middle of the field against an oncoming safety.

When the ball isn’t in play, the niggle doesn’t stop. Players are allowed to push, bump, and shove each other even between game action and it’s not uncommon to see the equivalent of a baseball bench clearing brawl with all the players on the field coming together to exchange pleasantries.

As someone who has worked for Awful Announcing for years, I’m always in tune to the announcers. The AFL has a ton of great and entertaining announcers who make the game just that much more exciting. Great marks are “hangers” or “speckys” and the announcers aren’t afraid to use a little humor as well. Some of the play by play announcers like Brian Taylor and Luke Darcy are former players as well, which adds a bit of a unique element that you don’t often see in American sports. Think of Gus Johnson with an Australian accent and that’s your typical AFL announcer.

Australian Football has a distinct personality that’s infectious as a fan, even if you’re an ocean away. Most of the superstars of the game have their own personal nicknames (the two biggest stars in the Grand Final are Sydney’s Lance “Buddy” Franklin and the Bulldogs’ Marcus Bontempelli – “The Bont.”) Then there’s “Wacky Wednesday” and the Grand Final Revue, which would probably give Roger Goodell a heart attack. The teams have their own fight songs like college football programs that are sung after every match. These songs range from old Australian tunes with lyrics for each club to Sydney’s use of the Notre Dame fight song. Really, have a listen!

And as for the Grand Final this weekend, it features a great underdog story in the Western Bulldogs, who hope to be the first team to ever finish 7th on the regular season ladder (the top eight make the finals) and win the premiership. Since joining the AFL in 1925, the Bulldogs have just one championship, which came in 1954. This is their first Grand Final appearance since 1961. It’s like the Lions or the Browns making the Super Bowl (as hard as that might be to imagine). The Dogs are even more of an underdog story because they’ve battled through injuries, losing their captain Robert Murphy to a season ending knee injury earlier this season and missing a number of other key players at various points this season. Their victory over Greater Western Sydney in last week’s prelim final was an instant classic.

They face a strong Sydney side who finished 2016 on the top of the regular season table and are in their third Grand Final in five years, but have had to bounce back after losing in the first week of the finals. When the two sides met earlier this season, the Dogs beat Sydney thanks to a last minute goal from star halfback Jason Johannisen.

The Bulldogs-Swans clash will be a fantastic end to a fantastic season in what should definitely be your new favorite sport.