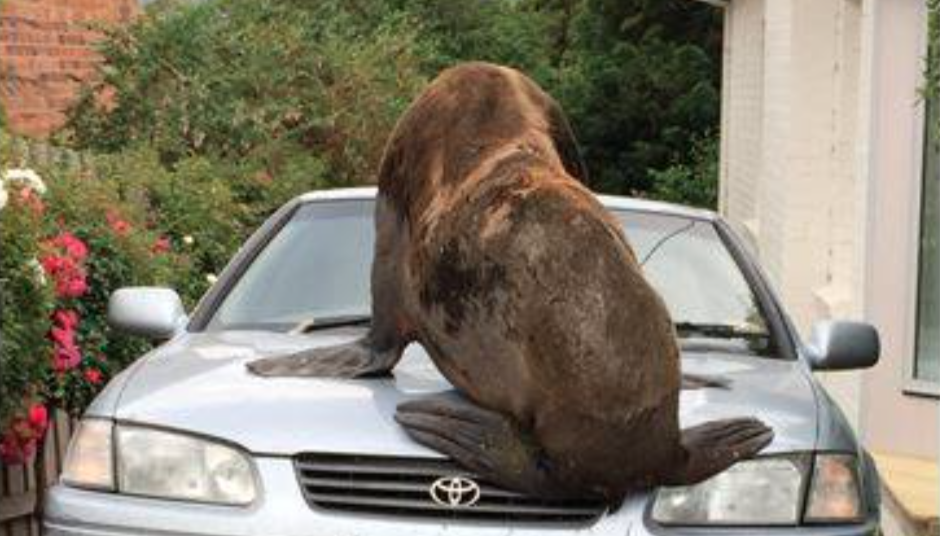 An Australian family found a very peculiar holiday surprise on the hood of their Toyota. A seal weighing an estimated 440 pounds clambered onto the family car and made himself into very unique hood ornament before taking a stroll down the suburban neighborhood block.

The incident occurred in the Australian island state of Tasmania, where it is not uncommon for a sea creature or two to come ashore and pay a visit to the land dwellers — just not typically this far inland.

The Australian fur seal is quite common to Tasmania, but they tend to stick to beaches and avoid the suburbs for the most part. However, a wildlife expert said all of that goes out the window when it comes to mating season.

“At this time of year, it’s not unusual for us to locate fur seals in rather strange locations,” she said. “Most of the breeding colonies are up in Bass Strait … so at this time of the year, all the seals are sort of congregating up in that neck of the woods.

“There’s all sorts of hormones and things on the go that often lead to males roaming around in strange places.”

“In the past we’ve found seals in a range of unusual locations from paddocks to car parks to even last year we had to retrieve one from a toilet block in a cemetery.”

This particular seal stuck around long enough to even earn a nickname, “Lou-Seal.” He caused a few thousand dollars worth of property damage while he was there, but as far as the seal is concerned, this story has a happy ending. Lou-Seal was tranquilized and peacefully removed from the area by local parks and wildlife staff.

Launceston seal, dubbed Lou-Seal being moved from suburban driveway into a trailer pic.twitter.com/ssXGIfATFQ