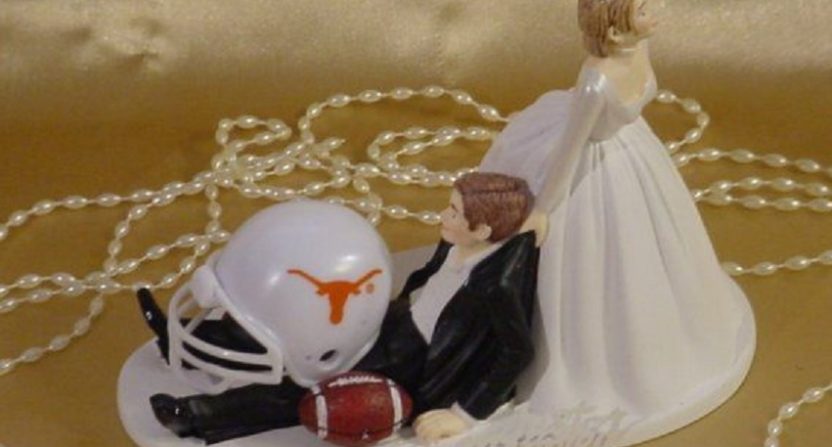 Sometimes, I can’t believe I’m in a position to defend things that I generally don’t care about. But sometimes, college football fans are just… beyond.

No one gives a shit that you don’t want to attend fall weddings. Your argument is boneheaded and flawed. Come talk to me when you pull your knuckles off the ground.

@redditcfb started off my need to defend fall weddings with this tweet and then a series, using a play on wedding invites to express their loathing of the tradition. To which I say: shut up.

It's the most wonderful season of the year… but not for some. #StopFallWeddings pic.twitter.com/mIyBZSxaSs

The decision to get married, to commingle your finances and be utterly responsible for another person for the rest of your life, is a BIG DEAL. And planning a wedding is… well, it was for sure not one of my fonder life events. It is a lot of stress. Even for blissed-out brides and grooms who think it’s the MOST IMPORTANT DAY IN OUR LIFE EVVVVVEERR (it’s not), it is a lot.

Someone asks to bring the stoner they’ve been dating for five minutes as a plus one and you’re too weak to argue they weren’t invited with a plus one. You spend hours picking out invitations. Your bridesmaids can’t do anything without their hands being held. It’s… draining. You do all that and then someone wants to complain about the date? I would end them. And be justified.

If in all that stress and planning and commitment-making, this couple should land on a fall Saturday as a day to offer to ply you with FREE food and booze and celebrate their love and that they’ve deigned to be friends with you, you can show up, drink the free booze and eat the free food, dance, check the score on your phone, and go home and then send them a gift off their registry.

No, watching it on DVR later is _not_ the same… #StopFallWeddings pic.twitter.com/xClUK5FziO

I don’t know why this “No Fall Weddings” edict has become so pervasive in college football fandom, but it needs to stop. Could you imagine if this extended to other sports? “No April weddings! It’s NBA playoffs!” “No October weddings! It’s MLB playoffs!” “You’re gonna get married in the middle of the Stanley Cup!? I’m not coming!” You sound absurd. And childish. Don’t be either of those things.

Here’s the thing: these lifelong commitments and the day the couple have been planning for probably about a year is going to happen once. Maybe twice. Maaaybbee three times. But a conference matchup is going to happen every year. Every. Year. Sure, there’s a chance you miss a kick six. There’s a better chance you see Wake Forest and Virginia Tech try very hard not to score on each other. There’s an even better chance you see a cupcake versus your alma mater in a game that simply does not matter. You are, in all likelihood, not missing a marquee nighttime matchup to watch your friends’ nuptials. In lots of cases, you aren’t even missing the game. 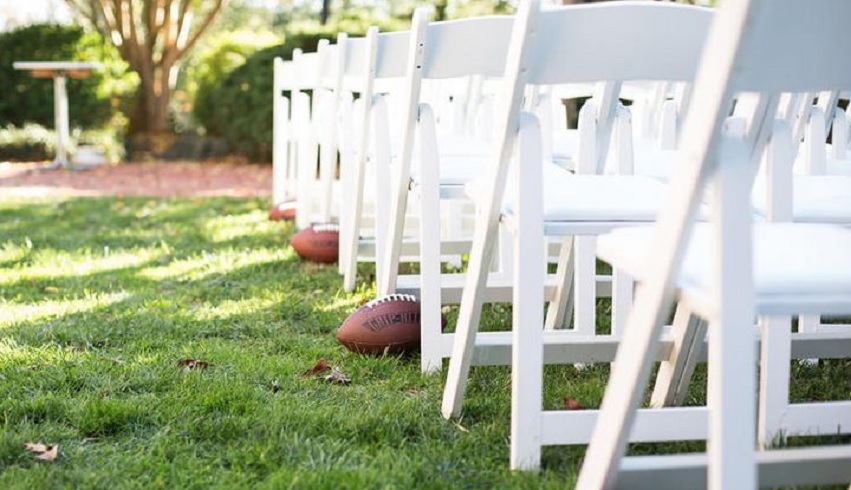 But even if it does mean missing the game, are you comfortable giving up hanging out with friends you haven’t seen in years, with groups of people you love, because you would rather be in the stands? That’s truly your call. But I think you’re wrong. And if you harp on it to the couple, I, as mentioned above, will personally hunt you down and harm you because I *know* they have enough going on without your lowest common denominator bro comment.

You also sound like a backwoods yokel with all your harping on “NO FALL WEDDINGS!” You have clearly never left your bible/rust belt town and experienced the world at large. Because no one outside of those areas gives one damn about your utter and complete devotion to college football.

I live this every year as a California native devoted to an SEC team. No. One. Cares. My friends have come to love and partake in my football fandom because they love me, but otherwise? They don’t care. This whole STATE doesn’t care. (Yes, I see you, five devoted USC fans. But we’re speaking generally. No one in Barstow or Bakersfield or even Fresno, where there IS a D1 team, cares.)

If you said to anyone on the West Coast, “Sorry, can’t make your wedding, my team plays that day,” they’d look at you like you had five heads. An excuse of “Sorry, my dog is going to the groomer and my improv troupe is performing that night” would actually be way more legitimate in these parts.

And not only that, fall weddings are beautiful! The weather is damn near perfect. There’s that crispness to the air, you can decorate with fall fruits and put out plaid blankets. You can serve soup appetizers without that being the dumbest. You can incorporate rusts and coppers and oranges into your planning and not do basic bitch blushes like a summer wedding. Celebrate their love! And their choice not to have you sweltering in a suit in July! THAT’S the real scourge!

There is a caveat here: know your audience. If a bride and groom are from Alabama and pick the last Saturday in November, well, they can’t be surprised that they aren’t getting unfettered attention at their wedding. *Try* to stay away from big rivalry weekends if you’re in a big rivalry town. (Here are five fall weekends during college football season which Ty Duffy suggested avoiding.) But you aren’t going to be able to please everyone. Even if most of your friends are Nebraska alums and you pick the Nebraska bye week, some knucklehead Iowa cousin is going to complain how it’s not *their* bye week. You gotta do what’s right for you, silly idiots entering into a lifetime commitment to each other.

And if you’re invited to a beautiful fall wedding, decline like a grown-up because you’ve decided football is more important to you than these friendships, or show up and be present for this couple. But whatever you do, do it quietly.