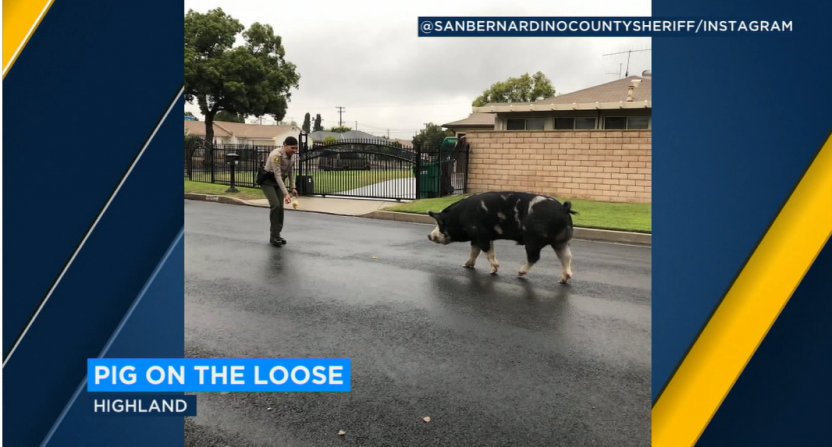 A pig that looks like a creation out of Jurassic Park was seen strolling around a Highland, CA neighborhood on Sunday.

According to ABC 7, local residents called San Bernardino County police to report an enormous pig in the streets, and referred to it as “the size of a mini-horse.”

Deputies from the Highland station say residents called to report a pig the size of a mini-horse running around a neighborhood.

Yeah, a mini-horse is a pretty fair assessment. Look at this friggin’ thing:

Maybe the best part: the police used Doritos to lure the pig out of the neighborhood.

Well if this doesn’t go on the list of unusual calls… 🐖 Highland Station received a call reference a pig “the size of a mini horse” 🐷🐴 running around the neighborhood. Deputy Ponce and Deputy Berg found him and due to previous calls, knew where he lived. They lured him back home with @Doritos one of our deputies had in her lunch bag 😋. They made a trail and he followed. “We were able to put him back in and secure the gate. It was fun!” said Deputy Ponce. Crime fighting to safely securing a mini horse sized pig, we do it all 🤷‍♀️🤷‍♂️

A post shared by San Bernardino County Sheriff (@sanbernardinocountysheriff) on Oct 14, 2018 at 10:07am PDT

The Doritos — of course — got the job done, and the pig was returned to his gate.