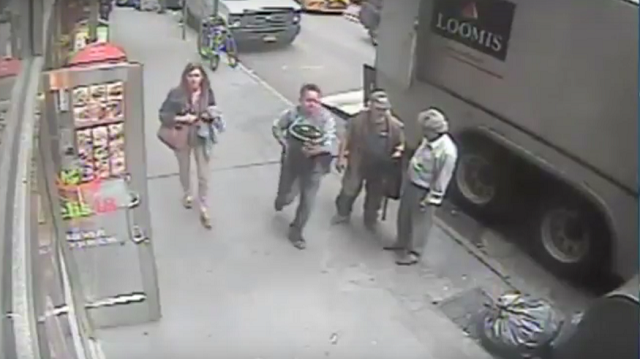 Generally, I don’t pull for criminals. The world isn’t a movie, and if people are willing to break the law, that’s not really a good thing.

But sometimes, the crime itself is so brazen, foolhardy, and not violent or harmful, that you kind of just want to see the perp get away with it. This is probably one of those times, because the site of a man stealing a bucket of gold flakes in New York City in broad daylight then struggling to carry it down the street was almost heartwarming.

Here’s the original video, if you need a refresher, since it happened all the way back in November (!):

Imagine the thought process there. Still, whatever planning (or lack thereof) went into the attempt, he’d certainly nailed the getaway, managing to escape the country without capture.

But his time on the run (which I like to imagine he spent lugging the gold around for comedic effect) came to an end Wednesday, as authorities reportedly took him into custody without incident in his native country of Ecuador.

Authorities had been looking for Julio Nivelo since he was allegedly captured on surveillance video swiping the 86-pound bucket of gold off a truck on West 48th Street in September.

The hunt led police to Nivelo’s residence in West New York, New Jersey, to Orlando, to Los Angeles before detectives from the major case squad headed to Ecuador. Nivelo was arrested there Thursday morning by federal agents with Homeland Security Investigations and The National Police of Ecuador.

He was arrested without incident after he sent the NYPD on a months-long search across the globe. It wasn’t known when he would be extradited to New York to face charges. Police say they have recovered some of the money.

Okay, so making it all the way back to Ecuador is pretty impressive, as he probably would have had to convert some of those flakes into currency. But still, the man had a half-world head start, and he ended up captured.

Here’s a bit of advice to anyone who finds themselves in a similar situation: take to the sea! International waters are basically lawless. You buy yourself a yacht, you sail into the Pacific, visit various ports, maybe swing a private island somewhere.

It worked for pirates.

Someone please try this and let me know how it works. For, uh, research purposes.

(Disclaimer: The Comeback does not endorse criminal acts of piracy as a matter of editorial policy.)