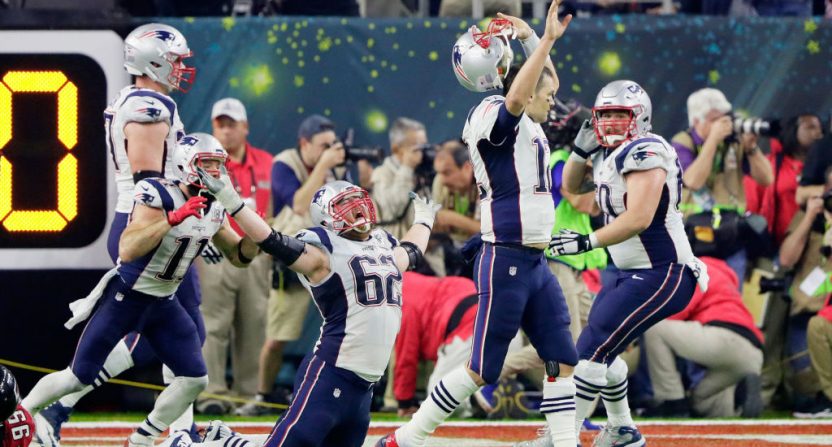 The New England Patriots’ historic comeback victory over the Falcons in Super Bowl LI continued a historic stretch of amazing championship games the likes of which we’ve never seen before.

A 25-point comeback isn’t just a special event in Super Bowl or postseason history, it’s one of the Top 10 comebacks in the entire history of the NFL. And for it to happen for a team fulfilling its destiny as the greatest modern-day dynasty in NFL history? It’s a championship event the NFL could hardly dream of… minus the whole Roger Goodell DeflateGate revenge thing.

Amazingly though, Super Bowl LI was just par for the course when it comes to great and historic championship events over the next 12 months. While this is a totally subjective judgment call that’s totally susceptible to being a prisoner of the moment, this is the most incredible stretch of championship events ever. We’ve seen buzzer beaters, overtime games, the most famous droughts in sports end, historic collapses, photo finishes and everything in between. At least in the three decades I’ve been on planet earth, I can never remember anything like this.

Let’s look at the last 12 months and just how incredibly #blessed we’ve been as sports fans.

April 2016 – Kris Jenkins hits a buzzer beater to give Villanova their second NCAA Championship in a thrilling title game against North Carolina.

April 2016 – Looking for back-to-back Masters triumphs, Jordan Spieth inexplicably drops a 5 shot lead in the Final Round of The Masters, including a 7 on the famed Par 3 12th hole, sending 2 balls into Rae’s Creek. Danny Willett goes on to wear the Green Jacket.

May 2016 – 5000-1 underdogs Leicester City win the English Premier League in one of the greatest underdog stories of all-time.

June 2016 – The Cavaliers become the first team to overcome a 3-1 deficit in the history of the NBA Finals, winning Game 7 on the road against the Warriors, who just put up the greatest regular season in NBA history. The Cavs end Cleveland’s 50+ year drought without a professional sports championship.

July 2016 – Henrik Stenson becomes the second golfer to win a major by shooting a 63 in the Final Round, beating Phil Mickelson in one of the great head-to-head duels the sport has ever seen.

August 2016 – While there wasn’t necessarily a pulse-stoppping finish in any one race, we got to see Michael Phelps and Usain Bolt compete in one last Olympics and add to their historic medal counts as two of the most accomplished athletes ever.

October 2016 – The Sparks beat the Lynx in the deciding fifth game of the WNBA Finals, scoring the game-winner with just three seconds remaining.

November 2016 – The Chicago Cubs end the most infamous championship drought in sports, overcoming a 3-1 deficit of their own against the Cleveland Indians. They win Game 7 on the road in extra innings in what may be the greatest, most dramatic game of baseball ever played.

January 2017 – Clemson beats Alabama in their National Championship Game rematch by scoring a touchdown with just one second left on the clock.

February 2017 – The Patriots pull off one of the great comebacks in NFL history, reversing a 28-3 deficit against the Falcons, and winning the first Super Bowl to ever go into overtime.

There you have it. If there’s been a better 12-month stretch for sports fans, I’d love to know what it is.