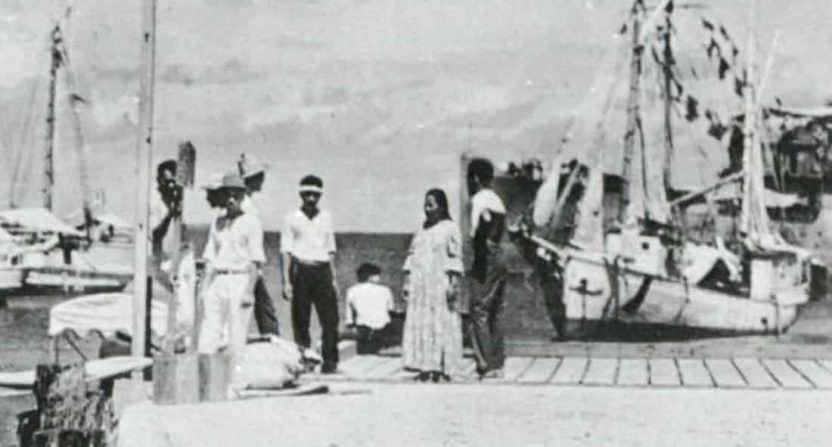 The History Channel recently aired a documentary arguing that a photograph (above) from 1937 shows Amelia Earhart survived her crash-landing in the Pacific Ocean and was taken prisoner by the Japanese. The only problem is a Japanese history blogger named Kota Yamano has already debunked the theory. It took him only 30 minutes to find out the photo was apparently published two years before Earhart left on her attempted around-the-world flight.

The History Channel found the photograph in the US national archives and claimed the woman sitting on the dock resembled Earhart. Yamano dug up the same photo in Japan’s national library and discovered it was from a 1935 travelogue.

Here’s what Yamano told the Guardian about his findings:

“I have never believed the theory that Earhart was captured by the Japanese military, so I decided to find out for myself,” Yamano told the Guardian. “I was sure that the same photo must be on record in Japan.”

Yamano ran an online search using the keyword “Jaluit atoll” and a decade-long timeframe starting in 1930.

“The photo was the 10th item that came up,” he said. “I was really happy when I saw it. I find it strange that the documentary makers didn’t confirm the date of the photograph or the publication in which it originally appeared. That’s the first thing they should have done.”

So, no one from the History Channel thought verifying the photo’s date might be a good idea? (Or, more cynically, they did and just hoped no one else would be able to?)

Yamano was not the only skeptical party when the documentary came out. Smithsonian curator Dorothy Cochrane felt the image was too blurry to use as definitive evidence, and Earhart historian Ric Gillespie found several red flags in identifying the photo’s subjects as Earhart and her navigator Fred Noonan.

The History Channel released the following statement in light of Yamano’s research, via the Washington Post:

“HISTORY has a team of investigators exploring the latest developments about Amelia Earhart and we will be transparent in our findings,” the statement read. “Ultimately, historical accuracy is most important to us and our viewers.”

Clearly historical accuracy is important to the viewers. The “us” part? That’s less clear right now.