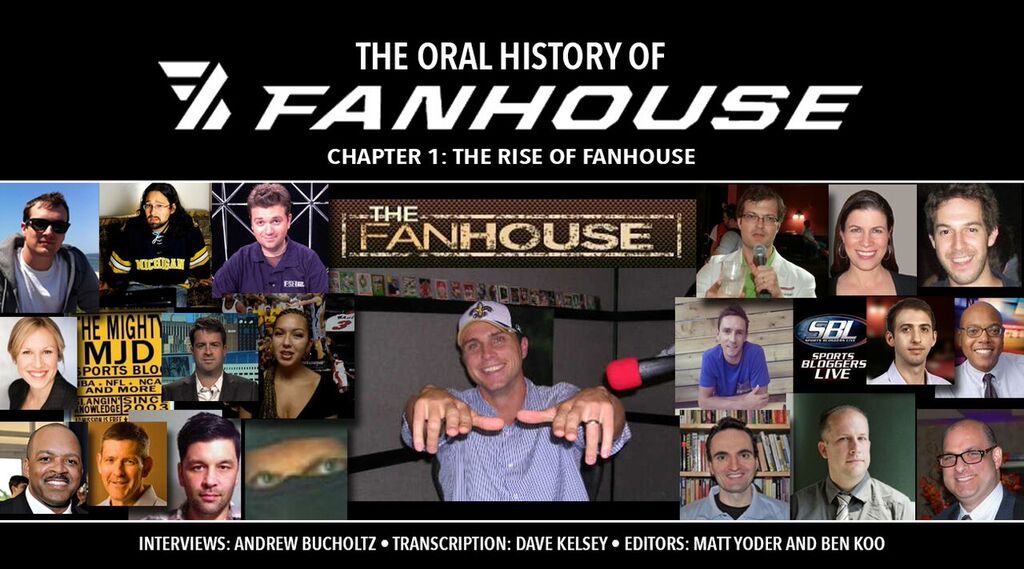 In less than a year from the initial idea for an AOL “network of college football team sites” in the late spring of 2006, FanHouse had quickly grown into a powerhouse. Following a summer of planning and recruitment, the site launched with over 75 team-specific blogs and 90 bloggers providing college football and NFL content on August 28, 2006. It quickly expanded to other sports, including the NBA, MLB, the NHL and MMA. It started drawing substantial traffic and turned heads inside AOL for its ability to bring in non-AOL users, a stark contrast from the company’s other content properties. It also drew attention across the web as a site written for sports fans by sports fans.

Greg Wyshynski, NHL blogger, FanHouse: There was a certain voice of the fan aspect of FanHouse, well, obviously from the fucking name, that really sort of resonated with me and made me think “Oh, okay, so on top of being one of the few American guys writing hockey, now I feel like I have this responsibility to continue to write these types of stories that American fans like me care about, because they are not necessarily getting that same coverage from mainstream, Canadian sources or the few mainstream American sources that pumped out hockey writing.” So I think I learned a little bit more about what the online fan culture and what the online sports consumer actually was. 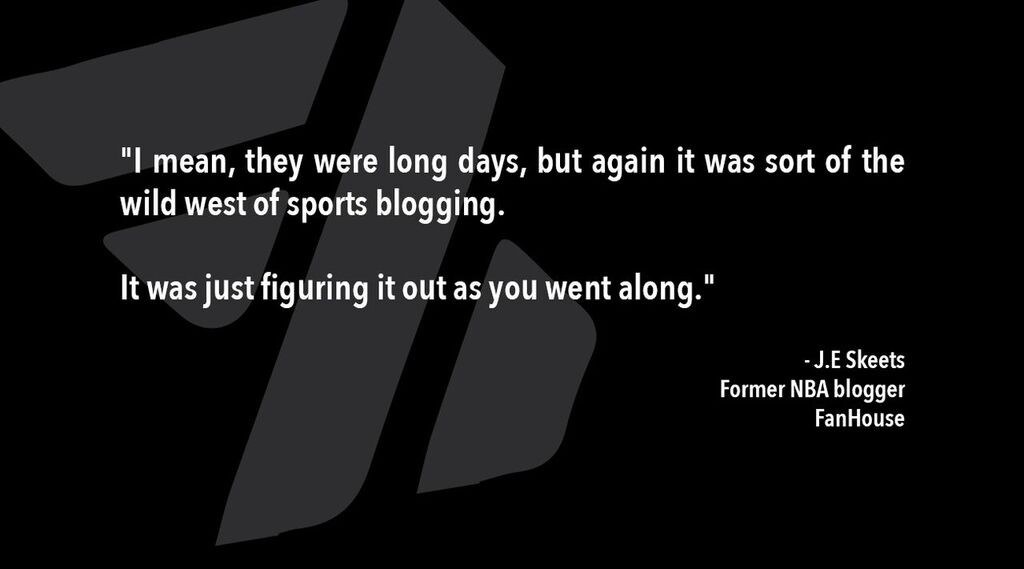 Neal Scarbrough, general manager/editor-in-chief, AOL Sports: I remember a couple of controversial typical AOL stories; I think maybe one was about Brady. We had a couple of our own stories that did 250,000-300,000 pageviews in the first day that the stories were launched and Jamie and I said “This is great stuff, people are actually putting credible information into this blog platform and other people are finding it and sending it back out to our audience.” Obviously, our pageviews eventually became a mountain. We learned early on that our guys could compete with traditional media. That was all we needed to know for selling their stories as the face of AOL Sports.

John Ness, senior producer, AOL, then executive producer, FanHouse: It felt like something of a petri dish that was doing a good job of growing on its own. So in hindsight, I realized that we had the tremendous benefits of being given this blog scheme to work on and having the free range to go and find stories that it turned out the AOL audience wanted. But it felt like there was a lot of benign neglect and everyone was really happy when things worked out well.

Tom Mantzouranis, Saints blogger, FanHouse, then editor, FanHouse: That first year was very kind of, I don’t want to say no rules, there were a couple of rules. It was a very loose structure and I think it was something on Jamie’s part and they were trying to figure things out as much as we were. There were people that were slightly more experienced than others, but no one that was really a seasoned writer. So it was haphazard, but in the most charming way possible.

John Ness: That was one of the miracles at the time, and I don’t know who cleared the roads bureaucratically for that to happen, but having had more senior roles since then, I know that someone had to tell the lawyers to not worry about the fact that we were letting people that weren’t employed at the company write whatever they wanted to. And I don’t think we would have had nearly the success we had if bloggers didn’t feel like they were doing what they wanted to, same as they were doing on their own sites.

J.E. Skeets, NBA blogger, FanHouse: I mean, they were long days, but again, it was sort of the wild west of sports blogging. It was just figuring it out as you went along. Guys pitching ideas, certain series, or Jamie looking ahead into the future, photo slideshows and stuff like that. It was sort of free reign, whatever you think is interesting, whatever you think people would click on.

MJD, NFL blogger, FanHouse: There was a time when I had zero free time. I was emailing, going to school, working, doing FanHouse in the evenings and weekends and Deadspin on the weekends. Yeah, there was a time when it was just murderous for a while. It didn’t seem like it at the time, until the end when it started to wear me down, but at the time it was all pretty exciting since I was just a dude that started a blog because I could. There was no vision or plan or anything and it just sort of snowballed into actual work.

Greg Wyshynski: I jumped in with both feet because I loved the form of media that we were dabbling in and I loved being able to do one of the few things that I do well. Turn it around so quickly and make it interesting, and then obviously the other carrot was the more you blog, the more you got paid. The AOL FanHouse slave wage model.

Pat Lackey, MLB blogger, FanHouse: The longer I wrote there, the more I was comfortable with what they were interested in. So I did a lot of stuff that was pretty far out. I helped out a lot when we did the Alex Rodriguez Choose Your Own Adventure in free agency post. I wrote the Bud Selig Christmas Carol where he’s visited by the ghost of Marge Schott on Christmas Eve. There was just a lot of stuff that didn’t really fit anywhere else.

MJD: I remember one morning I wrote something about Michael Vick and I woke up and it had like 850 comments, which I had never experienced anything quite like that. Deadspin had an audience, but 850 comments by 9 AM, that wasn’t something I was used to. And they were all very negative and just general front-page people, most of whom wanted to murder me.

Steph Stradley, NFL blogger, FanHouse: It was wonderful. There was a time where at the beginning we didn’t know each other very well, and some people dropped out and they added more people that were more experienced bloggers, and then eventually it got to the point where I was reading more of the writing on the dashboard than I was on the actual site because I was really interested in reading the writers. There was a time where it was just glorious and people were very supportive of each other, like “You did this post and it was really hilarious.” It was very different than a lot of the writing out there that you were seeing. We weren’t writing things in the boring AP style of writing stuff, and that’s why people went there. 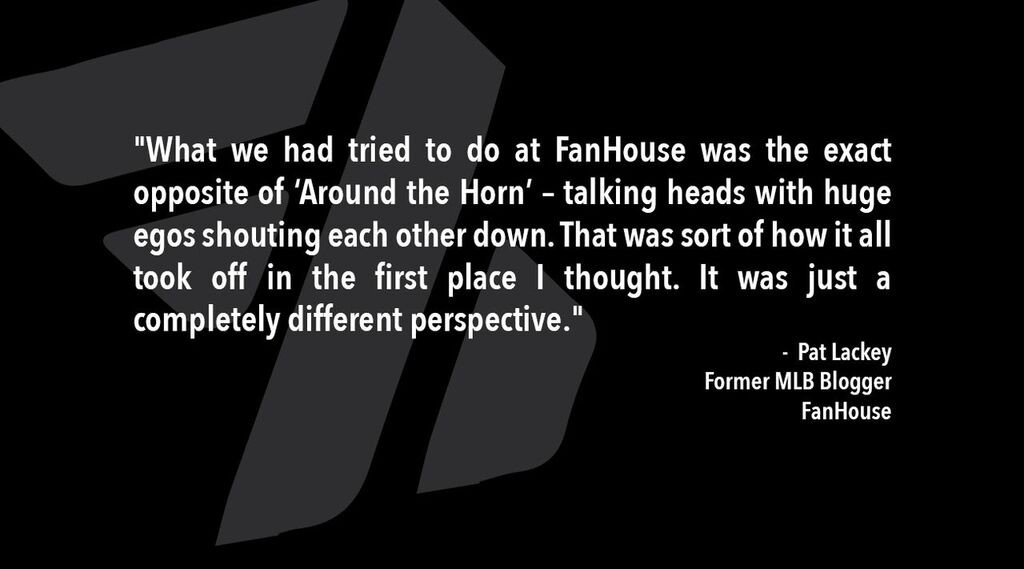 Greg Wyshynski: It was interesting because we all started to do this before, I would say, the vast majority of mainstream media sites were blogging. We were definitely on the frontline of the “Your Mom’s Basement Wars” and people didn’t really understand the thing that we were doing yet.

Pat Lackey: In my mind, what we had tried to do at FanHouse was the exact opposite of “Around the Horn” – talking heads with huge egos shouting each other down. That was sort of how it all took off in the first place I thought. It was just a completely different perspective.

Steph Stradley: At the beginning, pretty much anything you felt like went. As long as it wasn’t dumb. Dumb was bad, but clever was good. The whole website was a response to hot-take culture, really. We didn’t all come from the same perspective that way, but there wasn’t hot takey stuff at the beginning.

Greg Wyshynski: The first event I ever covered as sort of a national NHL writer was the draft in Columbus, which was Patrick Kane’s year [2007]. AOL wasn’t covering travel, so they said “we can get you credentials, but your travel and everything else is going to be on your dime.” So I took a bus from Washington, D.C. to Columbus at midnight because that was the cheapest rate. So it was the effing Star Wars Cantina of weirdos on the bus to Columbus, including the woman who would nervously shave her head with a straight razor throughout the trip while talking to the driver. Once at Columbus, I covered the thing for a couple of days. The more you go to these events, the more people get with you and understand who you are and put a face to the name.

Tom Mantzouranis: It was liberating in the sense that this was the beginning of the time when fans were like, “we know just as much as some of you and you don’t have to be in the locker room to gain some of these insights.” We’re smart, we can watch the game and form opinions of our own and take some of the power from the traditional media, which again, they do their jobs and some of them do really well with it, but it was important to us in that it was kind of the beginning of fans having as equal a voice in covering a team or sport or whatever, and having it recognized as valid.

<<< Prologue: The Creation of FanHouse

The Oral History of AOL FanHouse