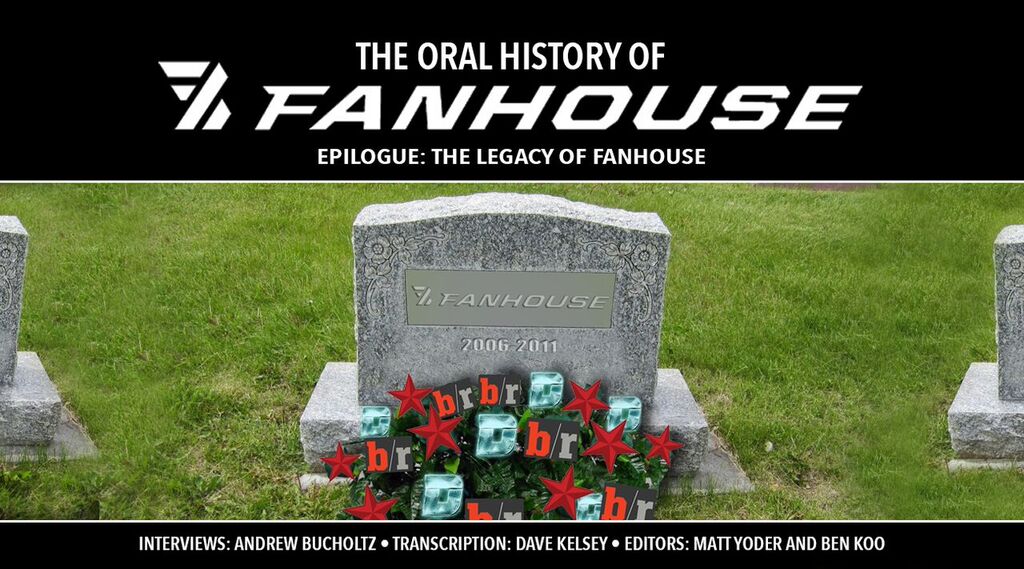 FanHouse effectively died with the Sporting News sale and officially died when The Sporting News opted to let that deal lapse. Its archives, with some of the best sportswriting from the early days of the blogosphere, have been lost and cannot be located. Nowadays, fanhouse.com redirects to AOL Sports (which is again a thing). Some figure the end was inevitable, while others think it could have lasted under different corporate leadership. Some see it as just another sports site, while others see it as much more. Here are some perspectives from those on the inside regarding what it all meant and the legacy of FanHouse.

Eric McErlain, Ravens blogger, FanHouse, then head of NHL FanHouse: It was a great thing while it lasted. I’m sorry it didn’t last longer and I’m really bummed that the content has disappeared into the ether. There was a lot of work there that I was really proud of that is not around anymore, and that’s a shame.

MJD, NFL blogger, FanHouse: It was probably the first attempt to do a large scale organization of good prominent national bloggers. That is something that other companies sort of borrowed the idea from. Yahoo did it, SI did it, ESPN too with various properties. It was a lot of fun, I remember it really fondly.

Eric McErlain: The people who took FanHouse one better and got rich off it were the folks who were the money behind Bleacher Report. Because what they did is they took Jamie’s idea and they melded it with the Blogger platform and just decided we’re not gonna pay anybody. They took Blogger and they branded it with a sports blogging platform and they came up with this entire alternate source of compensation, that I’m stunned people bought into. So content became completely commoditized. I remember when they started out and we saw they were wholesale ripping off content that was written elsewhere, just reprinting stuff from other blogs and we all laughed at them. But I wasn’t laughing at them when Turner bought them, that’s for sure.

J.E. Skeets, NBA blogger, FanHouse: It meant a lot. It definitely gave me confidence that someone like Mottram thought “you could do this, you could be an editor for this little NBA section of a giant online community.” Like I said, I never thought I was that great of a writer, but he was like “you can do it, you may be different than other writers, but you absolutely can do it.” It was a massive first stepping stone for my confidence and just for the podcast and my career in terms of writing. It was unbelievable, really.

Eric McErlain: FanHouse was really, for a lot of people, the first opportunity to get exposed to a larger audience and I was really happy to see a lot of those people just run with it. They did an excellent job. I think that’s the first legacy of FanHouse. Jamie deserves a ton of credit for starting it up and making it work. 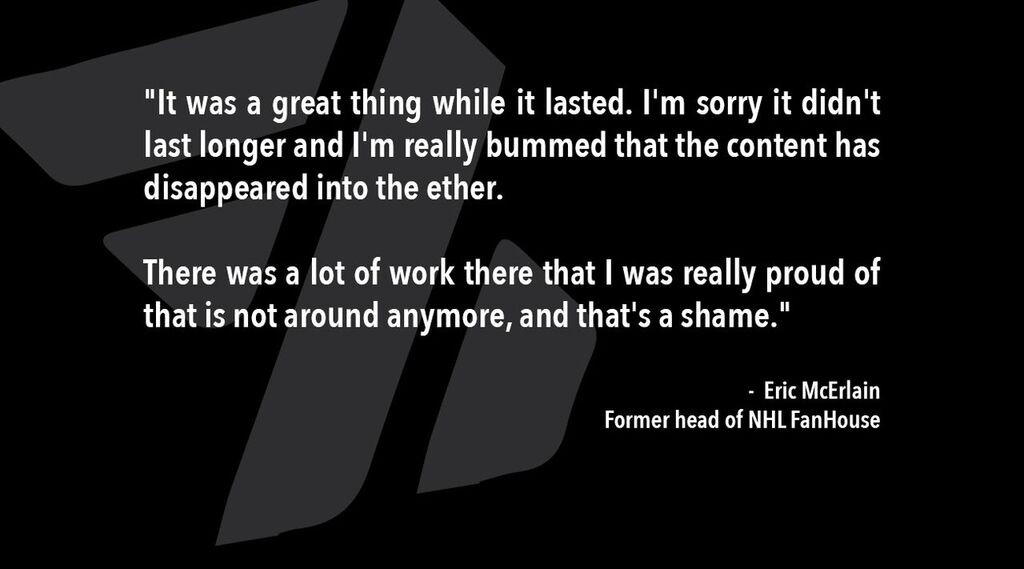 Greg Wyshynski, NHL blogger, FanHouse: It’s awesome that I still get to do things eight, nine years after I started blogging and it’s really cool to see everybody else, at some point going on to levels of success I think they’ve earned by being innovative and taking chances and even if it didn’t necessarily happen for us at AOL, it happened at other places. I think FanHouse deserves credit for having given us that opportunity and kind of given us a better chance to go do better things.

Scott Ridge, executive editor, AOL Sports: You know ESPN is a great, great sports site for sure. I worked there for eight years and I have a ton of respect for everybody. But there were days where I could point to FanHouse and say we were the best website for those 24 hours. Bar none. Bar none.

Spencer Hall, college football blogger, FanHouse, now editorial director of SB Nation: FanHouse was pretty good, but I don’t get sentimental over it. And honestly I don’t remember, I couldn’t name a thing that was written on FanHouse 10 years later. I could not name one piece that neither I nor anyone else wrote on FanHouse. I think it was a happy accident that I don’t want people to sanctify, which I would pretty much say about anything. I’d just like you to remember it accurately. It gave a lot of really cool people their first high-profile chance. I think in terms of mistakes, a lot of mistakes that the people running FanHouse made led to good things down the road.

Jay Mariotti, columnist, FanHouse: It was the best column job of my life for 18 months. If Armstrong had vision, he could have made a killing. Unlike these Bleacher Report and SB Nation sites that use 90 percent unknowns and too many amateurs, we had a staff of accomplished, experienced columnists and writers who’d covered every major event in the world — on site, too, not in front of a TV with 150 words on a blog. Someone would have bought the site for a ton of money. Maybe Arianna Huffington didn’t like sports. Her loss. It was sold on the cheap after the staff was gutted. Everyone lost, all the way around. It’s a shame, because ESPN.com is vulnerable for the first time. One of their writers told me they’re staying at a Holiday Inn here in San Francisco for the Super Bowl. (If it’s a Holiday Inn Express, they could do a commercial.) I’d love to see a serious site challenge them, but the aforementioned sites don’t have the star power to pull it off. These sports web entrepreneurs think they can hire post-frat people on the cheap and algorithmists to get the job done. Readers are too smart for that. They know what’s good and what isn’t.

Mike Diamond, AOL Sports intern: The idea that you could just be a guy on Wall Street that was super-passionate about the New York Giants that studied and read and met people and wrote this great blog, and then all of a sudden you quit your finance job because you are in the locker room and you are a blogger and fast-forward a few years and you are the blogger for the New York Post. That’s real. That is a real thing.

Tom Mantzouranis, Saints blogger, FanHouse, then editor, FanHouse: There was a happy middle ground that could have been found between the very beginning of FanHouse and what it was like at the end of FanHouse. Where you could have hired some writers and covered events and kind of moved towards a more traditional space, without putting the company or business in a place where financially it was doomed to fail.

Shiloh Carder, blogger, FanHouse (as The Sportz Assassin): Honestly, it’s very rare now that you can just make something like that. It felt like it just died, and that it was sad.  You feel like you got ruined, you really do. It was just something that we really loved.

Michael David Smith, NFL/MMA blogger, FanHouse: It sort of merged sports blogging  with mainstream sports coverage. When FanHouse started, there was a big  distinction between “sports blogger” and “sports reporter,” but now  you have sites like ESPN’s massive NFL Nation which is very much a  mainstream sports site but is also essentially a collection of 32 team  bloggers. FanHouse pointed the way toward that.   But the site’s legacy is also that a good thing can fall apart if the  wrong decisions are made. FanHouse could have grown into the traffic  behemoth that Bleacher Report became — and with better content than  Bleacher Report — but instead, it shrunk down into something that  ended up in the dustbin. 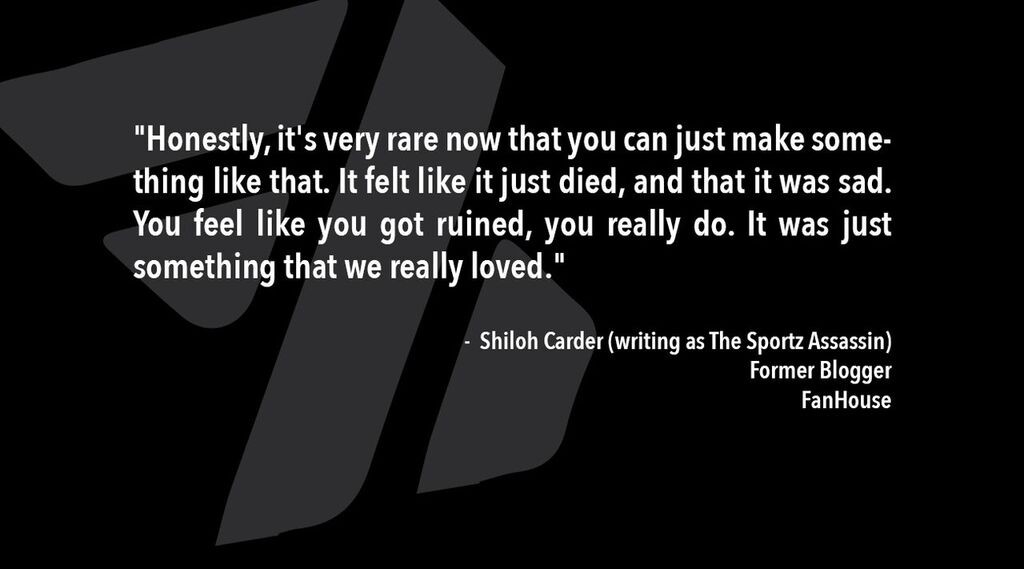 Kate Scott, FanHouse Minute vlogger: It was incredible for me now that Twitter exists, because I’ve been able to reconnect with a lot of people that I worked with on the site. That’s been really cool. I think that it produced a lot of folks who are really well-known, talented sports journalists. I think that it really kind of set the bar for what great sports blogs should be.

Will Brinson, NFL fantasy blogger, FanHouse: Ultimately, any time I run into somebody who worked at FanHouse, I look back and it’s cool because you know you have that connection and I don’t think a lot of people understand how the incredible way in which it flew in a manner… you know, you couldn’t do it now. You couldn’t start something like that nowadays. Nobody would notice.

Neal Scarbrough, general manager/editor-in-chief, AOL Sports: I kind of feel good about it every day when I read SB Nation and blogs around there. You know, we can’t take credit for blogs, but we did take it from the backyard to the front yard and now the front yard is full of blogs and we may have been the first.

<<< Chapter 5: The Demise of FanHouse

The Oral History of AOL FanHouse