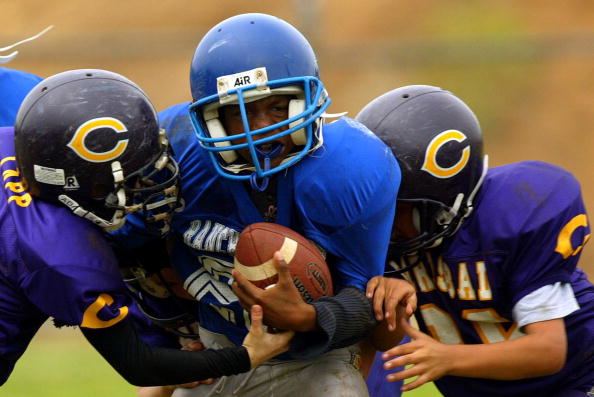 The effort to make football a safer game for kids is taking a giant step forward at some of the youngest levels of the sport.

The ban on kickoffs will be put into place starting this fall with the intent of reducing the chance for injury to kids.

“We are constantly working to make the game safer and better for our young athletes, and we think this move is an important step in that direction,” said Jon Butler, Pop Warner’s executive director, in a released statement. “Eliminating kickoffs at this level adds another layer of safety without changing the nature of this great game. We are excited to look at the results at the end of the year as we explore additional measures.”

This first season without kickoffs at the three youngest levels will be used to gather data that will be reviewed after the season. It may very well be that this is being used as a stepping stone to eliminating the kicking from all of Pop Warner’s levels, which would really be fascinating. Pop Warner will also be reducing the amount of contact time teams may have in practices across all divisions. Practice time involving contact will be reduced from 33 percent of practice time to 25 percent.

Kickoffs at all levels have been amended in various ways the past few years, including the highest levels of the NFL and in college football. There has been talk about the NFL potentially eliminating the kickoff from its game, but the adjustments to the yard line where the ball is kicked and the added incentive for better-starting field position for taking a touchback in both the NFL and NCAA have been used to help reduce the head-on collisions that can be especially violent on special teams.

How this is all covered in an upcoming season of Friday Night Tykes might be pretty interesting. The Esquire Network program has a knack for showing a rougher side to the world of junior football. This might be just the plot twist it needs for its next season.