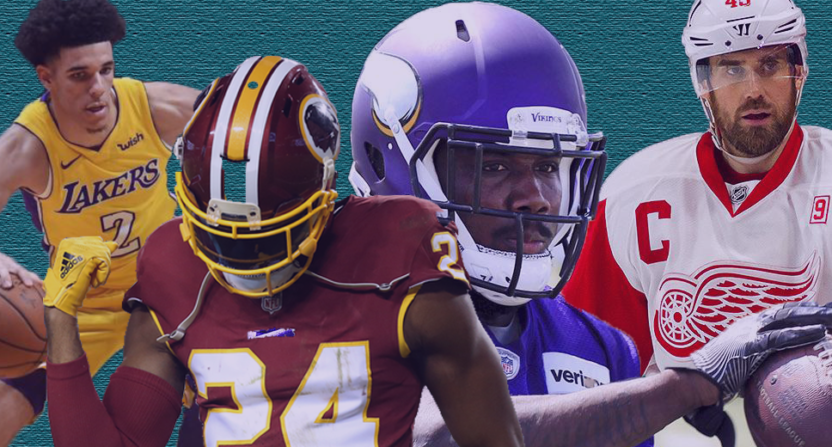 Thirteen North American cities possess at least four professional sports teams in the big four leagues (NFL, MLB, NBA, NHL). Those 13 cities host a combined 64 teams, some of which have sweet nicknames and some of which have terrible ones.

Altogether, which of those cities have the best nicknames and which have the worst? It’s about time we take a look at this and rank these major markets appropriately.

One is a racial slur, Wizards is embarrassingly bad as a replacement for Bullets, and the other two just say “We’re the nation’s capital!” Not a good showing, D.C.

I always thought Avalanche was a weird-ass nickname. Anything that can result in a natural disaster, really. I know it suits the area and the sport, but it’s naturally shortened to Avs anyway, and that means nothing. Rockies is a much better geographically relevant nickname.

And while I’ve got nothing against the Broncos, Nuggets doesn’t sound cool and nobody really knows what it means. “Go small chunks of gold!”?

We get it, it’s hot down there and you’re on the water. The only intimidating animal of the three is the panther.

Get out of here with Ducks, which came from a god damn Disney film. Chargers and Rams don’t signify anything in particular and aren’t that cool. Most of these names (Dodgers, Chargers, Lakers) were put in place in other cities. And when you really think about them, most of them are pretty stupid for a Los Angeles team. Kings is strong, but far from original.

California locations don’t fare well because their baseball and basketball teams emigrated from other cities. Giants is meh and Sharks is a garbage name, and Raiders finished third in a team-naming contest that turned out to be rigged, but they make up for a lot of that with the gold rush-inspired 49ers.

You had me at “The name comes from the signing of the United States Declaration of Independence in Philadelphia in 1776.” That’s about it for coolness, though. Flyers sounds nice, but doesn’t really say carry a lot of weight, Eagles is so-so and Phillies is kind of dumb.

The Vikings were badass and Timberwolves is both apt and badass. The whole Twins thing is a little ridiculous, though, and Wild is an abomination.

I’m totally down with the Coyotes and Diamondbacks (it’s a local snake with a baseball term in its name!), but Cardinals makes little sense (why don’t more franchises change names when they relocate?) and Suns is pretty terrible.

The Jets were given their name because of LaGuardia Airport, for heaven’s sake. The Giants is a little boring, the Rangers is pretty random and nobody cares about the Islanders and Devils. But the Yankees, Knickerbockers and Mets (short for The New York Metropolitan Baseball Club) contain a lot of history. Tons of extra points for that.

North Stars was a cool name for the hockey team when it resided in Minnesota, but shortening it to Stars in Texas was lazy. The rest of them are regionally and historically significant and sound cool. Being named after the Texas Rangers is pretty sweet.

This is all subjective, but I favor nicknames that honor tough animals. The Bears and Bulls do the job there, but Cubs is kind of weird when you think about it. Still, Cubs, White Sox and especially Blackhawks have a lot of cool history behind them, and there are no gimmicky nicknames among the batch.

Patriots is an homage to American Revolution soldiers and Bruins is a more unique spin on “Bears.” Any nickname based on the color of the hose in the team uniform is pretty lame, regardless of the history, but Celtics and Patriots are good historical nods and Bruins is one of the best nicknames in sports.

You have to love names that give a nod to a city’s history while also making some sense. Pistons, for example. And Red Wings isn’t bad either. The history behind that name is quite fascinating.

I’m also partial to strong, fierce animal names and the Lions and Tigers pretty much epitomize that. They’re heavily used, but they’re classics and Detroit definitely got in first. It’s also pretty cool that the Lions were named that as a nod to the Tigers, so the theme wasn’t a coincidence.