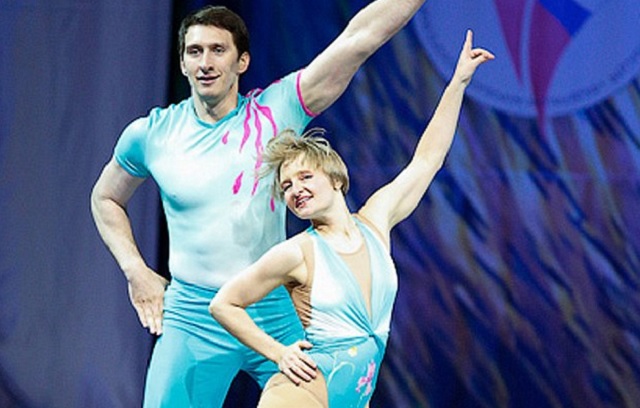 The Russian government has recently invested $30 million into a sport called “Acrobatic Rock N’ Roll,” which I’ve never heard of either.

Here’s a helpful GIF of it:

So, it looks like ballroom dancing mixed with 80’s jazzercise videos, with a little can-can and outlandish figure skating outfits mixed in here and there. Reuters says the Russian government has approved the construction of a $30 million, 140,000-square foot complex dedicated to the sport, which the sport’s confederation says is the first of its kind anywhere in the world.

Why do this? Well, there’s an official party line in Moscow, where the complex will be built. This is a statement sent to Reuters by the Moscow city construction department:

“Moscow attaches great importance to building sports facilities. Over the past five years in Moscow the number of new sports facilities being brought on-stream has effectively doubled,” the statement read.

But there’s always something else in Russia with every move, and this is no different. Vladimir Putin’s youngest daughter, the 30-year-old Katerina Tikhonova (seen above), is quite the aficionado of the sport. She has trained in it for years, competed professionally in it as well, and is now the chair of the Russian federation’s international committee, the chair of its committee for Russian regional development, and a vice-president of the World Rock’n’Roll Confederation. There are only 9,000 registered acrobatic rock n’ rollers in Russia, but they’re committing more money to this sport than they have archery or biathlon, sports they’ve won Olympic medals in. Tikhonova’s ties to it might be a reason why.

This is not an official Olympic sport, but the IOC recognizes its federation. That is of course interesting too, considering WADA just released another report on the massive state-sponsored doping scheme which has been going on in Russian sports for years, and that Russia was just stripped of the right to host February’s world bobsleigh and skeleton championships over doping concerns. There’s no word on how stringent the drug-testing regimen in acrobatic rock n’ roll is.

In case the politics behind this move aren’t your cup of tea, here’s video of the 2013 world acrobatic rock n’ roll final. It even involves Coldplay. Watch in amazement: